Visual novels and dating simulations aren’t exactly booming outside of Japan, but that hasn’t deterred Daidai Inc. from attempting to appeal to English-speaking foreigners with My Neighbour Girl. Complete with English voice acting and a full text translation, it seems like a promising proposition for those wanting to take their first step into the genre. Unfortunately though, the core game is executed so feebly that no amount of bells and whistles can disguise its flaws.

While My Neighbour Girl isn’t technically even a dating sim per se, there is some overlap. Mana Sakura, a student in your class, wants to do well on her upcoming final exams. It’s your duty to help her study each day after school, gradually building your relationship with her along the way as well. Your time is limited, though, so you have to make use of the few weeks you have to prepare her as best as you can.
Each day plays out in a two minute formulaic style. Mana will greet you in the morning and tell you about how much she’s looking forward to studying, you’ll study, then walk home with her. It’s a charming pattern at first, but you quickly realize how little is actually going on in the game. You’re going to want to hold down the skip button to fast-forward through her generic greetings then simply poke at the study options just so you can actually talk to Mana. 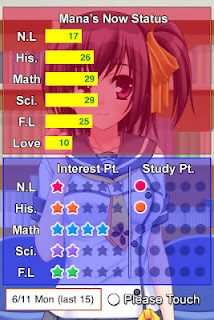 The entirety of the “gameplay” is based in the study section of the game. Mana has various interests and skills for each of the courses, so you need to deduce what course she’ll do best in. This is as simple as looking at her stats and studying accordingly, without tiring her out by repeating the same subject. Once her stats are sufficiently built, you can attempt a hard study session, which will vastly increase your love points if she does well. Sadly, that’s where the depth of things ends.
Once your studying is over, it’s time to walk Mana home. Even though Mana will discuss the more interesting aspects of her life at night, it’s difficult to feel invested in your relationship when the translation is so shoddy and the conversations are “blink and you‘ll miss it”-type affairs.
Depending on how well Mana performs on her exams, you’ll get to see a slice of fan service. While the game builds up to going on a date, seeing her house, and more, all that’s really left at the end is a barely risqué picture of her. Depending on your persuasion that could be very enticing, but it’s certainly disappointing if you were expecting a solid story and even more so if you were expecting something lewd (considering you’re required to be 17 years or older to purchase the app). 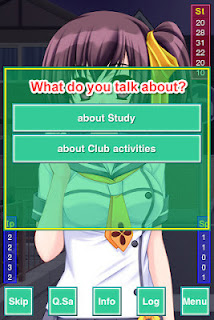 Mana herself is voiced in both English and Japanese, but you’ll want to make sure the voice is turned to Japanese before you begin. Should you leave it in English, you’ll be treated to some of the strangest pronunciations and intonations of a script that wasn’t properly translated to begin with.
While I could simply sum it up in one word as “atrocious”, I have to give credit where it is due. In this case, a small company went out of its way to provide localized text and audio for an obscure game in an equally obscure genre in a foreign country. It’s heart-warming to see that there are developers willing to take a gamble on new audiences without compromising or insulting the intelligence of new players.
Overall, though, My Neighbour Girl is simply too formulaic and lacking in depth for its own good. It doesn’t help that the translation is shoddy beyond belief. The $9.99 USD price serves as an entry barrier rather than help make the game more accessible. Believe it or not, technically superior visual novels do indeed exist on the App Store for better prices.
-Clark A

Solid Snake sneaks into the Smithsonian