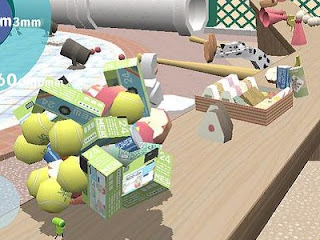 There’s a point where a game becomes too weird for its own good. Touch My Katamari reaches that line and leaps right over it. Underneath the insane colours and nuts dialogue is a really entertaining game, but only a certain kind of gamer is going to give this one a chance.

I’m not going to bother even trying to explain the concept behind this game’s plot and characters; suffice to know there’s a king… thing… that demands you, the prince, roll up stuff to a sticky ball called a katamari so he can swallow the mess and turn it into a star.

Getting into the game reveals that it’s a surprisingly straightforward one. Using the touch screen, you’ll roll the katamari around, gathering up the various objects, animals and people wandering around. At the start, what you can gather up is limited – only the smallest pieces can be added to the ball. But, as the ball grows in size, more and more stuff can be added to it. The game is designed in bite-sized chunks with short time limits, so there’s something of an arcade thrill to rushing around, gathering up a big sticky ball of random objects, while at the same time keeping an eye out for the rare objects worth massive bonus points. 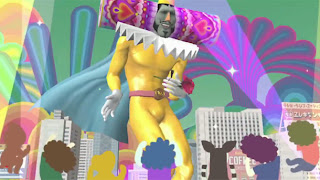 The purpose of getting a good score? Candies. Candies can be traded in for goods to dress the King and Prince up, and other rewards. The game tries to encourage people to play daily, with a “high rollers club” demanding people hit a certain number of candies every couple of days to keep their high rankings.

The game makes good use of the Vita hardware. The touch screen controls nicely, and gives the game a couple of tricks that weren’t in previous Katamari games. Using pinching gestures it’s possible to alter the shape of the Katamari – stretching or flattening it to allow you to push it into tight spots. Such a simple addition does such a great job of throwing some variety into the basic formula, it should give Katamari veterans some new tricks and strategies to learn.

There’s also some good community features tied up with Near, allowing people to exchange challenges to one another. Because this is such a niche title, it’s already hard to come by more than a handful of people playing the game. That’s going to be an even bigger problem later on – though it’s a budget priced game, Katamari really needed the Near features to work – the actual content of this game is incredibly thin and you’ll be done with everything in just a few hours. 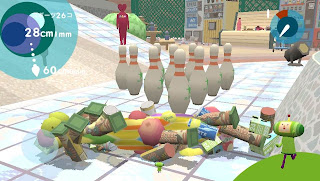 There’s also some DLC which helps people who are less committed to the game to keep on top. Whether micro transactions are worthwhile in a game such as this though… well, it’s not something I’d invest in.

The problem overall with Katamari is that all this superficial unlockable stuff; the entire point of the game doesn’t matter for much when the game is so disengaging. It’s just too strange for its own good. Some will find it humourous and light hearted. That some is the small niche of players already playing this game, and power to them. The rest of us are better off with a Monkey Ball game for our rolling action.