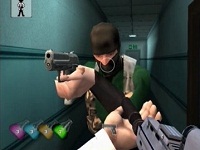 It was around the time of the PS2 that the console FPSer really started to take off. Games like Goldeneye 007 and Perfect Dark on the N64 proved that the genre could be fun on a console, but the dual-stick set up, coupled with the processing power to make the action visceral and dynamic, finally saw the genre hit its stride.

With that said, Skyscraper is not a good example of the PS2’s capabilities in action. It wouldn’t pass off as a good, innovative, original or any other positive adjective game if it were somehow crammed on to the SNES. It’s just terrible. 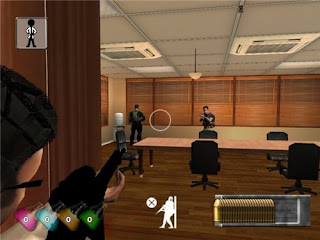 Which brings me to the next problem with the game: the shooting is boring. The controls are clunky and uncomfortable, the enemy AI is beyond braindead, and the guns have all the impact of the Wolfenstein 3D pistol. Perhaps because the developers realised how resoundingly dull the shooting was, they also decided to make the protagonist a ticking time bomb. In other words, the game forces players to run through its levels as the hero’s health continuously depletes itself. There’s some medicine lying about to temporarily reverse the problem, as well as a half-baked excuse to throw the mechanic in there, but it’s neither compelling or convincing. The one attempt to do something different is a cover system, but naturally it doesn’t work very well at all.

And of course just to make the whole experience frustrating to boot there’s puzzles. Almost immediately in the first level you’re hit by the first one, and it just doesn’t get better from there: there’s a broken circuit locking a door that you need to “hack” by flipping tiles to match wires up. Because logic should apparently have no role in puzzles, everything from the wires to the circuits themselves are randomised each time you give the puzzle a go. It’s entirely luck based, and if you don’t believe me, check out the awesome video about for proof. So, in conclusion: one of the first things Skyscraper introduces people to is terrible, irritating puzzles that don’t really make sense, and even after 20 attempts at solving them it was sheer luck that’ll get you through. On the other side? A few more generic corridors, another generic room, a few more generic baddies to shoot and then… another puzzle. 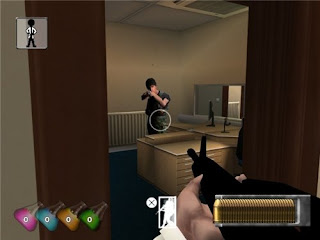 The game does try to be fun, with a storyline that I can only assume is a bid to poke fun at Die Hard. There’s even cake, well before GlaDOS made cake an awesome joke. But I’m not sure the developers realised that Die Hard was already plenty funny and taking things too far ruins the joke. It doesn’t help that the lead character speaks in a monotonous whisper and the plot is far too disjointed to make any sense.

Wolfenstein 3D and the original Doom had more interesting levels, characters, enemies and smoother action than this game. While Skyscrapper is indeed retro, it’s the kind of retro we should all be forgetting about. That it’s on the PS2 Classics download list is just silly.

Review: WWII: Battle Over the Pacific (PS2 Classics on PS3)