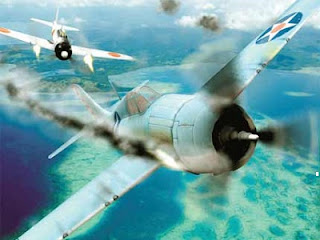 The PS2 Classics currently available download on the PSN are a bit hit and miss. Some are genuine classics, like Donald Duck Quack Attack. Others are dismal, like Seek and Destroy. WWII: Battle Over the Pacific might not be memorable amongst the really classic PS2 titles such as Final Fantasy X, but it does have a genuine claim to be an understated little classic.

As the name probably gives away, this is a dogfighting simulator set during World War II. I use “simulator” loosely though, because this is a very arcade-style game. While the on-screen interface is covered with what appears to be dials and data to track, the reality is you’ll be soaring over the skies and shooting thousands of bullets per minute with some very relaxed flight physics (G-force… what’s that?), and landing the planes is a matter as simple as flying through a few green circles. You’ll be fighting against targets on both air and land, and the action can get pretty hectic. 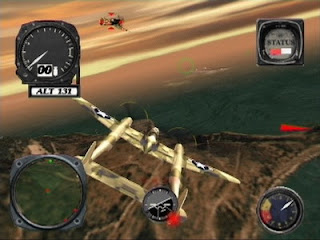 The game does show its age. Compared to modern arcade dogfighters like the Ace Combat games, Battle Over the Pacific does feel fairly pedestrian, but when you consider that missions are only a couple of minutes long each, the game does throw so many objectives at players, so quickly, that it’s often hard to notice sluggish the pace is compared to Namco’s modern opus.

More noticeable is the wasted setting. World War II has produced so many classic stories over the years. This one fails to provide even a B-grade plot. Mission briefings of just a sentence or two in length provide the snippets of story, and there’s not really any characters to follow. Even the player avatar isn’t any more than a name that players input at the start of the game.

The graphics don’t help much either. Planes are pretty generic while landscapes are muddy and don’t look like anywhere in the real world. It’s hard to get a feeling for a life-and-death conflict when it’s hard to relate to anything in the game. 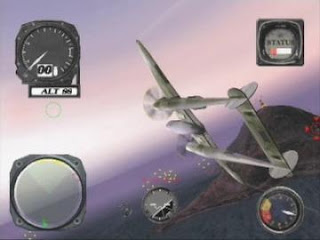 But the action is good, honest fun. It might be a tad slow by modern standards, but it’s fun to run through the levels regardless. There’s some challenge there, and the levels where you’ll use one plane to complete one objective, then land it, change planes then take a crack at a second objective with a more suitable weapon is such a simple idea, but one that helps keep the game fresh.

The campaign is long enough that you’ll get value for money out of the game, and there’s some challenge in some of the missions. Given they’re so short it’s also a game that’s hard to get frustrated with, so most people should be able to make their way through the game.

WWII: Battle Over the Pacific is flawed, but it’s fun. Anyone who’s played an arcade-style dogfighting game should get a kick out of this one.