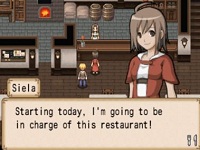 I’m a big fan of the Atelier series of JRPGs. Focusing on collecting materials and alchemy over the combat brings with it a fresh take on the JRPG genre, and couple that with playful and cheerful characters, story and visual style, and you’ve got a series that flies right under the radar in the west, but is a whole lot of fun for its dedicated fans.

Adventure Bar Story is in concept very close to the recent Atelier games. That’s the good news. It’s not pulled of with the same charm, though, and that’s very bad news. 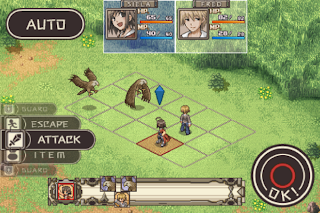 Food is tied up with more than just making money, though. Consuming food is how the characters in this game level up, so if you’re planning to explore the more remote places in the world and track down the rare ingredients to make awesome pie (may or may not be a real food in the game), the characters are going to need to eat a lot of their own produce. But if they don’t make money, the game’s not going to go well for them either. This introduces a nice touch of tightrope balancing to the game – sway too far to either side and you’re going to take a fall.

Combat with the game’s cute characters happens in a standard turn based fashion. There’s not a whole lot of complexity to it, and like the Atelier games, fighting too many battles can get quite dull. This is compounded by the fact that defeated enemies might yield a few ingredients, but no experience. As the same ingredients can be found lying around the game’s regions, it doesn’t take long for the combat to feel somewhat pointless, cute enemies notwithstanding. 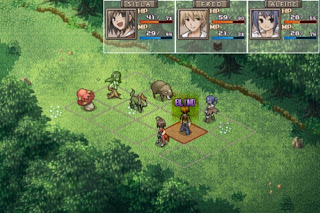 The presentation of the game was, of course, never going to look like a PS3 game, but the story is briefer than a Harvest Moon game. Literally you’re told “get lots of money or the bad restaurant owner is going to shut you down.” That works for a game like Harvest Moon, where people want to kick back and get their virtual hands dirty with some tomato growing. It wouldn’t work in an Atelier game that relies so heavily on presentation and humour, and it doesn’t work here. Put that dull story with the lack of cute Moe characters and any personality really dampens the overall experience. Ultimately Adventure Bar Story feels more generic than it should.

It works as an iOS title largely because it’s cheap and quite simple. It’s just very disappointing that, despite borrowing so heavily from one of the most interesting JRPG series I’ve played in a long time, this one just fails to be engaging enough to be essential.