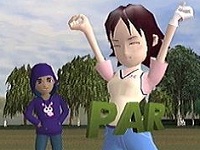 Golf is a hard genre to stand out in. On the one hand, there’s the rather awesome Tiger Woods series by EA for serious golf fans. On the other, the arcade charm of Everybody’s Golf or Mario Golf.

PS2 Classic, Mr Golf, despite trying hard to emulate the charm of the latter, falls down somewhat in the end. It’s still fun, but it’s definitely on the second tier in the genre.

It’s presented nicely, with charming, clean courses and character models that, while last gen, are fun, in a similar sort of vibe to Everybody’s Golf. Indeed, were it not for the actual club swing mechanic, this game could be mistaken as an early edition of that series. 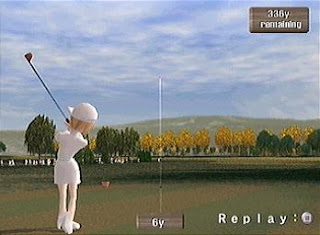 But that club swing action both separates the game from its rivals, and lessens it. Rather than use the traditional “three button push” mechanic (tap once to start a swing, once to determine power, and one final time to determine accuracy), Mr Golf uses the analogue sticks on the DualShock controller. Pull back on the stick to start the swing, then push forwards quickly to follow through.

Now in theory this should allow for a far more realistic level of control over your shots. Pull back just a little way and let fly to hit the ball a short distance, and then be more aggressive on the controller for a full-blooded shot. Unfortuantely, though, the game relies too heavily on inaccurate visual cues to provide player feedback. In theory a short shot should happen if the golfer’s got his/ her club at shoulder level, but that could mean a shot of 45, 50 or 55 per cent strength and there’s little visual feedback to differentiate that range. And in a game of golf, that difference can mean the difference between a great shot, and a bunker. 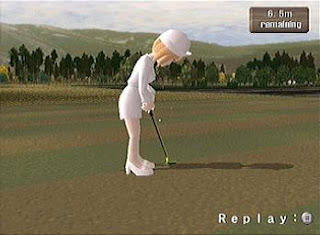 Things get even worse on the green. There, the swing action is more subtle, and assessing putting strength is even harder. The physics of the game also means the lie of the green affects the ball more than you might expect, which is a problem because the game doesn’t like to provide accurate information on the lie of the green.

The lack of information is a reoccurring theme for this game, and golf games can’t give players enough data. With some practice, it’s possible to learn how the game’s physics and visual cues work, and then it becomes a generally enjoyable experience. It’s just going to be hard to convince players to stick around long enough to get to that point. With Tiger Woods and Everybody’s Golf providing a far more accessible experience, that’s an unfortunate early roadblock.

It also hurts that the game’s caddies are infuriating beyond belief. You know; the characters that say “nice shot” when you hit a nice shot? In this game they’ve got the worst voice actors imaginable speaking them. It might sound like a small thing, but it’s a few voice samples repeated over and over again. In the other games, they’re generic-sounding voices that fade into the background. Here they’ll make the ears bleed. Couple that with some very plain music, and this game can become genuinely painful on the ears.

Overall, Mr Golf is a brave attempt to stand out from the pack. It obviously didn’t go down well enough to become a franchise of the same fame as Everybody’s Golf, but golf nuts might get a kick out of having a different control scheme to play with.