It’s not easy being blue, at least in the year 1994. In your ongoing quest to keep the world a nice place to live, you’re endlessly assaulted by an echidna, a gun-toting weasel, and a mad scientist. Unfortunately, it can be equally difficult to survive Sonic’s first Game Gear release on the 3DS Virtual Console. While not Sonic’s poorest title by any means, it’s clear that some extra polish would have elevated his adventure to the heights of the best.
Triple Trouble stays true to the same formula established by the classic Mega Drive games in that you control the quickster and send him dashing through brief stages divided into acts. Tails also makes a playable reappearance and offers the ability to fly through levels rather remain ground-bound. Collecting rings, jumping on enemies, spin dashing, grabbing power-ups, and using the super peel-out are as fun as always.
For the most part, you’ll breeze right through each level without a care in the world. They’re quick and ideal for portable play. With that said, every portion that is not “for the most part” will make you want to crucify the developers. One of the underwater levels may well be the worst designed stage I have ever seen in my many years of platforming, but after such immense levels of frustration, the game reverts to its pleasant state. Similarly, an otherwise interesting arctic level is spoiled by confounding design decisions that make you wonder if the developers had to work overnight involuntarily. 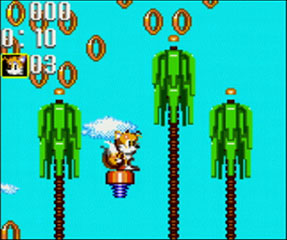 If you can manage to overcome such obstacles, it’s a short and easy game that you could probably finish in one dedicated hour. There are six zones with three acts and several bosses to deal with. Most of the replay value comes from pursuing Nack the weasel into the special zones and swiping his chaos emeralds to get the true ending. Had the levels been better designed, there would be more reason to want to speed through them all again.
There are a few other annoyances, but thankfully, nothing on the level of the qualms I have with the level design. It’s easy to forgive the occasional slowdown when you consider this is a speed-oriented game on a portable with coloured visuals. Still, you have to wonder, whose bright idea was it to have the heads-up display (HUD) get covered by whatever wall or background scenery you approach? Why do many of the power-ups seem to last for half a second? Why is the collision detection so shoddy?
Also keep in mind that there’s no proper save function. If you run out of continues (a decidedly unlikely event in all honesty, given the generosity of lives), you’ll have to start the game from scratch. It’s not much of a time commitment to replay the game, but if this vexes you, you’ll want to use the Virtual Console’s restore points.
Speaking of which, since this is our first Sega Game Gear review at Digitally Downloaded, there’s some merit to mentioning to how well the emulation interface is handled. You’re given numerous options for adjusting the screen size, performance, button settings, and even the blur effect. Most amusingly, you can customize a virtual Game Gear by changing its color. It’s a definite step up from Nintendo’s own efforts, even if it still only has one restore point. We can only hope digital Game Boy games receive a similar overhaul some day. 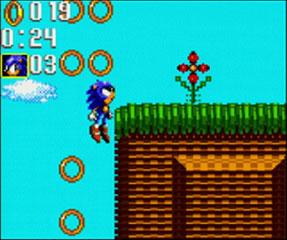 Thanks to the Game Gear’s technical prowess, Triple Trouble still looks the part today. The colourful visuals and superior processing elevate the overall experience in spite of gameplay issues.
On the flip side, the soundtrack is utterly forgettable. Whereas Sonic’s Mega Drive outings featured contagious tracks in nearly every stage, not a single track in Triple Trouble comes off as memorable. Compounded with the rather short level length, these tunes have done anything but stand the test of time.
Sonic the Hedgehog Triple Trouble is a bit of a sad case. All of the fundamentals are there, but many aspects end up misused and too much is rough around the edges. What should be one of Sonic’s greatest portable outings is instead mostly a reminder of what could have been.
-Clark A

Build your backlog with the Xbox Live update