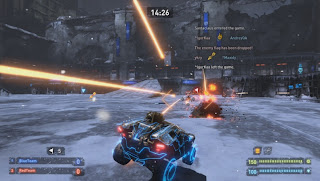 Get in. Get out. The competition doesn’t stand a chance. Unlike the rest, the Assassin is in a class of its own, sniping prey by the dozens before others can line up their shots. No class can compete with the blazingly fast firing rate of the Assassin. Obviously, this is quite an upper hand when taking quick pot shots at your friends online. Of the three announced classes, it’s up to players to make the choice between the speedster Scout, the tough guy Heavy or the quick-draw Assassin, with two more classes yet to be announced.

Gelid Games’ Wheels of Destruction continues to impress. The whole futuristic look combined with the class system for the vehicles really looks like it sets it apart nicely from that other car combat game on the Playstation.

If you’re keeping track that’s three classes down (scout, heavy, and assassin) and two yet to go.