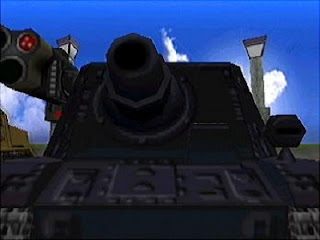 So, every once in a while, these retro games that get thrown up on the download platforms such as PSN and Nintendo’s eShop give us games that remind us just how bad games back in the day could be. Seek and Destroy is one of those games.

It’s really, really unfortunate that the game is essentially unplayable, because in terms of presentation, this is a game that I really, really wanted to enjoy. It has a real plastic toy feel to it. The tanks a cute, brightly coloured little things, the environments are blocky, but charming in a simple kind of way.

The plot (occasional spelling or grammar error aside) is likewise bright and happy; the kind of war story that only a child at play could come up with. It’s not the kind of plot that’s going to have you writing fan fiction, naturally, but it’s more than enough to push you from mission to mission. 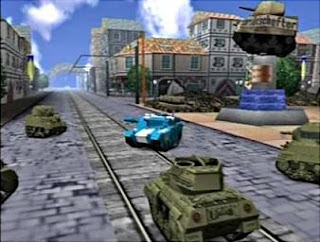 No, the one and only thing that lets this game down, and it utterly kills the game, is the aiming and firing controls. Here’s the thing about putting a camera behind a tank; the turret is going to block the player’s view of the turret’s gun. So immediately you have no idea where you’re actually going to fire the shells before you press the fire button.

Because the shells tend to be quite small, aiming needs to be precise. Because the difficulty of the game can be surprisingly high (being one tank surrounded by many can do that), even in the early levels you simply don’t have the time to experiment with distances and angles and take ten shots to land one. 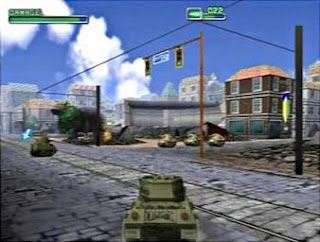 Nominally you’re one tank as part of an battalion, but without contributing heavily to the team (ie shooting down a lot of tanks yourself), your AI buddies are useless and tend to get killed quickly. By the time you’ve lined up a few shots it tends to be too late though.

What could have fixed all this? A simple freaking crosshair. Seriously, a simple “+” to indicate where these shells are going would have make Seek and Destroy a simple, but fun little shooter.

And perhaps I’m going blind in my old age and I missed the “make game playable” option in the settings, so if I did then please let me know in the comments, and I’ll adjust my review accordingly. I’m sure it’s there hiding somewhere, because I can’t for the life of me understand why a developer would not make such a logical addition to a game that is otherwise crafted with reasonable talent.