Donald Duck; there are just not enough games out there that star Disney’s most famous duck. With a horrible speech impediment and a nasty temper, Donald is still one of the most endearing cartoon characters in history, and thanks to the PS2 classics, now we can play one of his better games.

Donald Duck: Quack Attack (called “Goin’ Quackers” in the US) is a surprisingly entertaining, if somewhat generic 3D platformer. It works a little bit like Crash Bandicoot, in that Donald is limited to a small amount of movement left or right, and is funnelled down a very linear path. Along the way, he needs to collect gears. If he can nab a bunch of them in a short time, he’ll also earn a letter. Spell the word, ‘special’, out by the end of the level this way and you’ll earn a bonus. That, coupled with a reasonable time limit keeps the game ticking along quite quickly without becoming frustrating. 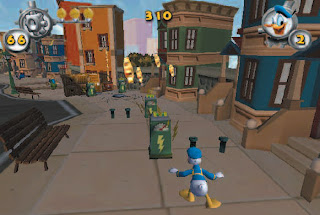 The levels feature the standard kinds of traps and pitfalls, as well as enemies for Donald to beat up on. He’s got a basic punch move, and can of course no platformer would be complete without the “bounce on the enemy’s head to dispatch them” trick. Donald is rather fragile though. Coming into contact with the enemy once will send him into one of his famous rages. A second hit means a lost life. Because of that it’s often better to avoid the enemy, rather than try and knock them out.

The game is split into 24 levels, spread across four themes (the usual here, too – forest, city, haunted house and Aztec theme). The end goal is naturally the rescue of the princess, or in this case Daisy. Some of those 24 levels break up the basic action with 2D sidescrolling sections and boss battles. It’s just enough to give the game some variety, without changing things up too much so the game loses its strong focus and sense of identity.

So far it likely sounds like Quack Attack is a generic platformer, and to be honest and brutal, yes it is. It’s also a little on the easy side, because in most cases Disney want its games appealing to children. 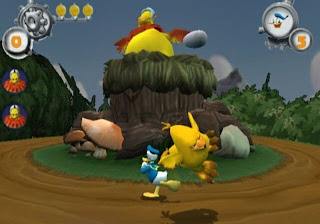 But it’s fun, and raw fun should always been what a platformer is about. Donald’s personality translates so very well to the game format, and it’s hard not to smile, even after the hundredth time he’s been sent into a rage. The controls and physics lack a little bit of weight, but they are precise, and while I didn’t necessary get a sense of impact while playing the game I also never lost a life as a result of anything but myself.

With bright colours and an happy soundtrack, Quack Attack stands up better in a modern era than some of the other PS2 classics we have reviewed recently. Of course it’s not up to the standard of anything we’re seeing on the modern consoles, but it’s more than enough.

And that’s Donald Duck: Quack Attack; a standard and well constructed platformer that is largely there for the young and young at heart. It’s not a game to challenge yourself with, but it is a game to be enjoyed.

Time to bring Donald back for a new game, Disney.