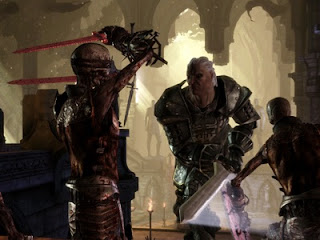 Moreso than even Skyrim, Dragon Age: Origins enthralled and captivated me. It was, literally, everything I could hope for in an RPG. Right from the first moment it had me in its proverbial pocket. It kicked off in style with an hour or so introductory sequence that was tailored towards the kind of character you played. Dwarves would start their adventure differently to Elves, which really played to the advantages that a multispecies RPG can offer; different kinds of players do want to have different experiences. Compare to Skyrim where, aside from the mechanical differences (different species have different skill skews), the experience of the story was largely universal. 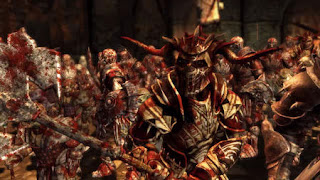 Yes, the plot of Dragon Age: Origins is more linear than the likes of Skyrim, but it’s linear in an unobtrusive manner, giving players plenty of freedom to make their own moral choices and experience those ramifications in a manner that integrated tightly with the broad story arc. Some of the decisions you would make through the quest would have serious repercussions later on, and the game’s morality system was more ingrained in the overall experience than any other game I’ve really seen before or after.

In most ways, Origins struck the balance between exploration and freedom, and the need to tell a story. You were always working towards something, which made the game feel far less aimless than other western RPGs, such as Skyrim, can feel at times, though the plot worked hard to make players feel like it wasn’t holding their hand through it either; you were left to discover much of the story on your own. 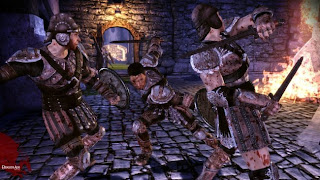 And it was a story that built up beautifully. The final encounter of the game (look away, those few who are reading this that don’t already know the ending), was also the only dragon in the game. The anticipation that you would finally take on this dragon in mortal combat, and the supreme power of it when you did was exactly how dragons should be – awe-inspiring, intense experiences. The only dragons that come to mind that are more capable of inspiring that kind of awe and fear since Dragon Age: Origins are those found in Demon’s Souls and Dark Souls. Skyrim’s flying lizards are more like flying treasure bags by comparison.

The party of heroes that you’d build up over the game are also an eclectic, interesting bunch. Universally well written, albeit taken directly from the book of “How To Produce Pulp Fantasy Heroes,” the interplay between these characters was enjoyable in itself. These days there’s not nearly enough games out there that try and build that “Dungeons & Dragons party” dynamic, with more and more the RPG experience shifting to taking control of just the one hero (Skyrim, Kingdoms of Amalur), it was good to experience a modern throwback to the old Baldur’s Gate days. 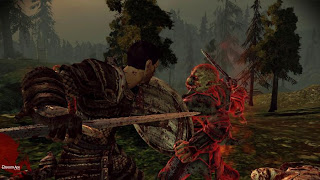 Which brings me to neatly to the gameplay mechanics themselves which, in many ways, feel like an old school RPG. As someone who grew up on the SSI games and then Baldur’s Gate, the way levelling and skill trees worked was a nice hit of nostalgia. Something as simple as pausing the game to set commands before unpausing and watching the action unfold was such a nice, tactical change to the action-heavy RPGs that the industry is so infatuated with was, likewise, a nice way for BioWare to reward its long time fans.

Yes, there are moments that by today’s standards are downright embarrassing: Dragon Age’s insistence that sex is something that should be shown via montage to make the game “adult” is best avoided, and there were ways to “game” the system to become the RPG purist’s mortal enemy; the min-max player. But let’s not forget that Origins is the first in what was meant to be a series. Rarely is the first game of a new IP released free of flaws. Again, in light of that Dragon Age 2 was a tragedy, because the potential for this franchise to hit the kind of mass respect of the likes of Skyrim was definitely there.

And sure the game was ugly as sin compared to the likes of Amalur and Skyrim, but Dragon Age did engage my imagination like no game has done since. I suspect it might be the last of its kind that we see, too, with developers hell bent on adopting MMO, action RPG and Elder Scrolls influences in their own games. Which is a real pity.

There’s been a lot of great RPGs released this generation, especially by the western studios. Which is your favourite? Let us know in the comments!

Australia to finally get an R18+ rating… hopefully