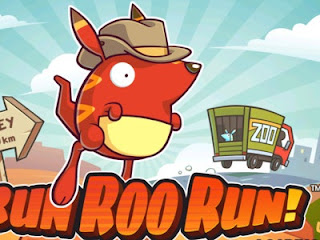 Run Roo Run is how cheap iPhone and iPad games work when they’re done well. There’s no guarantee that this will reach the same esteem as Angry Birds or Flight Control, but it certainly deserves to.

It’s a simple premise. There’s a Kangaroo, and he’s chasing after his buddy, who was captured by some hunters. He starts off in Perth, Australia, and will travel all the way to Sydney in his chase. For those who are a bit behind on their geography, Perth to Sydney is a very, very long distance, and this is reflected with the game having some 400 levels.

Those levels are over in the blink of the eye, but given the startling difficulty of some of the levels (especially the optional “extreme” levels that are unlocked as you go through the main game), Run Roo Run is a game that will last a fair while. Especially since it was designed for five minute bus rides, and it excels at doing that. 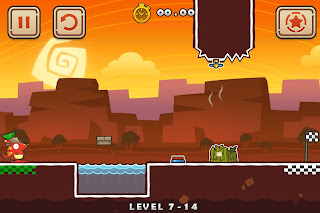 Amazingly, given the sheer number of levels, the developers at 5th Cell have done a remarkable job of keeping the gameplay varied. What starts as a simple matter of jumping over low-growth cacti quickly evolves to include obstacles and aids such as tyres (to bounce off), propellers (to create an upward wind to make the Roo fly) and spikes in the ground and ceiling (which happen to hurt). There are no lives and no way to “lose” the game. Hit an obstacle and get sent back to the start to give it another go.

5th Cell have been generous in building a game that isn’t going to frustrate too many. Get stuck on a level and gain the ability to slow down time to make those pixel-perfect jumps easier. Still stuck? Skip the level entirely. The developers have even been good enough to provide little markers to help you gauge where you successfully and unsuccessfully jumped. Of course getting 100% of those Gold Medals requires you to get through levels without making mistakes, and this is one game where you just might feel inclined to practice to gain that achievement.

Then there’s the slick presentation which goes hand in hand with the precise gameplay to build the game that deserves the Angry Birds throne. The Roo is charming, the backgrounds are vivid and the music is unobtrusive but pleasant. It’s that presentation that really separates this game from the few million other auto-run platformers that infest the iOS devices almost as bad as tower defence games. And yes, the presentation means this is more fun than Canabalt.

5th Cell has found its calling and true home with the iPhone and iPad. Drawn to Life and Scribblenauts on the consoles were quirky fun, but somewhat difficult to justify full retail price for. Run Roo Run was built specifically for iOS devices, and it belongs there. It’s near on the perfect time waster.

Final Fantasy XIII-2; Fans, this game has fixed everything