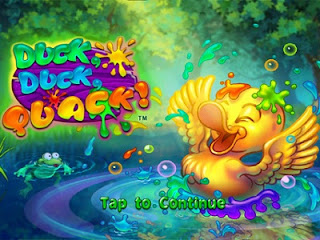 I like Namco Bandai’s approach to the iOS platforms. Bird Zapper, a game it released last year, was a cheerful little twist on the match-3 formula and brought an often underdone genre real production values.

Duck Duck Quack is a similar story. It’s a cute little take on the Zuma-style of casual puzzle game, and while it doesn’t do much to rock the boat (I’m bringing the puns out early today), it gets by on being adorable and great fun.

For those who haven’t played Zuma or one of its clones the game is remarkably simple to pick up. There’s a little path on which a row of brightly coloured balls slowly travel down. By shooting balls from a centrally-located launcher, the goal is to add to the row of balls in a way that causes three of the same colour to match up. They then disappear. If the new gap would mean there are three balls of the same colour left behind, then a chain is created for extra points. If the balls reach the end of the path, it’s game over. 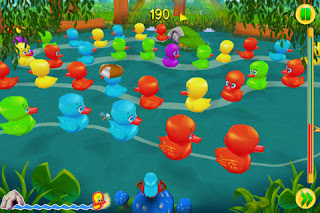 Duck Duck Quack takes that classic concept, and replaces the balls with floating rubber ducks in a pond. They make cute little squeaks as they disappear, and the game’s perspective is shifted from a genre norm top-down 2D style to a lovely behind-the-back view of the arena.

As someone who actually collects rubber ducks, the appeal of this game to me should be obvious. The iOS platforms have seen many rubber duck games released in the past, and they have all been terrible. Duck Duck Quack is, as far as I’m aware, the first rubber duck game to have real production values. The 3D rubber ducks are vibrant and animated nicely. The pond is enticing, and most importantly the game plays well. The touch screen works well to enable precise aiming, and the sensitivity can be adjusted via the options menu to find your personal sweet spot. 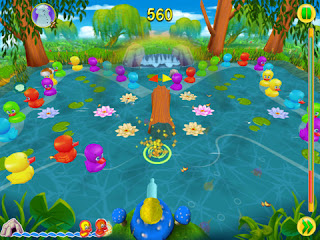 There’s also numerous powerups that appear through the game. These can have a variety of effects, from freezing the pond (stopping the duck’s movement) for a short time, through to painting a big group of ducks one colour. These are numerous enough to keep the action fresh, though that does have the side effect of making the game quite easy.

As you’d probably expect from a game starring rubber ducks, Duck Duck Quack is a family-friendly title. More experienced gamers can still enjoy the game’s charm, though they’ll fly through the levels. The online leaderboards will be the real attraction for those people.

There’s a good range of levels on offer, and two different ways to play. Extra modes, beyond the core game include survival score attack game, and then there’s extensive (and fun) multiplayer that makes use of Bluetooth, Wifi or Game Centre.

Namco Bandai did a good job with this game. It’s disposable entertainment, but it’s charming game and for fans of rubber ducks, well, finally we’re catered for.