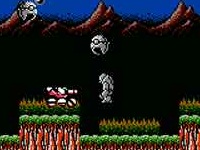 Blaster Master: Enemy Below is a perfect example of what happens when something becomes popular, so something else shamelessly copies it. It has little of the appeal or quality of the game it so faithfully reproduces; Metroid, and is a generic romp that is only going to appeal to the diehards.

The problem is this; though Blaster Master does everything that early Metroid games did, with largely non-linear environments, plenty of jumping across perilously small and enemy infested platforms, and epic boss battles, it fails on every level to better any of the Metroid games.

Where Metroid games had a distinct sci-fi horror atmosphere, Blaster Master has a bland man-vs-robots set up. Where Samus is a character that quickly built a dedicated fanbase (girls in bikinis, even pixelated, will do that), the generic little tank and his equally generic helmeted pilot are difficult to care about. Where Metroid’s namesake enemies were chilling and compelling foes, there’s not a single enemy in Blaster Master that we haven’t seen a million times before or since. This is a game utterly devoid of creativity, and it quickly becomes dull. 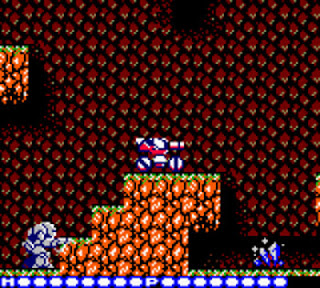 That said, it is a game that works on a technical basis. The little tank jumps around the place with nary a glitch, and the gunplay works. The lack of a duck button does become a genuine pain, but nevertheless you’ll be flying around the levels blasting enemies with relative ease quickly enough. The level design is largely adequate, and tracking down the upgrades to reach new parts of the level (much like Metroid), is a well-trodden structure for a reason.

That said, exploring is an experience that the game does its best to discourage. Enemy placement is often random – leave one screen or area, and come back to it later, and you may or may not find yourself crashing into enemies (or enemy bullets) and taking unavoidable damage. Since the tank itself is nowhere near as robust as a tank should be, this is a problem, and a good validation for why Nintendo didn’t go down this path with Metroid themselves.

The boss battles are the highlight that you would expect them to be, but getting to them is such a slog through boredom that it’s hard to get excited about them.

Throw in a complete lack of story, visuals that are functional, but bland, and a completely forgettable soundtrack, and you should have an idea of where this game fits: if you happen to be a massive fan of Metroid-style games, you’ll get something out of this. If not, you probably don’t want to bother. While Metroid’s quality is enough that even non-fans can appreciate it, Blaster Master most definitely is not good enough.