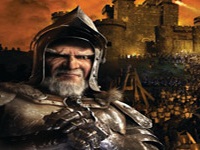 Stronghold 3 is most definitely not your normal fare. The marriage of the RTS genre and city management is an interesting match which sound like a jolly good time to me. However, I’ve been burned before by promising premises that turns out to be poorly implemented which seems to be a symptom of too many strategy games these days.

The castle management is probably the best aspect of the game. There is some interesting fun to be had with the management and building aspect if you can get over the many small annoyances and the poor design of the campaigns. I enjoy games that allow me to focus on building up and dabbling in some sort of combat along the way. Especially when I get the feeling of accomplishment when I have built up something I can admire. So, when the game gives me the choice between a military campaign and a economic campaign of course I’m going to choose the latter because even though the game is in fact an RTS, I figured it would allow for some fun with the building aspect of the game.

Boy, was I wrong. It’s still the best part of the game because combat is seriously broken but there are just so many little things that break the experience. The tight spaces, probably meant to add an extra planning aspect to the game, are just annoying. At least they made them a little less annoying by allowing you to place buildings on top of citizens which was the case before the last patch.

The game has a wealth of resources which you need to use and it can get tricky to balance all of the different currencies you use to build or produce other resources, buildings or units. At times it can get too much of a headache to manage them all and logistics can be mind boggling.

The fact is that although the game seems to give you a whole lot of freedom when it comes managing how you build you economy it’s restrictive in so many ways. So, as an example I played one level in the economic campaign about 20 times because I was curious about just how much freedom the game would allow you to accomplish the required goals.

The logistical problems were pretty straight forward in this example. You needed to grow hops to brew ale and save 300 barrels of ale. You needed to defend the town from brigands and eventually go and take out their lair so pilgrims could get to their destination. On top of that you were on a timer, which in itself is a deal breaker for me in RTS’s.

You look at what’s available to build in this particular mission and you feel good about the variety but when you look closer there are so aren’t all that many ways to complete the mission. You’re only allowed to build one type of armed unit to battle the bandits and the space you are given is tight for the kind of infrastructure you need. I ended up trying loads of different strategies and build orders but I would never be able meet all the requirements in the time allotted unless I used a particular build order and attacked the lair at roughly the same time frame.

I feel like this mission is a pretty good example of the whole game. It is restricting when you want it to be free. You can get around that problem by just playing the free build mode but that isn’t all that fun without some kind of structured gameplay.

I really did enjoy myself for the first few hours. I was the king. Building my castle and creating a place that people would like to live in. Building up an army to defend my people from dangers that threaten my survival. Establishing an infrastructure that will make my town prosper. Managing logistics is a fun brain teaser when it doesn’t get spoiled by petty things like time constraints.

The game has a few choices when it comes to game modes that mix it up a little. The biggest problem though is that none of them are any good. The military campaign is an exercise in frustration, focusing on the worst part of the game, the combat.

Stronghold 3 is suffering from a condition that seems to becoming common amongst strategy games of late. But, I have a remedy. Instead of complaining about it and consider it a flaw we should embrace it and make a sort meta-game out of it. Lets call it pixel hunting. The player tries his best to use his mouse to click on thing in the environment and when he eventually select the desired object he wins. The end goal is the basic playability of the game and the satisfaction of completing simple tasks with great effort.

Sarcasm aside, the combat is totally ruined by the poor implementation of controls. You spend half your time fighting the UI and the other half trying to find the pixel that will activate that unit the is supposed to go and flank the opponent. On top of that, the aforementioned tight restrictions are prevalent in the military campaign as well. The campaign would perhaps have been a little more tolerable if there were more units to choose from in a given scenario especially in the early missions.

I can’t help to wonder what went wrong in the making of this game. There are so many things in the game that contradict one another and it seems like it was designed by a committee of people, each with completely different ideas on where it should go. It’s a shame because it could have been a good game if it was more balanced and had a moniker of a coherent design. There are interesting things in it that get ruined by poor design choices and a bad UI.

Count down to Christmas with Cthulhu