Nintendo’s little pink puffball has been pretty busy of late, across both Wii and DS. And now he’s flying in on a star to try and save the struggling eShop platform. It’s perhaps his toughest mission to date.

For all the promise, the 3D remakes of classic games (creatively called “3D Classics”) that have appeared on the Nintendo 3DS have to date been misfires.

It’s not that the idea is bad; with a 3D coat of paint these NES games always look great. The problem is that the choice of games has been generally poor. Urban Champion is terrible. Xevious is only marginally better. Twinbee is good fun, but is so obscure that it’s never going to be an adequate poster boy for the 3D Classics. Kirby’s Adventure on the other hand, is. 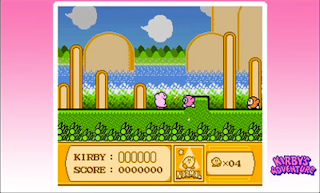 It’s a pity, then, that the game with the best chance of drawing real interest in 3D Classics does such a poor job of using the 3D. This is a 2D platformer that, even on the highest 3D depth settings, barely manages to separate the foreground and background. Sprites are tiny and the screen has been squished down to a small square, bordered on both sides by an ugly, not-in-3D frame. It was probably not technically possible, but it would have been nice to pull of some magic to stretch the screen out to wide screen.

The game itself plays as well as can be expected when considering one of the truly classic platfomers. Kirby has his full arsenal of abilities, and though they’re relatively limited given this was his very first outing, it’s as charming and entertaining as ever to bound around, swallowing enemies and taking their abilities. You all have play a Kirby game, right? If so you know what to expect.

If not, this is a standard 2D platformer on first impressions. Kirby is tasked with moving from left to right and either dodging or defeating enemies. How he does so is where this game (and series’) originality comes. Kirby has the ability to float to get over tall obstacles. More importantly, he has the ability to breathe in nearby enemies. With some enemies he can then swallow them to take on a range of special abilities. Everything from sword Kirby (where he starts wielding a sword), through to flamethrower Kirby (his breath is a line of fire). These special abilities disappear with a single hit from an enemy, and you’ll only have a few moments to recover the power (in the form of a star) before it’s gone for good. Thankfully that won’t happen often as this game is obscenely easy.

Levels fly by and are largely forgettable, though they are laid out in a pleasant fashion. Though Kirby is far too easy, it is worth noting that Kirby’s world is a vibrant one, filled with a surprisingly large range of interesting enemies. 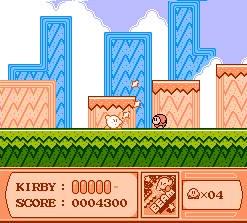 The game progresses in a linear fashion; finishing one level opens up the next. Ever so often you’ll be tasked with defeating a (too easy) boss, and that will move Kirby on to the next world.

There’s a few little minigames to break up the action somewhat. The best of those is the little skill tester (which doesn’t take much skill) minigame, though the rewards aren’t that great – performing well at that will reward you with (unnecessary) extra Kirby lives.

Of course, because it’s so easy, Kirby is also over far too quickly and there’s very little reason to play through the game again. This is a criticism that is applicable to most of the Kirby series – charming but far too easy, so use your experience with those games when deciding whether the original is also for you.

In giving us what we knew we were getting, Kirby is a success – technical issues aside, it’s still a well-produced game. You can’t help but wish the 3D remake was used for a more appropriate game, though. The Castlevania games or Final Fantasy NES titles would just love a 3D remake.

Digitally Downloaded poll results #7: Do you use your consoles for non-gaming applications