What is about the iOS that lends itself to the tower defence genre? Is it the touch screen? Or the nature of the stages that makes them short and readily playable? Is it just that the addictive nature of the genre translates so well into pretty graphics on a handheld device? It’s probably a combination of all those things and more, and Tiny Defense incorporates all these elements in a pretty package to make a game that exemplifies the genre and will keep gamers going for hours.

The iOS market is saturated with tower defence games and, as such, they are all fairly derivative of each other. What separates one game apart from another though, is the execution of the gameplay and any variations or original concepts on show. Tiny Defense offers both good execution and an occasional gem of inspiration that sets it apart from majority of the other tower defence games out there. The one game that it doesn’t match up to is Plants Vs. Zombies, though it is clear to see that Tiny Defense draws majority of its inspiration from it. In saying that, no tower defence game I’ve played since PvZ has measured up, so Tiny Defense is still doing well. 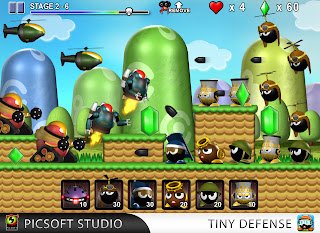 With a weak storyline that neither adds nor detracts from the overall enjoyment of the game, Tiny Defense pits your “Minirobots” against the onslaught of “The Machines” who have come to take over the world. Minirobots are your defensive elements and, with 40 unique units to choose from, picking the right combination for the stage and the enemies is vital to success. A cute feature of the game is the inclusion of the “Robopedia”, an almanac of all the robots you come across in the game, each with their own little story and description. Some of the units will be familiar to tower defence aficionados with classics like the power-production unit (Fusor Bot) which you need to create green gems to buy new defenders, the straight-shooting unit (Gunner Bot) and the wall unit (Blocker Bot) all making an appearance. Other speciality units are also available and provide an element of originality because of their uniqueness.

The game design itself is a little different to most other tower defence games, in that the screen is a 2D stack (stages reminiscent of classic side-scrollers like Super Mario) and this means that units must defend straight ahead as well as against aerial units and underground attackers. The graphics are cartoonish and cute, each unit is easily identifiable and the controls are perfectly responsive to the touch screen. Added to this is the fact you get 150 levels, mini-games, Game Center integration and a star-rating system for each stage as well as a load of unlockable content, achievements and upgrades, all on one purchase. 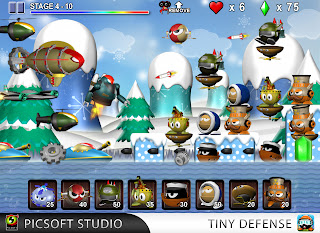 Tiny Defense is a great representative of the tower defence genre and, while it may not live up to the polish and class of Plants Vs. Zombies, it manages to carve a little niche for itself. For gamers looking to find a replacement for PvZ after finishing it, you could do a lot worse than Tiny Defense. For first-time players of the genre, Tiny Defense will ease you into the genre, it will hook you with its fun gameplay and it will keep you coming back for more until you unlock every robot, earn every achievement and get three stars on every level. Definitely one of the better games in its class, Tiny Defense is worth checking out.

Sonic the Sketchhog races to the App Store