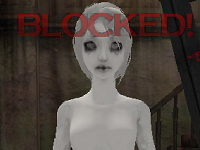 It was inevitable that the first ultra-hit iPad/ iPhone exclusive game, Infinity Blade, would attract clones. The Dark Meadow is the first. It looks the same (same Unreal engine, in fact), plays the same, and is very nearly the same game.

Except spooky. Or, at least, it tries to be spooky. Dark Meadow takes place in an abandoned hospital. So yes, it’s one of those games; disturbing experiments, disease-coloured walls, crazy doctors, the works. The game itself plays out in the first person but like Infinity Blade, you’re not free to move about. There’s a series of glowing nodes on the floor showing you the spots you can move to. From those locations you’re free to look around, so the game ends up with a strong point-and-click adventure vibe.

Every so often a monster will pop up that needs killing. This too plays out in first person, and there’s two different ways to do the killing. The beastie will start the encounter out from quite a distance away, and your character will pull out a trusty crossbow. Pulling back on the string using the touch screen loads the crossbow up, and then it’s just a matter of aiming and releasing. If the bolt hits the enemy it does some damage, with bonus points for hitting him in the face.

Of course, he’s shooting back at you, too, so you’ll need to dodge out of the way when you see a projectile coming your way. 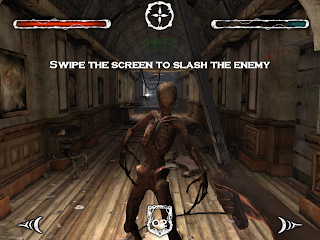 The only real problem here is that aiming is a fairly clumsy affair, especially against the faster moving enemies. Not broken, just not as smooth as I’d have liked, and far too easy to pull the aim high and send the bolt over the monster’s head.

Eventually, though, the monster will close to melee range, and then it’s time to replace crossbow with sword. This part of the game plays out much like Infinity Blade, minus the ability to deflect your opponents attacks. Here the objective is to read the direction in which an attack is coming, and then dodge left or right, or alternatively use the shield icon at the bottom of the screen to avoid taking damage. The enemy monster will be temporarily stunned after an effective dodge, and that’s when its time to do some slicing of your own.

Without the ability to parry the enemy attack, Dark Meadow’s combat immediately comes off as inferior to Infinity Blade. There’s less skill involved in getting through this game, and while the monsters have different attack animations, it’s far easier to avoid taking damage when there’s only three possible responses on your own part. Enemies get harder, but only because they have more hit points, do more damage and act faster, not because they develop any particularly frightening special abilities.

It’s still compelling enough, though, since killing enemies rewards experience and the game has a full levelling-up structure. It’s heavy on the grinding (especially since the game’s environment is actually quite small, and each time you load up the save file, you find yourself starting in the same room), but rewards come fast enough that it’s hard to notice.

Gold is plentiful in the game, and you’ll need it, since there is a lot of equipment to buy, and the best equipment can cost, literally, a million to buy. But here, again, the game’s simplified things compared to Infinity Blade, and for the worse. 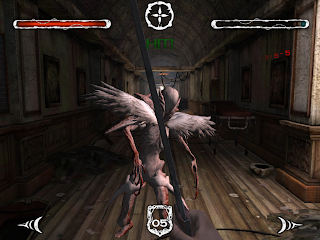 Not so in Dark Meadow, which follows the tried-and-true RPG strategy of “the more you spend on it, the better it is.” Because combat is so simple there’s little the developer can do to encourage players to be strategic about equipment decisions.

It’s a real pity that the game is such a one note performer, because there are some compelling moments. The story is told through a delightfully dry and self-referentially funny man who speaks to you through an intercom system, as well as newspaper clippings and diary fragments that give you the jigsaw one piece at a time.

And it does look spectacular. Environments are detailed and monsters are suitably ugly. While Dark Meadow really did need a more compelling combat system to be a good purchase, there might just be enough here to divert anyone that sunk hours into Infinity Blade.

VVVVVV is coming to 3DS eShop