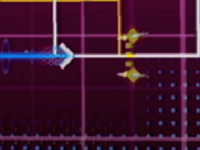 See, if Nintendo was serious about this whole digital download thing, it really should be giving Nnooo a whole lot of money and asking the small, Sydney-based indie outfit to make a lot of games. It did a great job with the original Pop on the Wii, and Pop+ Solo on DSiWare, as well as a bunch of cool little of applications under the MyLifeCollected brand, also on DSiWare.

With escapeVector: Chapter 1, Nnooo has returned to WiiWare, a service in a very different position to how it was back when Pop was a launch title for the platform. Back then WiiWare was the promise of a whole new way to access Nintendo content. Now it’s on its last, gasping breaths, and the chance we get anything that even comes close to the quality of escapeVektor is slim indeed.

So as a last hoorah, then, what are the WiiWare faithful going to be playing? To get the superficial out of the way from the outset, the music and visuals within this game are superb. Minimalist, but you get the feeling that Nnooo and Nintendo should have branded this as an Art Style game. It’s as clean and classy as anything Spike has produced, which makes it a very easy experience to work though. 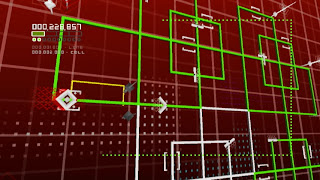 In terms of gameplay, escapeVektor is a very modern, and very abstract take on the basic ideas that run Qix. In this game, you play as a little arrow sign, that needs to navigate around a variety of wireframe levels, filling them in by tracing all the way around the edge to form “boxes.” Colour in enough boxes, and the exit will open, leading to the next level.

Of course, it’s not that easy, because there are a variety of enemies in these levels that are there for no other reason than to make your life hell. From the basic line enemies that travel in a preset path, to the more aggressive circles and triangles that are capable of changing direction and even following you.

To make things even more challenging, some levels have strict time limits, and many also have gates that, once triggered, generate an electric current that means instant death to run into.

The little arrow is not completely defenceless, and has bomb and boost abilities to destroy enemies and accelerate faster, respectively. Nnooo does a good job in introducing these new tricks and traps at a quick clip, and even more impressively, does a great job of introducing them in an organic way that requires little reading or tutorials. That you can ease into the game without a dedicated tutorial or instruction is a glowing reflection on the developer’s understanding of how games are played, and makes the game look like a very professional production indeed. 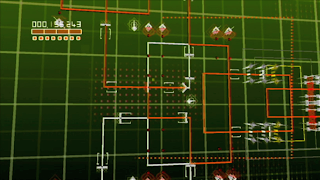 Despite that gentle introduction , Nnooo knows how to make a game challenging. escapeVektor is often very challenging. Occasionally it’s frustratingly so; the nature of this game means everyone’s going to have pet hate levels that they get stuck on, and as there’s no level skip option, you’re on that level right up until you finally complete it. That style of old school difficulty means that getting through all the levels is a rewarding process, but it also means that some people won’t get that far.

Levels are laid out in a very similar fashion to modern Mario games – as in a grid of nodes that you can move between within a series of distinct game “worlds.” These paths also branch in a very limited fashion – some levels have alternative finishes that, once achieved open up bonus levels.

Which brings me to the only flaw in the game: there’s little reward to unlocking and completing these bonus levels. You don’t earn anything in-game rewards from those levels, and though the game keeps track of your high scores, there’s no online leaderboards to get the perfectionists going. Coupled with an abstract and highly minimal plot, the only purpose for completing this game is to complete this game.

It’s also a short game, but it’s only 500 points and that very entry level price, it’s very good quality, entertaining and often challenging short game. Nnooo has more games planned for this little series, I just hope that they also consider some of the other platforms for the next so that their game can get the exposure it deserves. And sitting on a dying platform is just not going to provide that.

NBA Jam: On Fire edition coming to Xbox Live and PSN next week