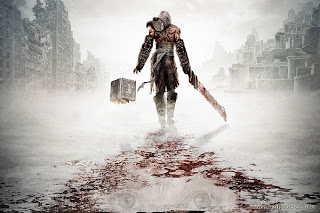 One of the things that has always confused me about the games industry is the many of the fans themselves, and their insistence that they’re paying too much for games.

When you break things down, that’s not really the case at all. Doing a quick bit of maths turns up these results: if you buy a DVD for $15 and you watch it three times (which would be most people’s average across their DVD collections, I would suspect), it comes out at $2.5/ hour entertainment. Buy a $50 game that lasts 15 hours (which is short for a modern blockbuster game, considering how many hours people pile into multiplayer), comes out at $3.33/ hour – not much more at all.

But that attitude of “this costs too much, I’ll buy it second hand/ on sale,” persists. It’s confusing, because that attitude hurts the industry that gamers supposedly are fans of.

When a game is released, the RRP is not there to try and gouge gamers. That’s the price that developers and publishers have set as “fair,” i.e. something that lets them work at comfortable margin, while giving players something content in return that is appropriate for their investment.

Is it a good idea to give publishers and developers a decent margin for their work? Absolutely. Here’s five reasons why:

Right now, a single underperforming game can sink a developer, or in some cases, critically acclaimed games and even unfinished games can skin developers. Why? Because they work on thin margins and very tight deadlines. If development time gets blown out, or something goes wrong along the way we end up with a bad game or the publisher ends up putting a substandard game into the market.

Another common complaint amongst gamers is that there’s not enough creativity in the games industry now. It’s too reliant on sequels, they claim.

But the problem is that it is very, very expensive to create a new, successful IP. From developing a concept out, to publishing the first game (which is nearly always a release that performs marginally well at retail, at best), to marketing a new product (much harder and more expensive than a brand name that’s already established); creating new games required financing that many publishers and developers just don’t have access to these days.

If publishers were receiving fair profit from their investments, they’d be able to greenlight more risky projects. Then we would see that creativity return to the games industry. When every game doesn’t have to rival Call of Duty for sales, we’ll start seeing more ambitious RPG and puzzle games. We’ll see FPSers that take some risks, rather than crib a formula entirely from Activision.

And there’s a second angle to this point – part of having an industry that can truly embrace creativity is having developers all around the world. Right now, it’s almost commercially impossible to have development studios in places like Australia. Margins are too thin and the strength of the Australian dollar means that the costs of developing a game here for global export have escalated dramatically.

For the sake of the industry we want successful developers in Australia, Japan, Brazil, even the Middle East and Africa. We’re not going to have that as long as publishers keep fighting with margins.

It helps keep prices down

Here’s one of the big ironies: the more people buy games on sale or second hand, the more prices go up. Sales are not good for publishers, they usually mean a boost in sales numbers, but profit from the game, if anything, drops. Second hand games cost even more.

If, hypothetically, everyone bought a new game at $60, then the publishers would have a great deal more certainty in terms of sales forecasts. Currently, when a publisher sits down to decide what to price a game at, it has to take into account everything from review scores (bad review score means more players wait for it to be cheaper), to how many copies are likely to be traded in and then sold second hand. This means, to try and make a profit from a game, the price of the game needs to be inflated at launch, to maximise the short window the publisher has to make money.

With certainty, a publisher can afford to be thinner on the margins on each individual game, because they’re able to more accurately forecast sales. Prices go down, everyone wins.

It eliminates DRM and online passes

This one’s a bit simple and obvious, but if second hand sales and piracy weren’t a problem for developers and publishers, then there’d be no need for DRM and online passes.

Given that a substantial numbers of gamers object to this as much on principle as any real difficulties they’ve experienced with it, getting rid of the “dirty words” can only be a good thing for making the games industry a cheerier place to be involved with.

It means bigger and better games

Publishers and developers who are successful don’t tend to sit on their cash reserves. They’re not Scrooge McDucks with vaults filled with money that the managers take regular baths in. No. Profit is almost always reinvested, in new projects and in bigger projects.

Look at what has happened with Call of Duty. The production budget of each game is bigger and bigger because each game sells more copies. That means that the Call of Duty fans get more for their money next time.

It’s expensive making good games in the modern industry, and I would personally love to see the fans start to stand behind their favourite companies and consider their game purchases as being investments, rather than expenses. The payback when a publisher and developer combination are successful is far better for gamers than when a game bombs, after all.