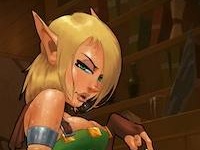 I was all set to pull out the red pen with Dungeon Defenders. It’s not a bad game, but it’s a criminally average tower defense game at its core. As I was playing through the generic levels I realised that I’ve already played this in a bunch of games on the iPad – Vampire Rush, for instance.

But just before I sat down to write the review, I happened to be online at the same time as fellow staffer, Nick, who also had time to burn and a copy of the game. So we got to playing some coop defence.

And that’s when it clicked. Dungeon Defenders is an awesome game.

Nick’s squire met up with my apprentice wizard, and we started laying down the foundations for the first few waves on a map. Each character in Dungeon Defenders has a unique set of traps to deploy, and towers to play with, and this is the first area in which the game excels in multiplayer – different traps and towers from different characters work well together. For us in those early stages combining the squire’s spiked blockage with the wizard’s missile towers sitting behind them made for a lethal combination to the greenskins swarming in.

Then the waves started to get harder, and we needed to start scrambling to keep them from reaching the giant purple crystal we were tasked with protecting. The worst was the introduction of flying beasties, as they glided over our defences and Nick, with his puny little sword, had difficulty reaching them. Thankfully my character’s personal attack (see, in Dungeon Defenders, your characters are also able to fight the hordes, hack-and-slash style) was a magic missile from his staff, so I hung back to deflect the fliers, while Nick focused on running around, shoring up the ground defences as necessary. 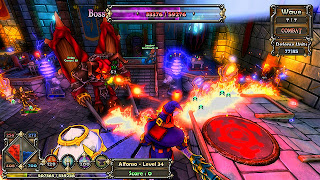 We had no voice chat, and didn’t need it. A single button allowed us to leave a “hey-yo” marker to act as a beacon for our team mate to let him know we needed his support, and that was enough. Then the big troll beastie that acted as the boss for this particular map popped up, and the epic fight began. From hastily constructing towers to slow the troll down briefly before he shattered them, to attacking him personally, that final battle took some doing, but he fell eventually.

What did we have to show for our efforts? A crapload of loot. The game drops loot like the best Diablo clones, allowing us to customise our heroes to a great extent. On top of that it’s possible to level up equipment (and choose what skills that equipment becomes ‘good’ at), as well as level up the heroes themselves. With each experience level comes the ability to apply skill points to either the hero’s personal statistics, or the towers he constructs. Then, at special milestones, additional abilities and more towers become available for use.

As you can see, there’s quite a bit to this game, and while it’s a real grind in single player, the co-op element is so finely tuned that it’s close to the perfect co-op game. Every skill has its role in the jigsaw puzzle that is the team’s overall defensive strategy. Play with less than four players, and the loss of those team options is keenly felt. 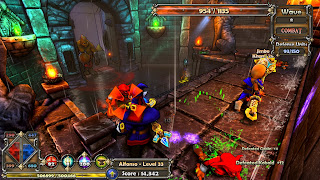 It’s still possible to solo your way through the range of maps, but it’s not just as much fun. Nothing about the game’s presentation helps there either. Character models are decent, though unspectacular and the different bits of equipment don’t actually do much to change the character’s appearance. There’s a sense of humour about the game, but it’s only good for a smile or two. The music is wholly forgettable.

Even the pace of the game, slow and methodical, has been designed around multiplayer. Played solo, a game pacing that has been designed to allow people to react to their friend’s cries for help can feel disappointingly glacial.

The best comparison I can think of, then, is Gauntlet Legends on the N64. That game was a wholly uninteresting arcade hack-n-slash in single player, but with a group of friends, it made the game worthwhile. I can only recommend Dungeon Defenders if you are going to play multiplayer. For that group of people, though, it’s essential stuff.