Let’s face it – some games hold up well over time, while others plainly do not. A game like Super Mario Bros. plays just as well today as it did in the eighties, but other titles are not so fortunate. T.N.K. III is an anomaly, though, in that it offers dated gameplay combined with an uninteresting theme and presentation, yet still manages to deliver short bursts of entertainment. With enough fumbling around with settings, many people will be able to derive some enjoyment out of it, thanks to the new features offered in this PlayStation Minis version.
The game is presented from a top-down perspective (or bird’s eye view if you will). The player commands a tank that is armed with two forms of artillery – machine guns and cannons. Your goal is to progress through the various areas whilst disposing of soldiers and fellow tanks. Tanks are generally conquered by stealthy manoeuvres and cannon shots while soldiers can be shot or run over. 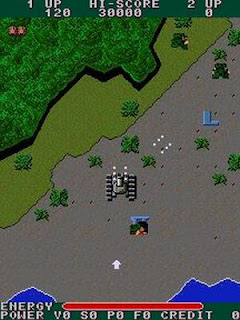 Your tank is capable of firing in eight different directions with both of its weapons. Your health meter is depicted at the bottom of the screen and can be replenished through the use of power-ups. Should you run out of lives or continues, you will have to start from the beginning. Of course, using the optional save feature, you can suspend progress or cheat your way to victory. It’s all fairly standard stuff, but the mobility and optionally open-ended nature make it more than the sum of its parts.
The controls are a tad stiff and take some time to adapt to, but you’re not going to curse them either. Instead of simply having the tank’s top cannon aim at the direction that your tank moves in, you need to control it by using the two shoulder buttons. The machine gun bullets, however, are reliant on the direction that the tank is facing. This factor can both beneficial and detrimental depending on the situation, but it will likely cause some confusion among players even after they grasp it. These people can use the decidedly riskier automated controls.
T.N.K. III can be quite challenging, but thankfully it feels like a mostly fair game…aside from its occasional tendency to throw a barrage of things at you with no holds barred. While Alpha Mission’s extra settings did not refine the experience for less competent players, T.N.K. III offers an option to turn the terrain off completely. What sounds to be a ho-hum tweak actually makes the game decidedly more fun, since you can spend time completely ignoring enemies and just explore the stages.
Aurally, things tend to be underwhelming and a bit bland. Aside from the title theme, the soundtrack is virtually nonexistent in-game. You’ll be hearing a bunch of garbled retro gun-firing noises, though this may actually appeal to some. Overall, there’s really not much to say about the music, since this is one of those games you’ll want to play with the sound off whilst listening to a good album. 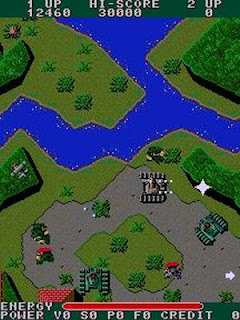 The visuals are quite antiquated, yet they still get the job done for the most part. The varying environments help to keep things fresh, though it can occasionally be confusing to differentiate the territory you can traverse from the areas you cannot. You can tell the developers tried to inject some realism back in the day, because upon squishing a soldier, he will turn into a pixelated crimson mess.

T.N.K. III won’t win any awards for outstanding game design from today’s gamers, but it’s still a mildly entertaining little game. It is best enjoyed when defying the basic rules of the game, but perhaps this is why it is successful. If you can discard any lofty expectations and simply try to enjoy it for what it is, you might just end up with a memorable retro experience.