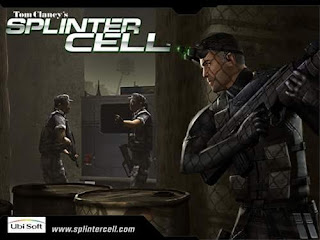 Tom Clancy’s Splinter Cell doesn’t look good in HD. It looks sharper, sure, but especially in cut scenes the animation is stiff and the facial movements of characters as they talk to one another is embarrassing. LA Noire this is not.

In-game, Splinter Cell does its best to remind you it was a PS2 game originally, too. Clipping is a problem, Sam Fisher has the magical ability to float over steps, and environments are largely empty of anything superfluous to the task at hand.

Indeed, the HD coat of paint makes these flaws more noticeable and uncomfortable than back in the day; with the clarity of these visuals the previous-gen corners that were cut are less forgivable.

The game itself remains eminently playable, and indeed it’s nice to be able to return to a more subtle style of game in the day and age of Michael Bay wet dream Call of Duty and clones. With very limited ammunition for a very small range of guns, Sam Fisher needs to sneak through exotic and highly guarded locations to do the James Bond thing and take down world terrorism.

Unlike Bond, Fisher has little class; he’s the all-American super spy, focused on the job and the protection of patriotism rather than womanising and downing martinis. Splinter Cell has Tom Clancy’s name attached to it for good reason; for good or bad this game is very earnest in its American heroism.

This video is from the PS2 original game. It doesn’t look much better on the PS3 in HD, but Fisher’s moves have remained just as cool as ever

But he does it stealthy-like, so it’s fun anyway. The main cover Fisher has is the darkness; as long as he crouches down and remains in a pool of darkness, he’s almost invisible. He can shoot light bulbs to create additional pools of darkness, though he’ll need to be careful – guards notice when lights are taken out and they notice dead or unconscious bodies lying on the road (Sam is best served moving those to a dark corner). There’s also security cameras to deal with. Raise the alarm, and Fisher’s limited weaponry won’t last that long.

As a result, there’s a lot of waiting and patience involved in this game. Patrol routes need to be learned, and areas need to be properly scanned and scouted before an path of attack opens itself up. Luckily, Fisher has a number of gadgets to help him out there, from the mundane (lockpicks) through to optical cables to see through locks. He’s also an athletic kind of super spy, able to make use of ziplines, rappel off walls to gain extra jump height, and perform his famous wall split maneuver, where he’ll plant his legs on either side of a narrow corridor to keep himself elevated, even as the oblivious guard passes underneath. 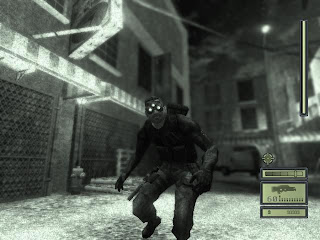 The game makes effective use of noise and music to build suspension. If guards are alerted, than a panicked music track will cut in. Otherwise, the game relies on ambient sound to complement the creeping. Even all these years later, sneaking right up behind a couple of terrorists to hear them give up the clue to the next objective, completely unaware of your presence, remains a genuine thrill.

If only the AI were up to scratch, though. As ugly as the game is, the victims of Fisher’s heroism are stupid to match. The preset patrol routes are easy to justify. The fact the AI forgets Fisher ever existed if he hides long enough, is more confusing. These virtual goldfish are incapable of maintaining a train of thought, and though this makes sense in that Splinter Cell still needs to be a game, all the dramatic tension of being a spy disappears entirely when Fisher just needs to duck down under a broken light for a while for the game to forgive an error. The higher difficulty levels make it easier for Fisher to die, but at all times Splinter Cell reminds players that this is indeed a game.

There’s also a lack of red herrings. Though Splinter Cell is far less linear in both approach and presentation than the modern shooters, it’s still a preordained destiny. What made the classic N64 shooter Goldeneye so effective was that it was possible to complete levels (especially with the lower difficulty settings), without seeing everything. Because of that, it felt like there was freedom to explore, and the strategic part of the brain was engaged in deciding what to explore, and the order in which to do it. Splinter Cell does lack that kind of freedom, deciding instead to throw up self-contained puzzle boxes; enter a room, figure out how to sneak past or kill the guards, move to the next room. Still enjoyable, but some day a developer really needs to take a risk and build an espionage sandbox.

So it’s an antique, and no amount of polish has cleaned Splinter Cell up for the HD era, but as an antique it ironically provides something different. Game developers have largely forgotten how intelligence and guns can go together in games, and as we look forward to the next Call of Duty, and the other increasingly-linear first person games, a dedicated single player stealth/ spy fantasy is well worth supporting, if only to encourage more of this style.

Avadon publisher, Spiderweb Software, to hit up the iPad with a new game