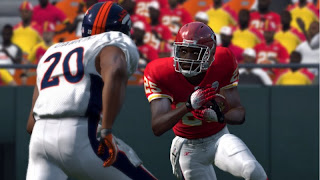 August is always a big time of the year for fans of the American-style version of that wacky game called football. The Madden Football series has even spawned whole ‘holiday’ (not to mention a curse) called Maddenoliday around it. People take off from work, they ditch chores and tasks… It’s kind of a mess. For these masses of followers, the wait for release day can be an excruciating one.

But take heart pigskin fanatics, because EA just ran a Quarterback Sneak and released a little something to tide you over- the Madden 12 demo is now available for your 360 or PS3. As in right now. No, really- log onto the PSN to nab the demo for your Playstation or click here to add it to your download queue on the Xbox 360.

Prepare to experience the thrill of a roster update with a couple new modes.