We’ve been following the development of Runespell: Overture pretty closely here at Digitally Downloaded, and after playing the preview build of the game, it’s safe to say the anticipation is justified. Runespell is one heck of an addictive little experience, and when the game goes live, we recommend everyone get to downloading this one. 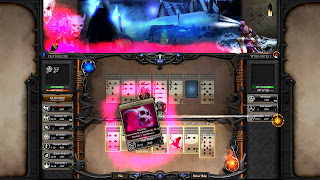 Much like how Puzzle Quest effectively brought together Bejewelled and RPGs, Runespell somehow connects the dots between solitaire, poker and the RPG. The basic idea of the game is this: you’ve got a deck of cards laid out in front of you like you were going to play solitaire. You need to arrange those cards into “poker” hands which allows you to attack your opponent (who is doing the same thing with his own deck of cards). The better the hand, the more damage you do.

There are a couple of catches that complicate that basic idea though. For starters you only get three ‘moves’ per turn, which means that you need to be efficient in building hands. Pairs and three of a kinds just won’t cut it. It’s also possible to steal cards from the opponent’s deck, which introduces another layer of strategy – do you use your turn to stop the opponent from building an especially nasty hand?

And then there’s the magic abilities and allies. Those are activated when you’ve done (or taken) enough damage to fill up your “rage” meter. But using them takes up one of your three turns for that round. The range of abilities that these spells and allies can offer is impressive – from shields to damaging spells of various elements to healing yourself. You can only take a certain number into each battle though, so finding a good balance introduces a nice Magic: the Gathering CCG element to the game.

It’s a surprisingly complex and layered game, is Runespell, and every bit as addictive as the other best games this hybrid genre has thrown up over the years. The story might come across as a bit obscure for some audiences – rather than focus on a traditional fantasy setting, this one takes place in a setting derived from Norse mythology, but the presentation is clean and colourful enough to draw you into the game regardless.

There seems to be plenty by way of side quests and unlockable bonuses to keep people playing for long periods of a time, too. Whether Runespell ends up being as popular as the likes of Puzzle Quest remains to be seen, but trust us on this one – if you like puzzle/ RPG hybrids, you’re going to get right into this game as well.