Now that the 3DS eShop has fully up and operational, the full catalogue of over 200 DSiWare games and applications are available to download and play on Nintendo’s newest console.

For those with 3DSes that skipped on the DSi, that’s a whole lot of stuff to wade through. With that in mind, we’ve listed a few games and applications that are a good place to start. It’s not a ‘best of’ list, but rather a range of pointers for people looking to get the most out of their new console.

Let’s start with the non-gaming stuff. DSiWare didn’t exactly compete with the iPhone or iPad for non-gaming applications, but there are a couple of useful ones on there. So, with that in mind:

Of the clocks and calendars, this is the most interesting of them. Its primary function? Recording your sleeping patterns. This application tracks how long you sleep for, and the time you fall asleep and wake up.

How is this useful? Used over a prolonged period (3-6 months or longer), as the data starts to build up, you can work out the optimal sleep patterns for your lifestyle. It might not sound like a whole lot, but sleeping patterns do have a big impact on our waking hours, and this cheap little app helps keep track of it all. 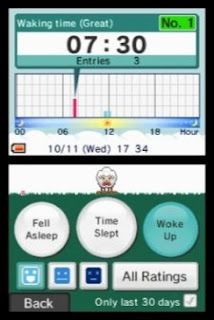 Forget the cheaper, earlier Red, Blue and Green – these bigger notebooks cost a touch more, but have a whole lot more functionality (such as saving to SD card). Given the 3DS doesn’t have a dedicated notebook built in, this serves the purpose admirably. The only downside on the 3DS is the relatively limited battery life and the underlying fact that you’re paying money for something that should have been included as standard.

This is a great little app for people who want to learn a little about art. The touch screen does a remarkable job of recreating feel of a canvas, the lessons are comprehensive but easy to follow for a newcomer, and you can save your work to SD card for printing out or uploading to the Internet (something not present in the retail version of this application).

Just don’t both with Art Academy: Second Semester. There isn’t enough new stuff to justify the price – just a few more lessons, and by that point you might as well go get a proper art book.

This little drawing application isn’t a game as such – it’s merely an application for a Chinese Whispers-style party game. One person draws a picture based on a phrase. The next person writes a phrase based on the picture without knowing the original phrase, and so on.

It’s not the most complex application out there, but for dinner parties and the like, it’s a lot of fun. You won’t be busting this out every day, but it’s good to have on the SD card regardless. 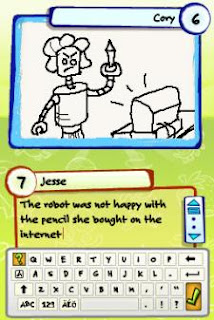 And the really good stuff on DSiWare was obviously the games. There’s plenty of variety to choose from (though puzzlers did enjoy the lion’s share), so here’s a couple of games from each genre to get you started:

Puzzler: Art Style: Kubos (or precipice in the US)

There’s so many good puzzlers on DSiWare, it’s really down to personal taste, but the six Art Style games that Nintendo published on the service are a good place to start. Of those, Kubos is our personal favourite. Classy visuals and a very addictive scoring system means this is a game that you’ll get hours and hours out of. Honorable mention to Art Style: PicoPict, which will give retro Nintendo fans a real kick. 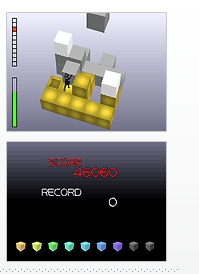 Unfortunately, Australians miss out on this one. For the rest of the world, though, WayForward’s platformer is a real classic. Lots of meat, lots of character and perfectly refined design. WayForward is perhaps the most talented 2D developer still out there, and this game is one of its very best.

This is a fairly simple hoard game. Swarms of enemies come at you from all directions. Using the touch screen to aim in all directions, it’s a game of escalation – the enemies get tougher as your guns get more powerful. Eventually they’ll get you, and you’ll have a high score to enjoy.

There’s four game modes that each feel different to play, and this is one of those games that is better on the 3DS – the circle pad for movement works far better than a D-Pad.

This parlor-style board game is great fun single player, and even more so in multiplayer (which can be done with a single copy of the game).

The basic idea? Guess what colour icons your opponent has hidden, which not letting on what you have. Out-bluffing your opponents is a basic thrill, but an endless one.

Of course, with over 200 games and applications, there’s plenty more we can recommend, so why not jump over to our forums to chat about DSiWare? In the meantime, enjoy these bits of software. They might not be in 3D, but they’re still plenty of fun!