Wrecking Crew is quite an oddity. Despite the appearance of video game icon Mario, the game went relatively unnoticed while Donkey Kong and Super Mario Bros thrived. Up until this point, Mario had almost always starred in action games, while Wrecking Crew largely revolves around the puzzle genre. The release of several other renowned titles at the time certainly did not do any favors for the game’s recognition either. Fortunately, the game still holds up 25 years and many consoles later.
Released back when the NES was still in its infancy, Wrecking Crew succeeds in executing its concept particularly well. The player is thrown into the role of Mario, an Italian deconstruction worker. The goal of the game is to demolish every bit of wreckage in the level from ladders and bombs to generic debris, all by utilizing your one and only piece of equipment—the mallet. Assortments of enemies waltz throughout the stage and will perform various actions, most notably stalking Mario around in an attempt to hit him (which triggers an automatic loss). There are also doors that the enemies can walk through, which is a huge benefit to Mario. They appear in the background and can no longer attack him.

You must be dreadfully cautious with your destruction of the rubble, because if you destroy a ladder (the only method of reaching the upper level), you’ll be unable to break every obstacle due to inability to access the rubble in higher locations. On each floor, there is a crossover segment where you can head to the opposite side by simply going off one side of the screen. When all lives are lost your game is over. The gameplay is reasonably straightforward but challenging, so it offers a rationale to continue progressing through the game. One vexing issue you will often encounter is that if you get stuck where no enemies can get you, you’re stuck eternally (unless you reset the game data).

Essentially, there are three main enemies to be found in Wrecking Crew. One is a wrench-type enemy who simply walks around and is moderately unproblematic to avoid. Second, there is a “friendly” enemy who is basically a rival foreman. While he does not injure Mario himself, he hides in the background and destroys objects with his very own hammer, such as ladders, disallowing you to climb up and complete the level. The third is an eggplant-looking figure that, while sharing similar movement patterns to the wrenches, is significantly more intelligent. There are also fireballs that occasionally fly through the building, which can be difficult to dodge. 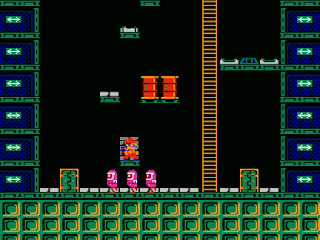 With 100 unique levels to progress through, Wrecking Crew doesn’t disappoint in terms of content. There is even a level builder which, unlike the original NES version, enables you to save custom stages.
The controls for Wrecking Crew are exceedingly basic, as expected from being on a console with four buttons and a directional pad. You can easily move around Mario or Luigi by moving the D-Pad left or right. Pressing the 1 or 2 button allows you to whip out your hammer and use it for a couple functions, but mainly for breaking the obstacles in each level.  Easy controls only benefit the game, making it simple to pick up and play.
The sound effects are remarkably apt, taking into consideration how bizarre and unfitting the sound effects from this epoch could be. The hammer smashes, bomb explosions, and the sound of Mario falling to the ground are all fitting with their own situations. While the sounds can be impressive, the music is regrettably the polar opposite. The entire game is based around a single track which, while catchy at first, quickly becomes maddening. If you’re making sure to put the music on mute every time you turn on the game, you know the aural experience is sub-par.

All in all, Wrecking Crew is a solid addition to the Virtual Console’s selection. Its arcade-style gameplay and simplicity will leave you crawling back for more fascinating level designs. While there are better ways to spend 500 Wii Points and the game can be frustrating, it may warrant a purchase if you’re a puzzle fanatic.