Shadows of the Damned is Suda 51’s most complete work to date. Previous games have featured flashes of brilliance (usually around concept and storytelling) amongst some painful execution (usually the gameplay).

From what I played at the EA preview event, Shadows of the Damned still hasn’t got that pesky gameplay thing down, but it’s closer, and the vision and creativity in this game are utterly unmatched. 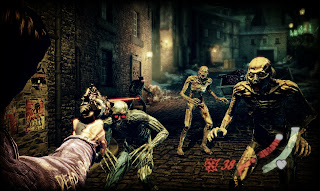 It really is a descent into hell, for one thing. Previous games with a similar theme, such as Dante’s Inferno, were tame by comparison. Shadows of the Damned becomes progressively more hellish as you move on. By the time you get to the end… Suda’s pushed the limits of good taste and the censors to the limit.

It’s a good thing. By pushing the boundaries, Shadows of the Damned puts you in a position where you have to survive – both the urge to play on, and the game itself. It’s not that the game isn’t welcoming – difficult aiming mechanics aside, this is Suda’s easiest game to play to date. It’s that the game is a real struggle against overwhelming odds, and just like the protagonist, it’s a trial on the resolve. Bosses are especially intimidating – in true Suda style, they are big, epic battles and one and all genuine highlights to the games.
The game is let down in some places by a case of ‘nice idea – poor execution.’ Light is crucial to survival, and this means you’ll need to keep lanterns lit, and fireworks lighting up the night sky. This doesn’t always work – the darkness returns too quickly sometimes, and the constant running back to set up more fireworks is a distracting pull away from figuring out what to do next.
At other times the dark/ light interplay opens up some amazing innovative gameplay. The fact that some puzzles need darkness gives you pause to think. Another time a boss character (not unlike the stalker-invulnerable Jason Vorhees) runs off with your light supply, dousing it in the process. Relight it, and the Jason-like will chase you around for a bit before repeating the process. This fight/ flight interplay is one of the tense, exciting moments I’ve ever experienced in a game. 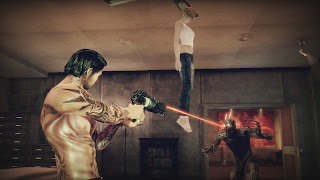 Shadows of the Damned is a linear rollercoaster, but it’s the finest example of grindhouse, and the most interesting representation of hell in a videogame to date. Suda might not produce the best quality videogames out there, but love them or hate them, they are games that remain in the memory, and with that in mind, this is his most stand out production to date.
Share this