Yesterday at an EA preview event I was able to get some substantial play time with Alice Madness Returns. As a huge fan of the original game, I can’t say I’m disappointed with what the sequel is offering at all. 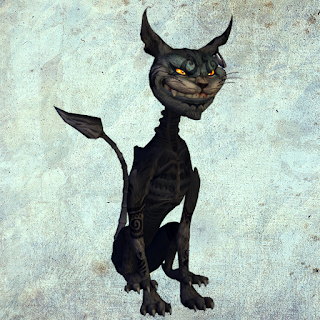 It starts off with a bang. This game is all about recovering memories, and plot kicks off with you following an emanciated cat through some winding, and stunningly-realised streets in the real world. American McGee and his team have done a stunning job of building a fairy tale world where everything looks and feels just slightly off. Characters are detailed and well animated, but all look like they’ve come directly from a Grimm fairytale visualisation.

The art director on the project claims his main inspiration was the pre-cg fantasy films, the likes of the excellent Labyrinth

or The Neverending Story

, and it works in this game. It truly is a visual wonder.
The gameplay itself walks a fine line between generic platforming and reasonably visceral combat. There’s plenty of double jumping and associated puzzles to contend with, and the fighting itself is set up like a puzzle – each enemy has its own unique blindspots that need to be exploited for an easy win.
In a concession to modern gaming, failing (falling down a pit, for instance) respawns you near by, and there’s a generous checkpoint system in place. Experienced platformer fans will fly through this – the degree of difficulty is quite low and certainly not a patch on the likes of Mario Sunshine – but during that fly through, the game is a genuine blast. 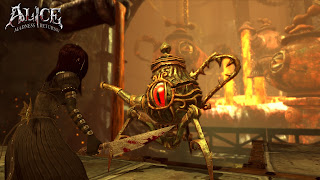 See, where everyone but Nintendo has struggled with 3D platformers to get the little things tweaked to perfection, Alice has succeeded. The camera is amongst the best I’ve ever seen for the genre, and the game worlds remain vibrant and original throughout the experience. Not once when I was playing did I think to myself ‘seen this before’ – this Alice is wholly original and while it’s a very different flight of fantasy to a Mario game (there is plenty of gore, for one thing), it’s no less creative.
So yes, Mario and Nintendo finally have a genuine competitor in the platforming space. Alice Madness Returns is going to be a must have.
Please note the Amazon Affiliates links above provide Digitally Downloaded with revenue. Which helps us keep this site going. We thank you for your support.
Share this

Keen to follow the development of King Arthur 2? Read the developer dairy