Sydney independent developer, Nnooo, has on its hands one of the most interesting WiiWare releases in ages on its hands with escapeVektor. 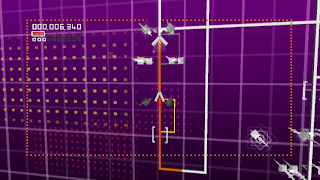 We’ve got a while to wait before we’ll get to play it, but it’s looking really well refined already. It’s something of a cross between retro classics Qix and Pacman – across a whole bunch of levels you’ll be tasked with “colouring” a series of wires that your avatar is attached to by moving over them. Colour in the entire field and you’ll be able to exit the level and move on. Naturally there’s a number of curve balls thrown to make the task more difficult. There are three enemies to deal with, of varying difficulties and unique personalities. You’ll also need to navigate through, or around, gates that can have a variety of nasty effects.

The game makes use of an overworld map, not unlike the recent New Super Mario Brothers games. Some levels offer a number of different possible exits, and open up alternative routes through the levels. There’s a number of different power ups to unlock as well – such as the ability to boost speed, as well as a “bomb” effect that will clear the level of enemies temporarily. 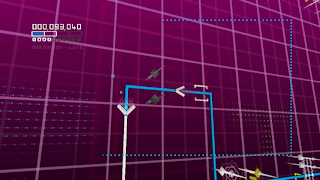 It controls like a dream, as well. There’s no gimmicky motion control; holding the Wiimote on its side gives you all the buttons you’ll need. Movement is smooth and responsive, and the game’s pacing is just right – action enough to require quick reflexes, but not so fast as to take away from the level of precision you’ll want to navigate through the levels.

The game starts easily enough, but some of the later levels are genuinely challenging. All up you’re looking at around four hours of gameplay – a decent length for a game Nnooo is angling to cost 500 points. 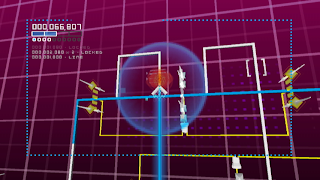 Really, the only disappointment  we have at this stage is a lack of online functions, or even leaderboards (especially appropriate for arcade style games like this). Nnooo’s creative director, Nic Watt, told us that online integration with Wiiware was more difficult than it’s worth, but it worked so nicely with studio’s previous download release, Pop, we will miss it here.

Should escapeVektor be successful, Nnooo has plans for additional ‘chapters’ to be released. We hope it is, because even now, months before release this is a highly refined, appealing little game. Nnooo hasn’t released a game since Pop, choosing instead to focus on the highly successful MyLife Collected series of DSiWare applications, so it will be good to sink the teeth into something a little more gamey from this talented studio.

Digitally Downloaded is looking for staff!