This is one of the biggest updates we’ve ever seen. Chillingo has updated its so-so Etolis: Arena with a massive list of new features that might well change up the entire game. 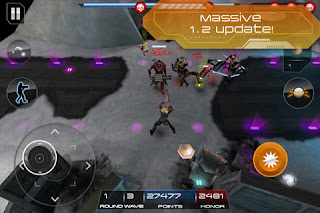 So what’s new in version 1.2? According to iTunes, the list is:

– 4 new characters (Gangster, Rebel Elite, Pirate, and Scientist) each with their on special ability (Rage +35 per cent damage, constant speed boost, destroyer drone, laser belt)
– A whole new game mode called Champion. Defend fleeing civilians and a anti aircraft gun defending their shuttle!
– Added a Chaingun Turret and multiple firing laser turret
– Added 19 new upgrades (health, speed, damage, etc) for the character, weapons, and turrets
– Added health bars to all enemies, civilians, and turrets
– Added an enemy targeting indicator
– Added option for Rock music and an additional epic soundtrack
– Tuned several character animations
– Firing point blank now hits targets
– Created an Easy difficulty level and removed Seasoned
– Fixed issue where some animations not animating when offscreen
– Shrunk the City and Chamber maps for faster paced gameplay
– AI improvements and speed smoothing
– Auto-aim smoothing and better line of sight targeting
– Retina Display graphics now applied to the whole application
– Multiple performance enhancements
– After unlocking secret level data, its is now presented to you immediately
– Game hints added
– Removed point requirements for all gametypes and lowered them for maps and special abilities
– Removed dynamic lights option
– Added descriptions to all weapons and upgrades
– Camera improvements
– And a mountain of other graphical tweaks, bug fixes, and code enhancements
It’s an impressive new feature list, to say the least. We weren’t a huge fan of the initial release of the game, but this is enough to have us checking it out again.
Share this