Square Enix has hit on a brilliant system for doing demos, and come up with something that people will not only pay for, but actually want to keep them on the system after they buy the full game. I’m talking about Dissidia Duodecim Prologus – one of the smartest stunts I’ve seen the Japanese publishing giant pull to date.

Let’s get something straight from the outset – Prologus is a demo. For $5 you’re getting a small section of what you’ll find in the full game, with a limited number of playable characters, stages, and stories. 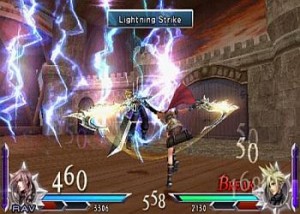 That’s where the comparisons between this paid demo and the stuff you download, play once, then delete and forget about are over.
For the first half hour or so after booting up the “demo,” I was thoroughly unimpressed with the game. I hadn’t played the previous Final Fantasy fan service mash up, and I was struggling to enjoy either control method on offer. “RPG mode” seemed to me to be more of a “sit back and watch the computer fight for you” event, and “Action” was more about flying around in random circles than any actual fighting.
Two hours in, I was getting a much better hang of “Action,” and started enjoying myself. By the fourth hour, I realised that I was indeed going to download the full version of the game when it was released.
The time there is important – no regular demo has four hours of gameplay involved. In fact, you’re lucky to get 10 minutes out of a typical demo. I can think of plenty of examples of demos that have managed to, thanks to their brevity, not tell me a thing about how the full version of the game will play. For a very recent example – Marvel Pinball barely gives you long enough to see the table, let alone get an idea on how the physics and layouts work.
That same quantity of content with Dissidia would have me delete the game and not bother paying for the full thing, because those first few minutes really were utterly confounding and uninspiring. It was only because there is a lot of content in the game that Square Enix was able to turn my initial impressions around completely.
Because the demo did take a reasonable length of effort to put together, then, it makes sense that Square Enix needed to charge for it. Which is where the beauty of the publisher’s strategy comes in – the demo doubles as some pretty decent DLC.
It shows an absolute confidence in the product. While people might be upset to pay for a demo, Square Enix gambled on people getting a lot of play out of that demo, and then being inspired even further to buy the full game, at which point that time spent in the demo translates into some very real rewards in the main event.
As such it’s more than just a teaser (which may or may not be properly representative of the overall game). Prologus is an encouragement to invest in the full game – it’s not just a free sample, it’s an introductory offer. And this is how we’d like to see demos work in the future.
Share this