The most charming game that has ever featured Nobunaga Oda.

May the great vocaloids above bless D3 Publisher for eternity. Without this company and its love of publishing B-grade aesthetics, we wouldn’t have the likes of Onechanbara, School Girl/Zombie Hunter and Earth Defence Force and the games industry would be a much darker place. I mean this quite sincerely, too. The gleeful embrace of B-horror and exploitation that comes out of this publisher might never have the production values of a God of War, but if you love the golden era of entertaining trash cinema from the 70s through 90s, then these games have significant value in tapping into that. It’s been a while between sips of this particular type of game, and I was worried that D3 was letting it all go, but the team has come back in style to produce Samurai Maiden. This thing is pure joy.

If the schoolgirl-with-a-katana wasn’t a dead giveaway, this game has a wonderfully ludicrous premise. Tsumugi Tamaori is a typical girl in the modern world, doing typical things at a typical school with her typical friends, until one day she was somehow sucked into a portal and deposited in the Sengoku era, where she meets with Nobunaga Oda and three ninja girls. This group of medieval warriors promptly decide that Tsumugi is actually a prophesied God-like being that will defeat a mighty demon of darkness, and so her quest into Yomi (i.e. the Japanese underworld) begins.

It’s not as horrible as it sounds, though. I mean, sure, there are undead creatures and monsters everywhere, but the three ninja girls are there to help young Tsumugi out. And also flirt with her. And kiss her. And pose for kawaii photos after a successful quest. It might be a trip into hell, but Samurai Maiden makes it clear that you can have fun while doing it. That’s certainly a new take on a Dante’s Inferno-like journey and I’m all there for it. Tsumugi is cute. It’s nice seeing her make new friends. 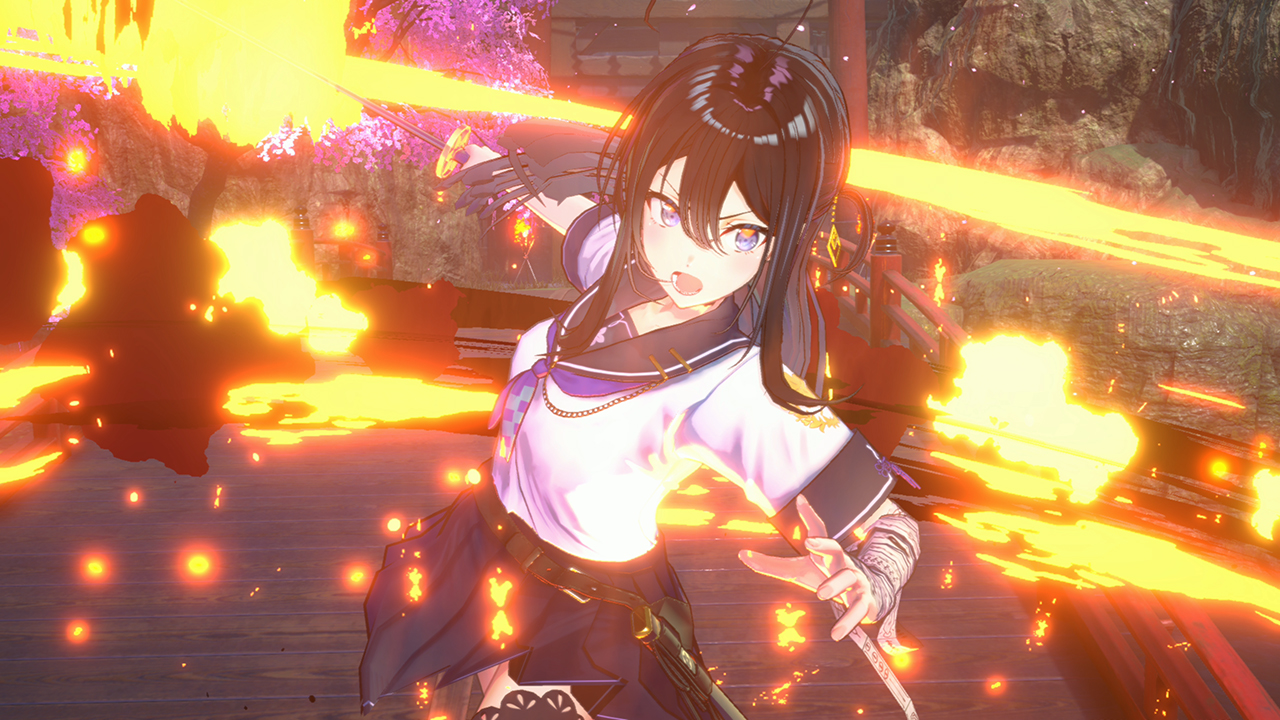 Anyhow, the point is that Samurai Maiden was never going to take itself seriously, and it doesn’t let us down on that. It’s a silly, entertaining, flirty and fanservicey action game that’s more interested in telling its own ridiculous kind of story than throwing lengthy gameplay at players. It doesn’t play badly, and we’ll get to that soon, but Samurai Maiden spends significantly more time with visual novel-style cut scenes, and within that, only about 10 per cent is actually focused on pushing a narrative forward. Most of the rest of it is a ridiculously over-the-top male gazey take on what a group of girls must talk about and obviously get up to when there aren’t guys around. I’m going to age myself with this reference, but you may remember an exchange between Chandler and Monica in Friends:

Chandler: You know, when guys hang out they don’t just drink beer and hammer up dry wall?

Monica: When girls hang out we don’t have pillow fights in our underwear.

Samurai Maiden is the crux of that joke. It’s a stupid fantasy that guys would imagine girls would do on an adventure together. To be clear, though, it’s not meant to be titillating, sexy or erotic. Rather, it’s deliberately dumb nonsense, and it is great fun. Case-in-point: most action games like Devil May Cry or Bayonetta will have a skill tree where you unlock stuff by spending resources on it. Pay X, get move Y. Yay. Samurai Maiden instead makes you spend time adventuring with a ninja girl so she can level up her “affection level”, and then watch a cut scene where, for one of the earliest (and tamest) examples, she discovers photos of Tsumugi and her “real-world” school friends playfully groping one another and decides she wants in on that action. Then the special move is unlocked.

Such an upgrade system is innovation, really. I look forward to Sony’s next big blockbuster cribbing this approach to upgrades. 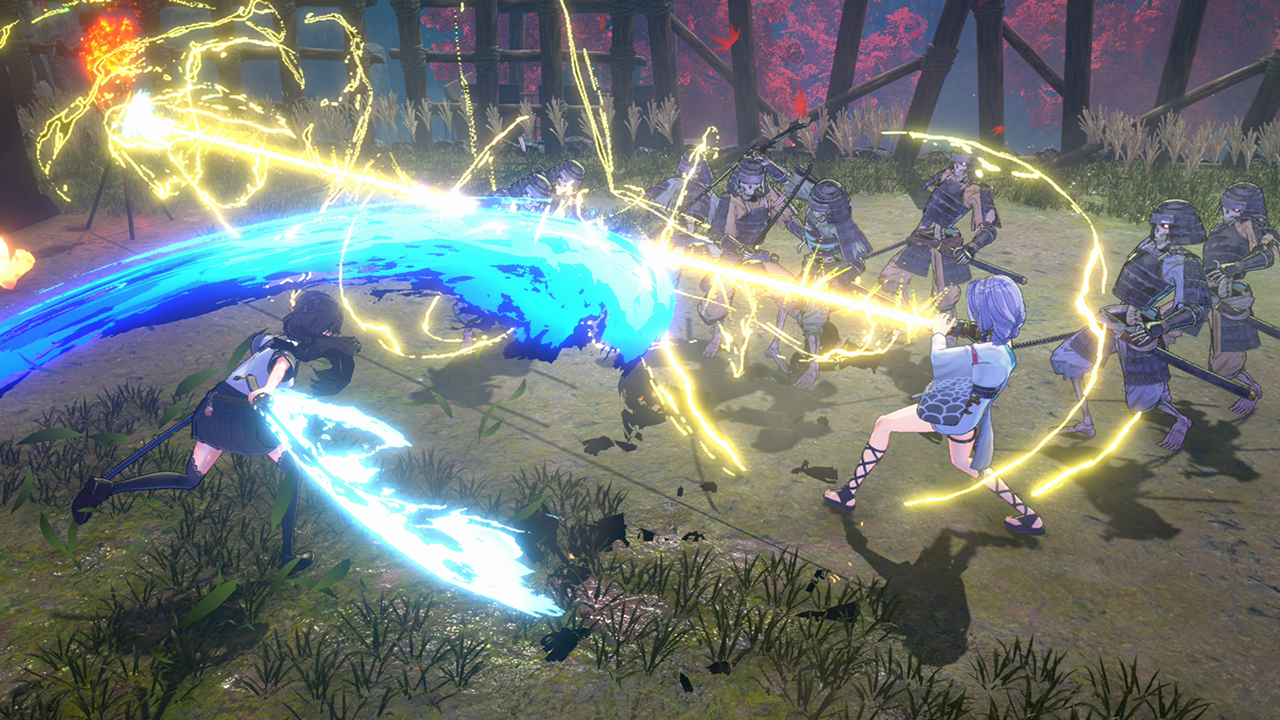 Jokes aside, Samurai Maiden’s unlock system and the depth of Tsumugi’s capabilities in battle are genuinely impressive. At first, when there’s a limited range of combos and attacks, the game feels clunky and limited, and it’s really not a good early impression. A few hours later, though, the slicing and dicing morph into something that’s genuinely enjoyable. You’ve got a wide range of different combos to play with, all flashy in a different way, and it does feel great to string them together. Another great feature is the ally companion that you take into battle with you (the other ninja girls). You can have one of those fighting by your side at any time (but you can swap between them at will), and each girl has completely different abilities both in and out of combat. One girl has a zipline that you can use to traverse large gaps in the terrain and an electric attack that can kill a large number of enemies in a line. Another has the ability to throw bombs and set down healing pots, and in combat will stun enemies for you.

In the later levels and on greater difficulties, the action becomes surprisingly manic and explosive. You’ll be weaving in and out of a throng of enemies, trying to target whatever leader happens to be present, while also trying to avoid being hit by their attacks, which generally have a large range. At the same time, you’ll be juggling through your allies and activating their special abilities, all the while avoiding environmental threats. It’s a lot and it is frequently very exciting. Just the one thing holds it back. The enemy design and AI is the biggest problem with Samurai Maiden. It’s too rote and simple, and you’ll never feel like you get to unleash all the toys you’ve been given via that lovely unlock system. Nonetheless, it’s a big step forward for this kind of B-aesthetic “genre”, and you’ll be able to enjoy Samurai Maiden for its combat, rather than the stuff around it.

It’s a reasonably good-looking game, too, and I don’t just mean the anime legs! Levels are surprisingly expansive in scope at times, and can take up to ten minutes to run through. While you’re on that journey backgrounds have some really nice details to them. Hordes of reasonably detailed enemies fill up on screen without any particularly grievous performance hits – even on Switch. Meanwhile, the hero character designs are as good as you’d expect for a game that really wants you spending a lot of time staring at cute girls. 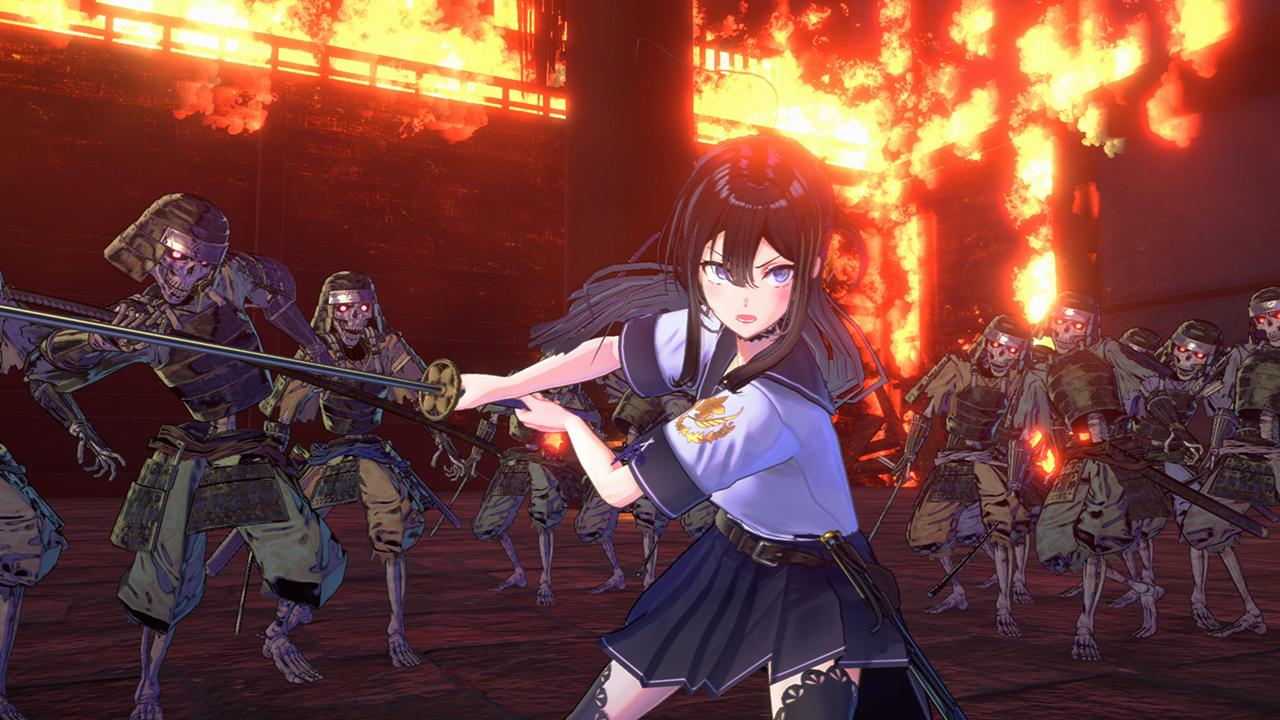 Naturally, given the nature of the game, there has been a particular and disproportional effort put into making sure Tsumugi’s skirt flies around with every jump and roll, and that it tears strategically as she takes damage (i.e. to show more skin). For people that are here specifically for the fan service it is there, but with that said, it’s also actually milder than I was expecting going in. The flashing is real blink-and-you’ll-miss-it stuff, and while some of the cut scenes involve flirtatious dialogue, girls kissing and whatnot, it rarely tips over from playful to becoming raunchy. The likes of Senran Kagura, Dead or Alive or D3’s own School Girl/Zombie Hunter are all far heavier on the visual fan service than this one. One final sign that the developers didn’t want you coming away from this with the sense that it’s a pure perv-a-thon is some weirdly specific “censorship” in the photo mode. Pause the game with Tsumugi in a jump pose and skirt floating in the breeze and you’ll see everything that you would expect to. However, drop into photo mode and everything under the skirts gets blanked out. If that’s not specifically there as a modesty feature, it at least suggests that the developers don’t want people spanning social media with screenshots that will earn the game a certain reputation.

I think that’s a good thing. For me, personally, fan service is at its most entertaining when it’s playful rather than lecherous. Go too far and you end up feeling less like it’s a bit of light and breezy humour – something fun – and more like a genuine effort to turn the player on. Stuff like Honey Select is better suited for that particular experience. With D3 Publisher’s work, and anything else that is trying to be a playful B-grad homage, I just want the bright-and-cheerful.

Musings over fan service aside, Samurai Maiden is wildly entertaining B-grade fun. Like many of D3 Publisher’s other most notable titles, it rolls with its trashiness and embraces B-grade aesthetics and tone in totality. It doesn’t take itself seriously (at all), and doesn’t aspire to be anything more than a genre piece, made for people that probably already knew if this was for them from the first batch of screenshots. The fact it actually plays nicely to go with its fun theme is the icing on the cake. These kinds of games are becoming less and less common, for reasons that are best left to opinion pieces elsewhere. The point is, we need to enjoy stuff like Samurai Maiden when we get the opportunity to, because when they’re done as well as this, they’re a riot, and it would be tragic to see these kinds of games disappear.