I’m obsessed with the paranormal. The older I get, the more interested I am in it. It started as a mortality thing, but has expanded past that into sheer curiousity. I’ll read what I can, watch what I can, listen to what I can. I’m very open to what others (possibly even the majority) would say is impossible. So if someone were to toss, say, a game about dating cryptids my way – you can imagine how I’d react. I believe my exact response was something along the lines of “OMG YES PLEASE!” And that’s how I ended up playing Raptor Boyfriend: A High School Romance, a visual novel about dating dinosaurs/cryptids that was recently ported to consoles by eastasiasoft. I’m not going to lie, though, I already had my eye on following the announcement of its imminent console launch.

Stella has just moved from a city to the small town of Ladle, in Northern Ontario. It’s a place where supernatural beings live side by side with humans. On Stella’s first day at her new school, she meets three potential suitors: Robert the raptor, Day the fae, and Taylor the sasquatch. Taylor’s name is a bit less poetic than the other two; they should’ve gone with another alliterative name such as Benny the bigfoot or something. Each suitor has a distinct personality. Robert is a popular skater boy, Day is more of a cerebral loner, and Taylor just gets more and more mysterious as time passes. The characters are each relatable in one way or another. Even the supernatural ones.

The entire narrative is comprised of Stella’s memories as she tells her stories to her doctor, AKA her teddy bear. It’s a cute concept. She’s attempting to figure herself out, trying on different personalities like funny, flirty, or cool. She fails miserably at each. Stella is intensely afraid of just about everything, but failure seems to be number one on that list. She doesn’t want to let others down. She doesn’t want to let herself down. It’s very relatable. The relatability is actually what really draws me into the game. I feel seen. Since the game is named after him, I fully intended to date Robert in my first playthrough… but I was inexplicably drawn to Taylor the sasquatch. That probably says a lot about me, but I wonder what. The high school flirting nostalgia gets stronger as the story progresses.

There is subtle and sarcastic humour scattered throughout the story. These traits make it incredibly endearing as well as funny. The best line of the game comes from Day: “never go inside a cave that speaks.” By the holidays, I’m finding myself deeply attached to these characters. When they’re sad, I’m sad. When they’re scared, I’m scared. There’s even a whole side storyline about an urban legends regarding a serial killer that does its dirty work on random Friday the 13ths for a hundred years. I’d complain that isn’t plausible (funny, I know) but neither is dating a dinosaur… so…

Related reading: for another visual novel about cryptids, check out my review for Mothmen 1966.

I can’t not talk about the face the scenario is completely unbelievable. I don’t mean the cryptids thing… I just don’t believe they could live freely in town without ever being spotted by outsiders and word of their existence spreading. Despite being in the title, the raptor doesn’t really fit with the cryptid idea of the other two suitors. It’s not supernatural or paranormal, it’s just historical. (This is touched upon at one point but it still nags at me.) There’s an entire conversation about why cryptids are drawn to the area, and it all lines up with what I’d expect. The writers seem to know what they’re talking about, at least on a surface level.

Ladle’s residents, especially the supernatural ones, worry about the highway that will be built through the town because it will bring more people to the remote area. It’s worth noting that the (fictional) town is located in (the very real) Northern Ontario; anyone from Ontario understands how believable this is as our current premiere is literally obsessed with building new highways. For a fictional game about supernatural beings, it’s actually quite realistic in surprising ways! I wonder how drawn I’d feel to the game if I didn’t relate to it geographically. The Canadian-ness and Ontario-ness is definitely part of its charm. Another example of this is when Stella and Day are drinking for the first time: Day brings clam juice as a possible mixer. How Canadian of her. I’d imagine it’s how Australians must feel playing Necrobarista. 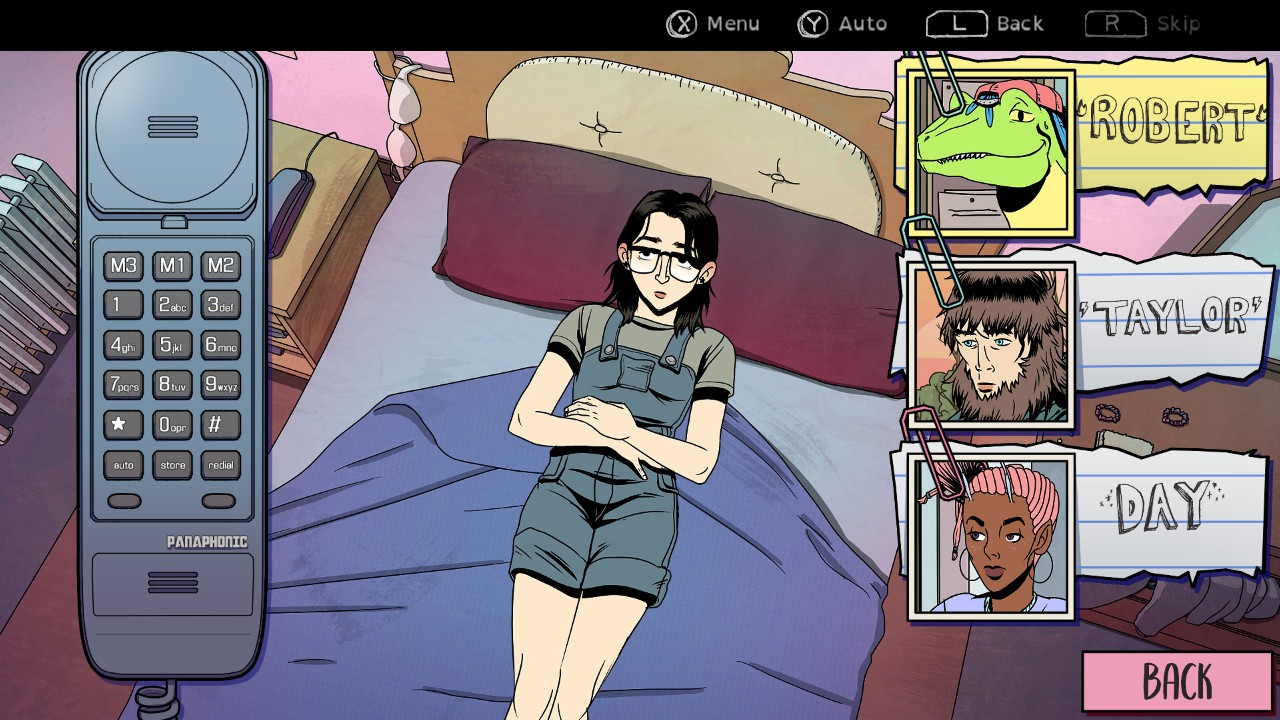 Raptor Boyfriend sits firmly in the visual novel genre, with minimal point-and-click elements. It’s a lot of reading dialogue and making decisions, which is exactly what I wanted it to be. In terms of the gameplay, that’s about it. Generally, it doesn’t reinvent the wheel – but it also doesn’t have to. It’s narrative elements are strong enough that it doesn’t need to be super innovative when it comes to gameplay.

The only complaint I have about the game is that the second half of the school year feels rushed. Several chapters lead up to the holidays, one encompasses the holidays, then only two are dedicated to post-holidays. I would have liked that second half of the year to be elaborated on a little bit more. There are definitely reasons for that (I’m not about to spoil anything!) but I feel like I didn’t continue to get to know Stella during this time frame.

Born of Bread, the bread-themed RPG, is coming soon to PC!