What’s the result of combining cryptids, retro graphics, and pulp fiction? Why, Mothmen 1966 of course! It is the first title in what is already being called the Pixel Pulp series, by LCB Game Studio. I feel a bit bad for those I’m close with, as I’ve been rambling about this game since it was revealed. My favourite era of game graphics combined with my favourite cryptid? I was all in right away. Now, I’m not terribly familiar with pulp fiction on a first-hand basis, I just know of it. It’s basically considered “low-quality literature,” which generally eschews higher-level thinking for more visceral thrills and sheer entertainment. Common genres of stories include mystery, science fiction, and horror/occult; all three of these are evident in Mothmen 1966.

Before I write about the game itself, I’d like to take a brief (I promise!) look at the history of the Mothman. It was first spotted near Point Pleasant, West Virginia in November 1966 – so the date in the game’s title isn’t arbitrary in the slightest. It was first spotted by two young couples, who described it as being a large flying man with ten-foot wings and red glowing eyes; in the local paper, it was described as a “man-sized bird… creature… something.” And so Mothman was born, and the legends surrounding him grew over the years. It’s often said that the Mothman either caused or predicted the Silver Bridge collapse in Point Pleasant toward the end on 1967. There have been books, films, television specials and episodes, all dedicated to the Mothman. If you’re interested in learning more, I highly recommend reading John Keel’s book The Mothman Prophecies or watching the second season of Hellier (but watch the first, too, because it’s an incredibly thoughtful look at the paranormal and it’s also completely free).

I swear, that was as brief as I could be! So what does this all have to do with Mothmen 1966? In all honesty, other than the form of the Mothman, not a whole lot. The developers take the idea of the Mothman and give it an original spin into a brand-new narrative that was a bit unexpected, but not in a bad way. Just in the way where it’s something I know a good amount about, but now there’s also this fictional take on something real (ish). It’s set in the same area, around the time of the first recorded sighting.

Mothmen 1966 is told from three perspectives: Holt’s, Lee’s, and Victoria’s. There are also a couple of supporting characters that show up along the way, including a strange writer named Lou. Holt owns a gas station in the boonies, while Lee and Victoria are college sweethearts who seem more resentful of each other than in love. All paths cross on the night of a meteor shower when strange things start happening around Holt’s gas station. There are strange creatures and strange sounds and strange lights.

Over the course of a couple of hours (depending on your reading speed and puzzle-solving ability), the characters uncover what is truly happening with these very angry Mothmen (that’s right, there’s not just one). The game falls solidly into the category of visual novel, sometimes to its detriment. Most of it involved reading, clicking, reading, clicking. Sometimes there’s a puzzle. The puzzles are not the most simple to navigate in visual novel format, as it’s not like there is a cursor or highlight around objects to select them. The puzzles themselves, though, are solid. There is only a few of them, and all are solvable with a little bit of trial and error and a dash of logic. They range from moving store stock to escaping wild coyotes to protecting the characters from the Mothmen.

There is another puzzle in the game, but players don’t need to win to keep playing. Called Impossible Solitaire, it’s said to be… well, impossible. It involves moving cards to a discard pile, but also having to guess if every card to be drawn will be red or black. Luckily, the cards are always in the exact same position when you start the game over again, so maybe someday my time will come and the impossible will be possible! I have some issues with this part of Mothmen 1966. First, it’s just awkward to play cards under visual novel control constraints. Chose to move the cursor left or right. Hit a button. Repeat until you get the card you want. Choose to move the card. Rinse and repeat. It’s a bit tedious, especially considering I am obsessed with actually beating the minigame. My other problem is that the game is accessible from the main menu, but if you quit or fail it doesn’t bring you back to the menu, it continues the narrative from where the card game takes place. 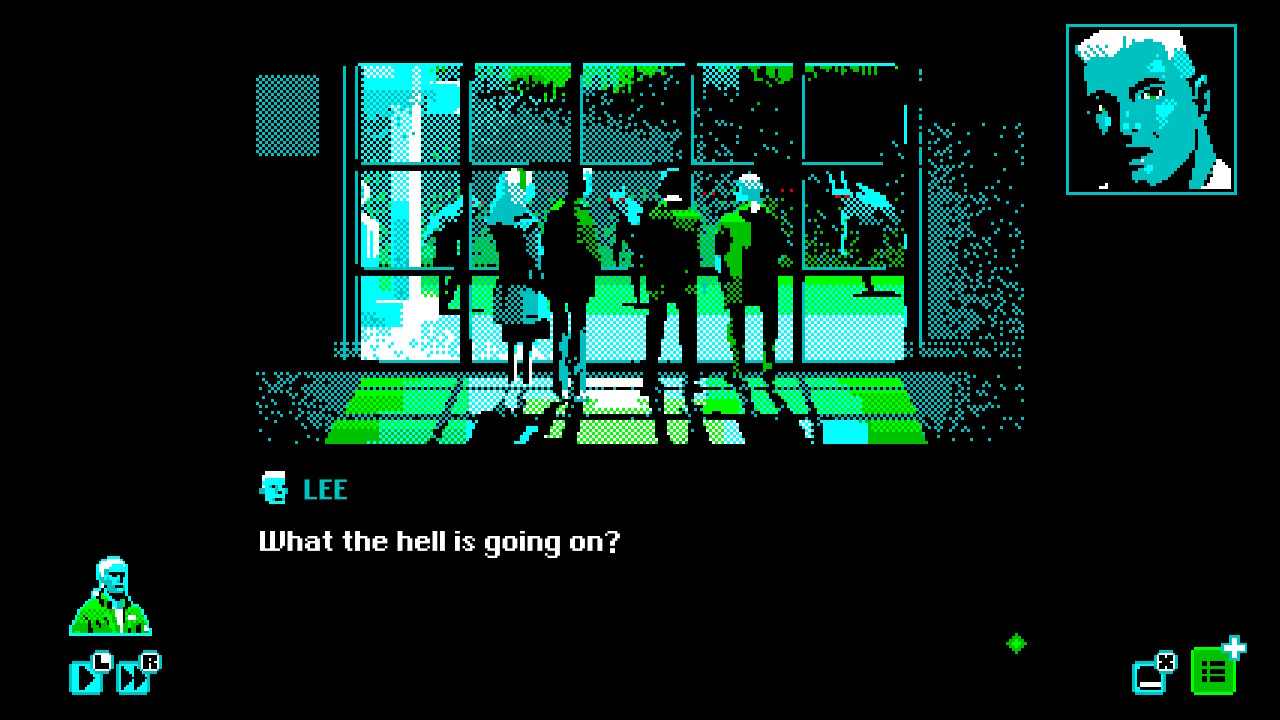 When I refer to retro graphics, I mean retro. It’s not just pixel art, there’s also a very limited colour palette, more akin to the glorious 1-bit days of early PC gaming. Despite these choices, the characters are easily identifiable from each other, each with a very specific look. There is one puzzle where the moving parts are a bit difficult to tell apart from each other, but if you pay really close attention it’s not too bad. The music is good in the background, but it’s the sound effects that really come to the forefront. The Mothmen make an awful racket, I was playing in handheld mode yet it felt like the entire room was filled with an enormous amount of bugs. At one point I thought it was my ceiling fan about to fall on me, but alas, just some great sound effects!

I have one beef with Mothmen 1966: it makes Mothmen the villain! The poor Mothman is always seen as something scary and foreboding, and this game continues that trend. Is the concept of the Mothman scary? Sure, anything unknown is scary. Especially if they’re actually an alien living among us using the name Indrid Cold… but that’s another rabbit hole that I’m not about to go down today.

Mothmen 1966 is a solid, albeit short (though there’s nothing wrong with that) game that successfully combines pulp fiction and video games. The next game in the series, set at a summer camp, is already planned; and I’m already counting the days until I can get my hands on it too.