Netflix’s flirtation with games has, so far, been hit-and-miss (but mostly miss). The company’s rolled out a subscription game platform on mobile that has been so undercooked that many people don’t even realise they have access to it. Furthermore, the less said about many of the games that Netflix has actually published, the better. However, a week ago the company launched Triviaverse and this… this has potential.

Rather than be a game that you download and play on something, Triviaverse is instead a “TV show” that you interact with using your remote control (on supported smart TV devices, or the touchscreen on your phone etc). This immediately gives it a vibe similar to the old DVD games that you used to be able to buy in film stores. I remember having a Who Wants To Be A Millionaire DVD game that was incredibly popular back in the day (when Who Wants To Be A Millionaire was also popular… yes, that was once a thing).

The aesthetic of the game, meanwhile, is even more nostalgic. A pair of glowing eyes welcomes you to the game and introduces each chapter. This reminded me of the aesthetic of stuff like Atmosfear/Nightmare, a VHS tape-enhanced board game that featured a sinister entity explaining the game to you as you played. As a child of the 90’s and then an avid enthusiast of the short-lived effort to make interactive games delivered over TV, I simply love the presentation of Triviaverse. The game itself is incredibly simple. One or two people can play, and there are three “rounds”, each one minute long. In each round, you answer trivia questions as quickly as you can, ideally building up a lot of points by getting several answers correct in a row. Answering a question simply involves choosing from up to four different answers that pop up on screen. After the first minute you move immediately to the second, and then the third, with the questions getting more difficult in each round.

At the end of the three rounds your total score is tallied and, based on the number of points you earn, you’re placed on a scoreboard. The game also keeps track of basic statistics, such as the number of times you’ve played, and your best and worst categories. After that, you can simply start another game, or go do something else. With a maximum length of three minutes, Triviaverse is an ideal microbreak experience.

Of course, what makes a trivia game truly great is the quality of the questions, and Triviaverse does generally get this right. Unlike many of the trivia games that come out of America, the questions are not too American-specific, and it seems like the quiz team was aware that this was for a global audience. Because the emphasis is on quick responses, the questions are not overly difficult – even in that supposedly “hard” third round – but also because it’s a time attack it is way too easy to mash in the wrong answer before thinking things through clearly. 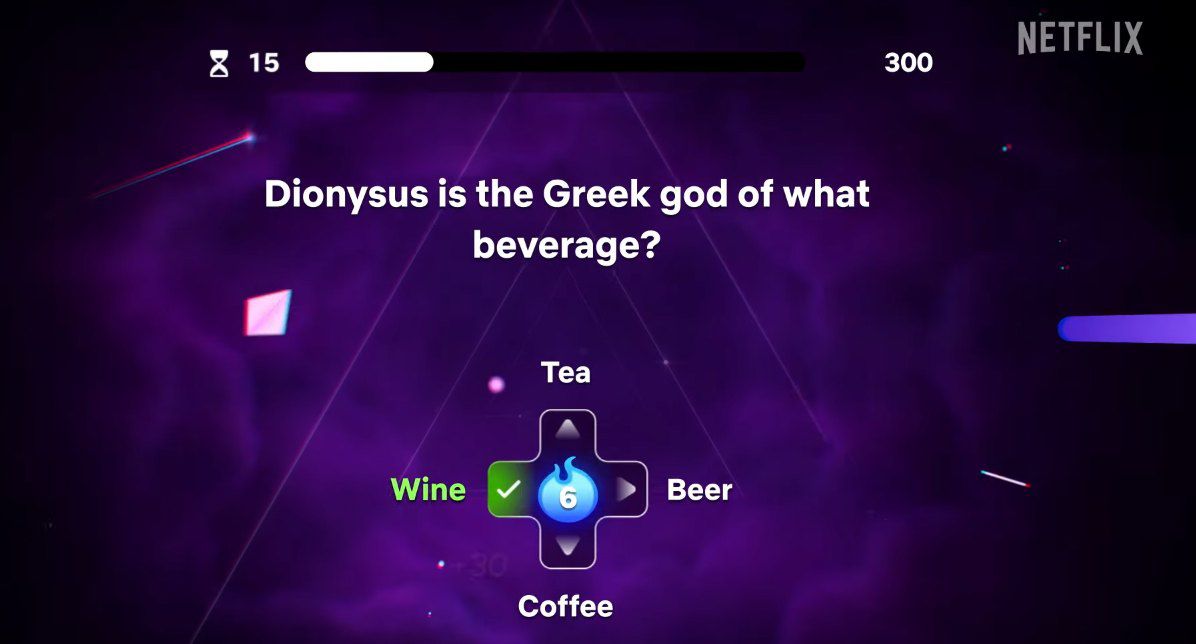 The only area that’s really unbalanced is the categories – according to Triviaverse my strongest category (i.e. the category I get stuff right in most often) is “Films and TV”, but given that the vast bulk of questions there are about Netflix shows, Game of Thrones and Marvel/DC films, I would hope I got such elementary stuff right. I’ve yet to come across questions about Jean-Luc Godard or Stanley Kubick, i.e. serious questions for serious fans of the subject. Meanwhile, my weakest section is currently science or something because in that category the questions are more tailored towards a working, rather than casual understanding (also STEM isn’t my strong suit).

Given that Triviaverse is being delivered at a TV show, I don’t know how practical it would be, but if Netflix quiz team can keep the game updated with new questions and try and implement things like online leaderboards, they may well be on to something with long-term value. Trivia is fundamentally enjoyable, both as a challenge for yourself and a socially competitive activity, and by putting as such easy access for people that have a TV or mobile device, Netflix has the makings of something special.

Back in 2019 on Netflix a South Korean thriller series…

Netflix has shared the debut teaser and key image for…