This is a weird kind of sisters fantasy...

Here’s a free tip for developers and publishers: “Souls” means something in video gaming now. We may or may not like it, but people see that combination of letters and think something very specific. Soulstice is not actually one of these games (blessedly, given that this year has already been saturated by soulslikes). Rather, it is both surprisingly and appealingly a Devil May Cry or Bayonetta-like, and while it’s not up to the standards of those games, it is excellent in its own right.

The grim, apocalyptic setting is incredible, and immediately draws you into its world. Soulstice takes place in a world that has had a rift torn in the sky, and a plague of demons has taken over the city. It’s a knights-and-wizards medieval setting, too, with an appealingly grim atmosphere. Every so often you even come across the ghosts of the past, which fill you in on the events that led to the cataclysm, and it’s a dark tale indeed. The presentation is only let down slightly (but only very slightly) by the voice acting, which really struggles to nail the sincere tone that the script calls for. I don’t necessarily hold this against the voice talent or direction, because every developer that isn’t FromSoftware struggles with this. It’s just a bit of an immersion breaker to have such a vivid world, paired with the superb soundtrack that Soulstice has, undermined slightly with vocal performances that don’t quite get there.

Of course, you’re not going to be thinking about that once enemies arrive on screen. As you would expect from a game inspired by Devil May Cry, Soulstice has a demanding combat system. It’s fast, fluid, and very busy. I just don’t know if borrowing from Ikaruga was necessarily the innovation this genre needed. From around the second chapter onwards, you gain the ability to create two different auras (red and blue, though I can’t remember what the lore names for them are), and when those auras are turned on, you can hit enemies that are colour-coded accordingly (just like Ikaruga’s core gameplay trick). The catch is, of course, that combat throws a mix of enemies that rely on you switching between these auras. It gets difficult to work through these enemies systematically, given that you’ll also be dancing around the battlefield AND making sure you don’t overcook things because if you leave the aura on for too long then it conks out for a while. If that happens you’ll be in a very disadvantaged position and unable to attack the enemies until the cooldown resets.

It’s hard to track it all. Not only do enemies come in common, ranged, muscle and armoured varieties (each requiring different tactics to defeat), you’re also likely to have enemies off-screen that you need to be aware of (lest their ranged attacks come in by surprise), and then you’ve got to keep an eye on the meter in the corner of the screen that warns you that you’re overusing the auras. It’s just as well that your protagonist is nimble on the battlefield, but this game’s got a combat system that is very much tuned toward the hardcore. Even on the easiest difficulty setting.

There’s nothing inherently wrong with any of that. Devil May Cry itself is rightfully celebrated for it. The Ikaruga-inspired dynamic might get a bit hectic for some but I’m sure a niche will find it appealing. One thing lets Soulstice down badly, though, is the block and counter system. There is so little feedback about whether you’re doing these things right, or even the timing that you need to use, and while the tutorial does a half-hearted effort to explain things at the very start of the game, you’re not going to realise just how clumsy it is until a fair bit later on down the track when you realise that the tutorials weren’t great at onboarding you to a mechanic that is fiddly and lacking in visual and mechanical feedback. In the end, I relied on the dodge button more than the various reflect abilities, and was able to make my way through the game, though I suspect I wasn’t playing it the way the developer intended. 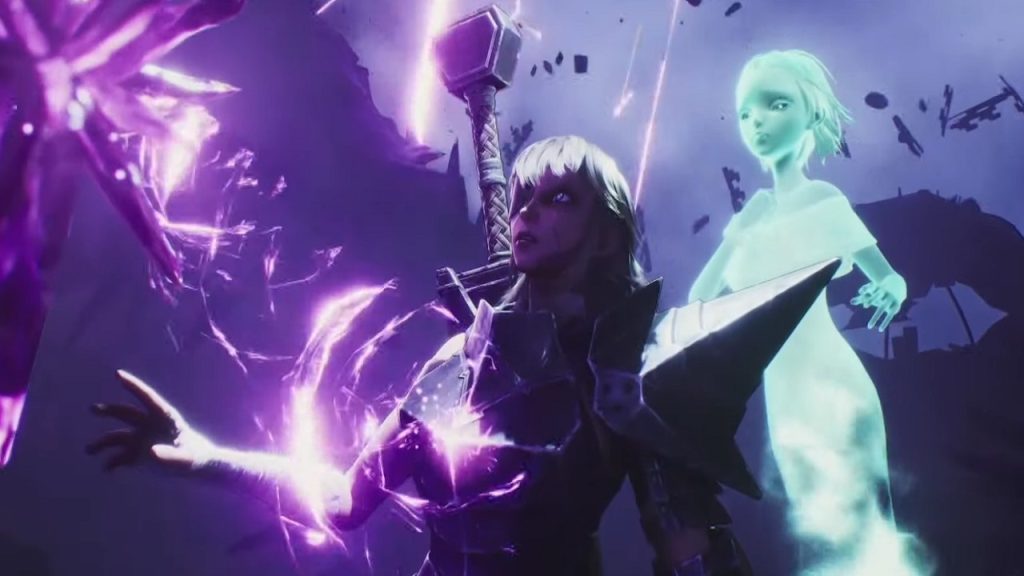 Soulstice does the Devil May Cry/Bayonetta thing of grading you on your performance in each battle on the way to a final grade at the end of each chapter. The game’s a little at odds with itself here, as it tracks the time you take to get to the end of a level (in other words, encourages speedruns), but also has some neat hidden treasures and secret pathways that encourage you to slow down and take your time. You could argue that this is to encourage replay value, and that’s fine. Speedrunning is a fine reason for a second play. But if that’s the case why make people feel like they’re playing poorly for exploring around the first time? Tying scores to the speed of completion is a bit of a misfire for me.

In fact, I would argue that a score rating undersells Soulstice’s combat system, because this thing is at its best when it simply lets you play. Thanks to a broad range of weapons, as well as the combo system that you have available thanks to your bound ghost-sister ally, anyone who works their way through Soulstice using the same attacks is doing the combat system a disservice. Take the time to learn the flow of combat and it’s a reward all by itself.

Soulstice is an excellent first effort in what must be an enormously difficult genre. Just imagine the work that must go into crafting such big, challenging action set pieces and leave the player feeling satisfied rather than infuriated. Soulstice isn’t perfect, but I hope the development team does stick at this, because they’re on to something special.