If only I could bowl so perfectly IRL...

Ten-Pin Bowling is one of my favourite activities. Few things are more entertaining than getting a group of people together and hitting the lanes. Especially when there’s party music and alcohol involved. Bowling is a lot of fun – a truly good night out! – when combined with a bar, and perhaps even some karaoke after a couple of games have been put down.

Bowling itself makes for some great, quick party action in the world of video games, too. Wii Sports (and now Nintendo Switch Sports) will forever be a classic because of the bowling minigame. Done well, it’s just the right combination of pure pick-up-and-play accessibility and an accurate recreation of the sport to help make the decision of what to play on family game night that little bit easier.

But here’s the thing. I don’t think the vast majority of people, even those that enjoy ten-pin bowling, want the video game adaptations to go beyond that. What FarSight Studios have done with PBA Pro Bowling 2023 is overkill. There are over 150 balls to earn and upgrade, as though they’re a garage full of cars in a Gran Turismo title. There is a career mode that simulates qualifying, match play, head-to-head and stepladder formats of competition. There are even a handful of real-world players that have been licensed into the game, as though they mean the equivalent of having Rafael Nadal in a tennis title, or Cristiano Ronaldo in a football game. 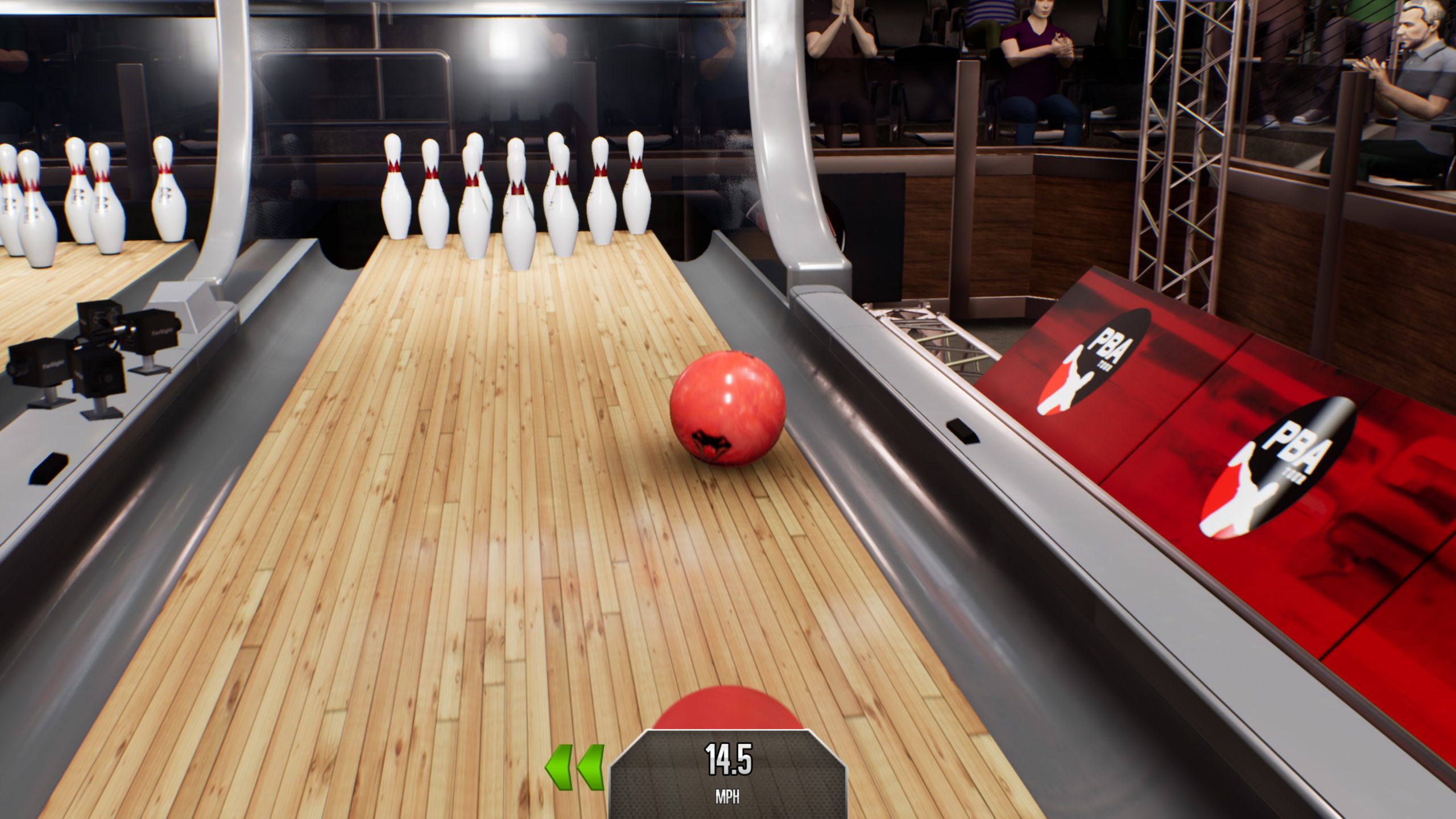 Who knows? Perhaps on some corner of Twitter, there are heated debates over whether Peter Weber is GOAT, or who would win between Kris Prather and Chris Via. Perhaps there are a bunch of TikTok tutorial videos on how to bowl like Darren Tang. This is all possible. I’m not deep enough in the world of professional ten-pin bowling to know if there is a celebrity tier of athlete, or that there is any demand for a dry simulation of the sport that builds substantially on what is offered in things like Wii Sports. I suspect that there isn’t, though, and PBA Pro Bowling occupies a niche so small the purpose of the game itself is questionable.

The game gets the basics of bowling right, as you would hope it would. You can of course control the rotation, spin, and speed of the ball, just like the pros do. When I bowl in real life, I have little skill for curving the ball. I just hurl it down and try and break speed records. It is, of course, not the best way to bowl and I don’t exactly score well in the real-world game, so I appreciate the ability to hit the right curve and build those 200+ scores here.

Perhaps it’s a little too easy, though. After a game or two, you’re going to know the precise spot to place your bowler, and the right angle and amount of spin to place on the ball to all but guarantee nine or 10 pins down with every ball. Your score at the end will depend a little on the fractions within the physics system, which will determine just how many strikes you get versus spares, but the point is that within half an hour, how you play PBA Pro Bowling 2023 will become entirely rote. Every single ball you throw down the lane will be done exactly the same way, every single time. It doesn’t matter whether you’re playing career, local multiplayer, or online multiplayer. You’ve going to be rolling the same ball down the same line, with the same spin on it, over and over and over again. If that wasn’t draining enough, because this is a serious simulation of the sport, there also aren’t exactly many entertaining bells and whistles to make the whole experience more entertaining. Unlike real-world bowling, there isn’t even a beer waiting for you after you knock down your pins. 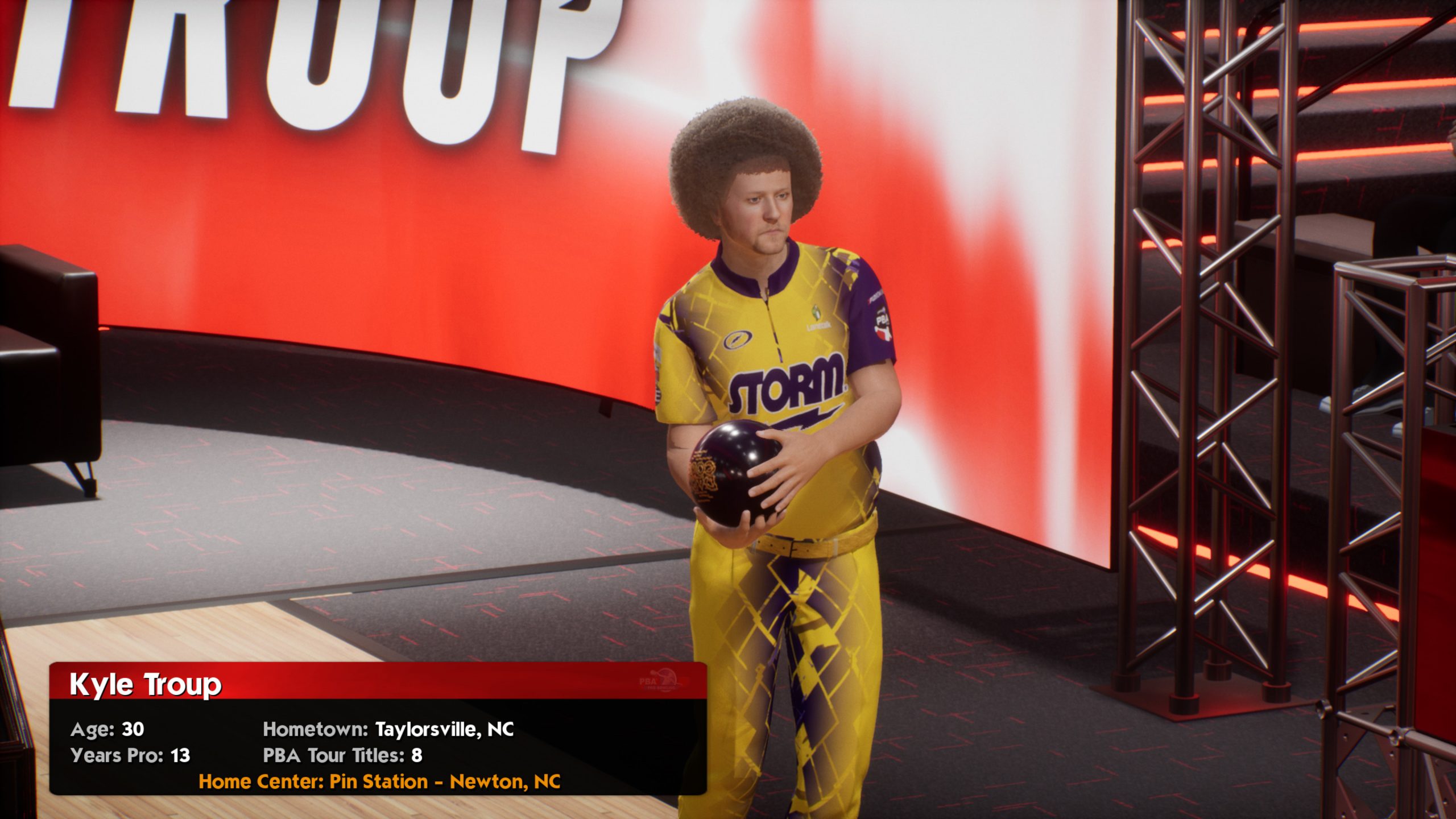 This is the fundamental problem with ten-pin bowling. It’s a sport that tests your ability to achieve sheer precision and accuracy. Unlike tennis, football, cricket or basketball there’s very little variation in the flow of a game. Unlike pool, poker or pinball there aren’t the infinitely complex permutations or randomness to ensure that every game plays out differently. Unlike curling, chess or go there’s no direct competition to force you to be tactical. In bowling, your aim aim to do the same thing over, and over, and over again. And because this is a video game, with digital inputs, there just isn’t the same difficulty in achieving that, as real bowlers face. Real bowlers need to account for the vagaries of flexing muscles and the difficulty that humans have in trying to be machine-like in their accuracy. In a video game, it’s just a matter of pointing arrows in the right directions and pressing buttons at the right time.

This isn’t really the developer’s fault. There are, simply, some sports that are impossible to translate into a video game. My main real-world sport these days is ballroom dancing, and that’s certainly an example of this. There is no way to adequately capture the experience of the lead and follow, and the full complex movements of the human body, as ballroom dancing demands. The same goes for gymnastics, figure skating, diving, karate kata, ballet, or any other sport where precise control over the human body is the theme of the sport. Ten-pin bowling is like these sports. The qualities that make a player great at ten-bowling simply do not translate, meaningfully, to the inputs available in games.

Ten-pin bowling works as a little minigame, aimed at a social and party environment. It’s a simple, easy-to-grasp sport, and the consistency with the rules makes it ideal for pick-up-and-play fun. However, PBA Bowling 2023 aims to be more than that. This wants to be a serious simulation of a sport where the skill involved cannot be adequately abstracted into button presses. As a result, while PBA Bowling 2023 is a perfectly well-made game that is free of bugs and glitches (sadly a rarity among niche sports titles), it is also an intensely boring, shallow game. You’re better off sticking to the light and frivolous take in Wii Sports.