Nintendo Switch Sports would have been an excellent launch title pack-in game, much like Wii Sports was back on that console 16 years ago. It’s a well-made minigame compilation that highlights the strength of the motion controllers and system dynamics. However, the Switch already has a lot of those kinds of experiences, and there have been some baffling decisions made in development here that make Nintendo Switch Sports much less of an “all ages and skill levels” experience than its predecessor, so ultimately I struggle to see the value in it.

In Nintendo Switch Sports there are six sports to choose between: Tennis, Bowling, Badminton, Volleyball, Football, and Chambara (foam swords). Each is controlled by motion controllers, and can be played with just the one JoyCon, meaning that you and a buddy can get a quick game of bowling in anywhere in the world. That’s the kind of experience that would have really sold the social portability of the Switch from day one.

Of the six sports, Tennis and Bowling – the two that were present on Wii Sports 16 years ago – remain the cream of the crop. Both distil their respective sports down to a simple, highly familiar physical motion, and anyone who has ever swung a tennis racket or thrown a ball (so, just about everyone) will have an intuitive understanding of how to play those games. Badminton doesn’t really belong in the collection as it is barely different to Tennis, but because it is like Tennis, it too gets a pass. It works and it’s good fun. 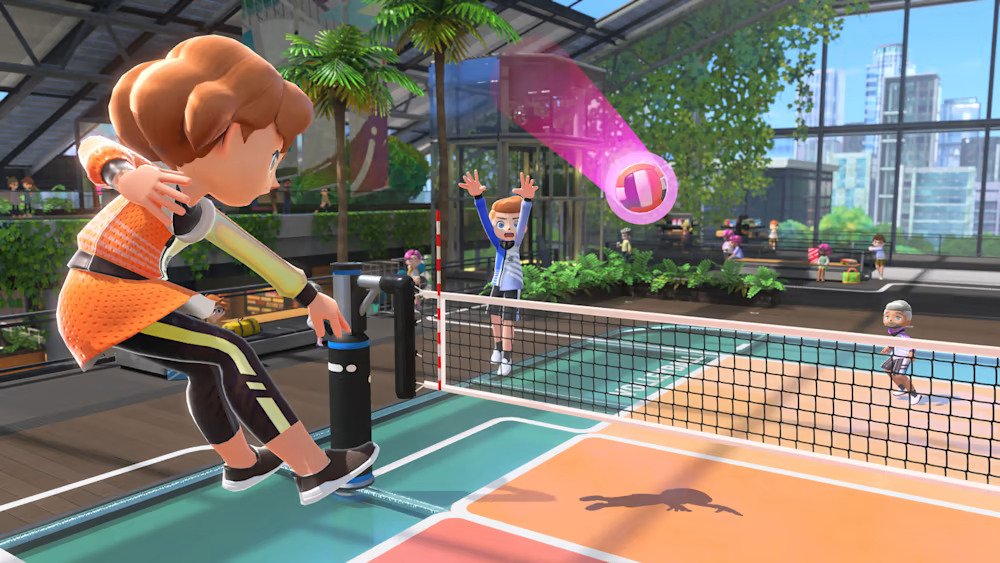 It’s the other three where I have problems. Chambara’s basic issue is that, as good as the Switch’s motion controls are, it’s still finicky to try and swing it around 360 degrees like a sword, and the game itself is too demanding on rules, precision and placement to be instantly accessible. It’s the least egregious of the three, but it still fails to capture the instant appeal of Bowling or Tennis.

Volleyball is, firstly, not Volleyball since that’s a sport for six people on each side, and this one features two. That would be the right number for Beach Volleyball, but this takes place inside, so immediately it’s a factually incorrect take on the sport. I’m being pedantic in raising that, but all Nintendo needed to do is locate this court onto a beach setting and that problem would have been solved. Of a bigger problem, though, is the fact that Volleyball is a sport of feints, precision, angles and tricks, and instead of capturing anything that makes Volleyball such a great sport, Nintendo Switch Sports tries to distil the entire sport down to three motions, none of which approximate what you do in the actual sport. Tennis’s racquet swing and Bowling’s rolling movement are spot on. Volleyball’s set and block actions, in particular, miss the mechanics of their respective movements entirely. It’s really telling that Dead or Alive Xtreme has a more accurate take on the movement and technique of Beach Volleyball, and as we all know, that game is really not about the sport.

And then there’s Football, which plays out like a slow-paced Rocket League. Tactically and in terms of complexity, this is the best of the six, and what online community Nintendo Switch Sports gets will be largely concentrated into playing this one, I suspect. It is also best played with two JoyCons and is just far too complex for something that’s trying to capture the “for absolutely everyone” appeal of the original Wii Sports. Parents and grandparents who would enjoy a game of Wii Bowling are going to take one look at this and just go “nope.” 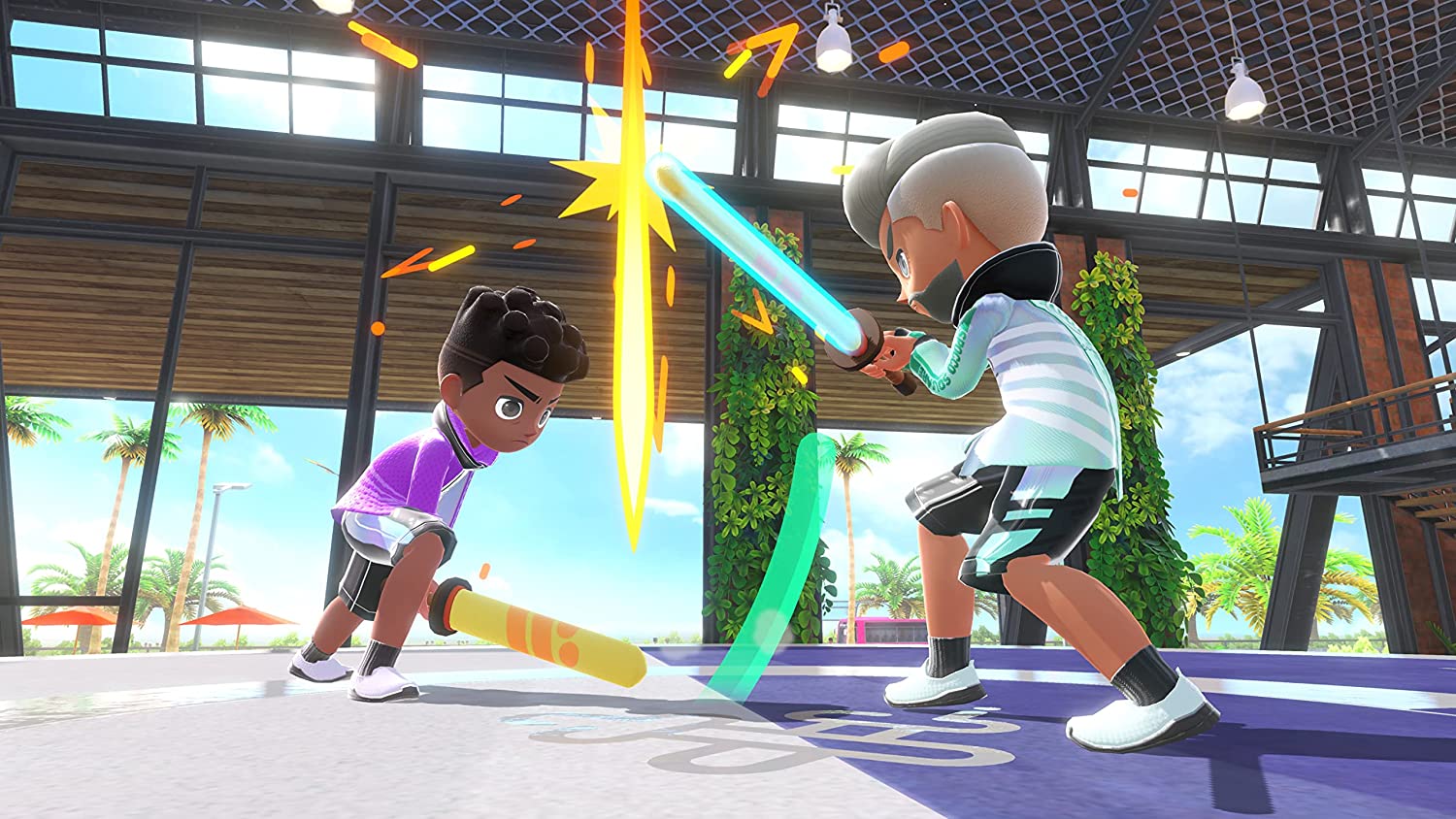 So three of the six sports largely miss the mark, in terms of what makes Wii Sports the kind of title that deserved a sequel in the first place. What is intensely strange to me is that the other games in Wii Sports – particularly Golf and Baseball – would have been excellent on Switch too. Just like Bowling and Tennis, and unlike Volleyball, the quality of those sports can be distilled down to actions where players don’t need to move around much, so their omission is very strange. Golf is coming via an update later in the year (free DLC, no less), but since I can’t play it, I can’t very well include it in this review either. For now, it’s missing, and it is missed.

I also have an issue with the shift in focus to online play, which Nintendo is pushing as the major way to play (the biggest menu option is to play online). Now, as a disclaimer, I can’t speak to the quality of the online game since it’s not live as I write this review. However, it wouldn’t really matter if the game plays perfectly online, with no lag, and has some excellent ranking and progression (mostly costumes, it seems) systems. I will give the online a spin and write some thoughts on it separately, but for the purposes of this review, my problem with the online focus is the very fact that it is the focus. By which I mean that the “Wii Sports” property really should be focused on offline play. I’m sure that Nintendo Switch Sports will end up with some kind of online community, and as I mentioned earlier, the Rocket League-like quality of Football in particular should attract some competitive players. But Wii Sports was always designed as a social experience, and when you dig down into the enduring appeal of it, that’s the core reason that it did so well. It’s something you played with friends and family over beers (and/or juice boxes), and winning a game of Bowling just isn’t the same when you can only taunt a screen and the person you beat on the other side of the planet won’t even hear you. I mean, who goes Ten Pin Bowling by themselves, or plays tennis against a ball machine for fun? These sports are meant to be physically social, and the online play simply doesn’t capture that.

Finally, I remember all the stories of people who were actually inspired to get fit playing Wii Sports. In fact, I remember people actually getting fit just by playing Wii Sports itself back in the day. It was a genuinely noble quality of the game, since anything that encourages people to improve their fitness is a good thing. Nintendo has pushed on to do some incredible things with lifestyle and its consoles, and the Switch has boxercise apps and Ring Fit Adventure that really work on this level. Nintendo Switch Sports does come across as a lesser thing here, as it tests a lower range of motions than the boxing apps, and lacks the resistance of Ring Fit Adventure’s ring. There is one little minigame that you can play in the Football minigame, where you strap a JoyCon to your leg and kick penalty goals, but that’s only fun for two or three goes, and then the lack of variety and challenge will discourage you from playing it much more. 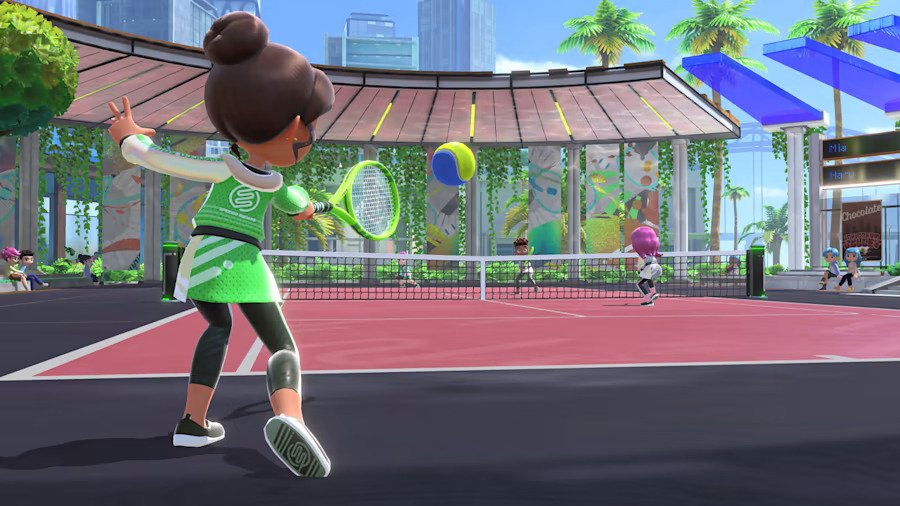 Nintendo Switch Sports is well-made, with the gorgeous, “lifestyle” aesthetics that have always been characteristic of this series. The motion controls work well, and in local multiplayer it is good fun, as Wii Sports was 16 years ago. However, it lacks the zeitgeist quality that Wii Sports had, and I just can’t see this resonating to anywhere near the same degree. I don’t think there’s any scenario where Nintendo could recapture the magic that made Wii Sports such a mass culture phenomenon, and as well as Nintendo Switch Sports is made, it doesn’t get there.

Here’s the first look at Legend of Mana: The Teardrop Crystal

Vampire: The Masquerade – Bloodhunt can bugger off back into the shadows