Have you ever wanted to date a volcano?

Dating is hard. First you have to meet someone you’re at least vaguely attracted to in some sense. Then there’s the awkward first date, the one where neither party knows whether or not they should kiss if it goes well so they just make weird eyes at each other before parting. There’s the getting to know each other phase, where you become incredibly self-conscious because what if you say something they don’t like? Once you’re past all that, though, it gets easier. But video games aren’t often about the easy times in life, and Kaichu – A Kaiju Dating Sim is no different. It’s about the difficult parts of dating, while feeling like the whole world is watching. Although in this case… it is.

Kaichu – A Kaiju Dating Sim introduces the world of monster dating through the lens of a television news broadcast. Two reporters behind the news desk follow Gigachu, an adorable pinky-purple Godzilla-like creature, as they try to find true love. I use “they” here, but many pronouns are available; I considered Fae/Faer but went with Chu/Chu in the end. Anyway, these two reporters seem to be emotionally invested in Gigachu’s love story, as their reporting isn’t exactly unbiased (not that it matters). They’ll report on each date, and eventually start reporting on the forces trying to break up any couple being created. In the game, this is the military… it’s taken an active role in trying to destroy true love between monsters, probably because they get a little smashy.

Unfortunately, the first thing I encountered with the game was frustration. None of the controls make sense to me, and I’m not sure if that’s because I’m used to western control conventions or if the developers just didn’t quite get it right. I started with the keyboard. Now, you’d think clicking on something or hitting enter would select it, but nope: you have to hit X to make something happen! It took me an embarrassing amount of time to figure this out considering it’s written right on the screen, but for some reason I got confused regardless. So I tried the controller, which doesn’t use B (to me, the universal “back out” or “cancel” button) at all but instead uses Y. So going from a Nintendo Switch (the only console I use these days) to an Xbox Series controller on PC was already a big shift since the buttons are all switched around, but all non-standard button uses and I was constantly pushing the wrong button no matter how long I played for.

Now that I’ve gotten my single irk out of the way, I’m going to move on to all the good stuff. The game starts with a map of the world, which isn’t wholly precise but it gets the job done. From there, choose which kaiju you want Gigachu to date. Each date also begins with the map. This time, you choose where you want to go on a date. There’s a good smattering of landmarks available, including the Sydney Opera House, the Great Wall of China, and the Golden Gate Bridge.

Once the (hopeful) lovers are together at the location, the date begins. Whoever Gigachu is dating will ask questions with multiple-choice answers. They will either love, like, or hate the answer Gigachu (you) gives. If they love it, the pair will do a lot of damage to the landmark. This part makes me laugh every time, mostly because it’s oddly adorable considering the destruction. If the date likes the answer, the pair will do a little damage. If they hate the answer, nothing happens to the landmark. If the date is successful, it will end with a great big smooch. If the date is so-so, Gigachu will blow a kiss. If it fails… well, I picture it as a cold chill coming between the two, but that’s mostly in my head. It does seem chilly though!

I don’t want to spoil all the dateable characters, but I need to say that I adore Tephra. She’s an oceanic volcano. She likes fire and consistency, and hates paparazzi and uncertainty. Each dateable character has their own persona, and they vary greatly. I like Tephra because I identify with her the most, but there are little bits of me in everyone so I never feel bored or detached while playing. She’s mysterious yet very set on what she wants, and sometimes the answers I thought she would agree with were the ones she hated the most. Questions sometimes repeat themselves, and it was easy enough to remember what she hated to fix it the next time around. 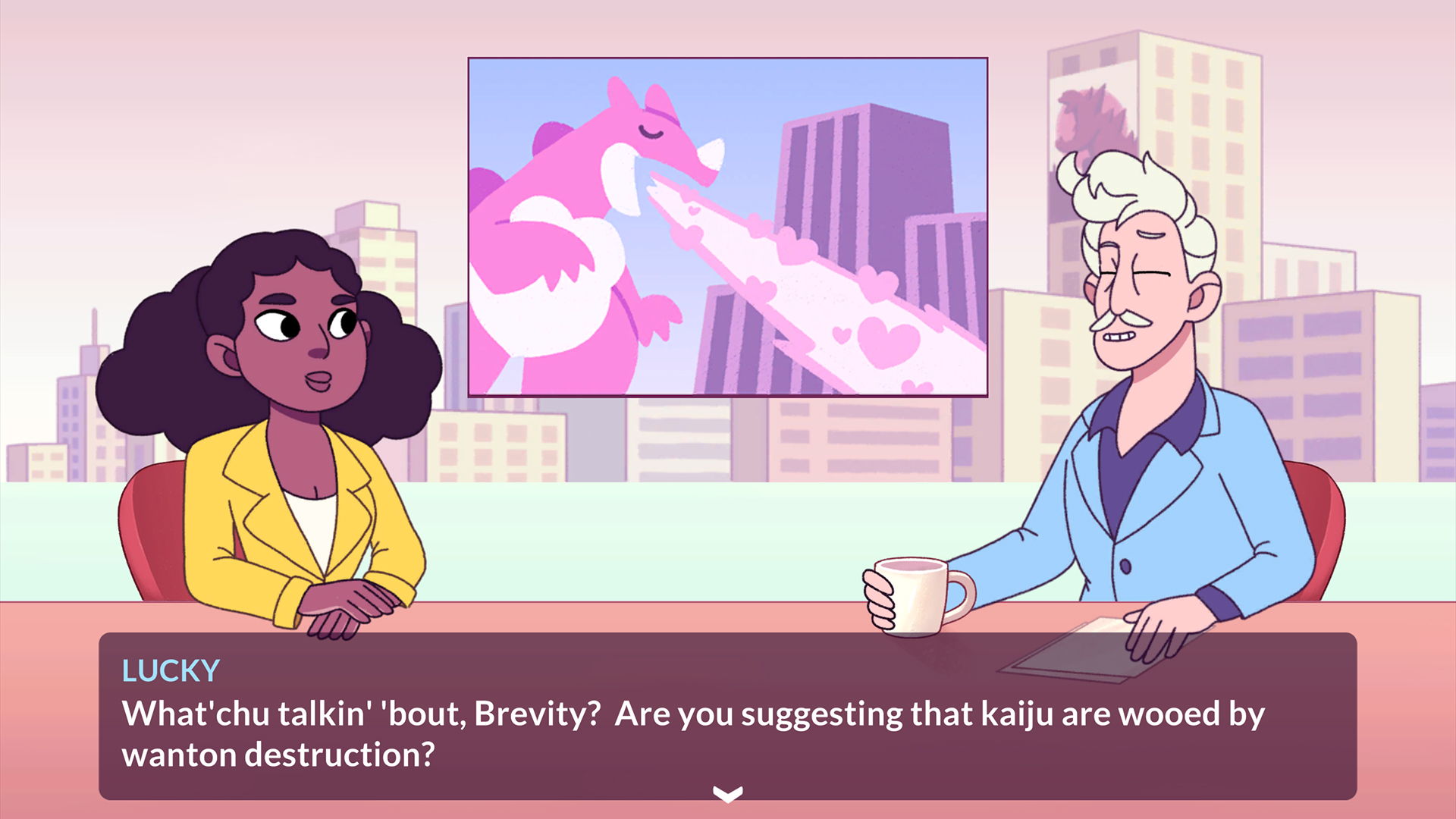 When it comes to the narrative as a whole, it’s a little bit of a letdown. I don’t take issue with the fact it doesn’t take very long to fully date one of the characters, I just wish there was something a bit extra; maybe little in-between clips of what else happened in the relationship, like phone calls or making dinner together. Only seeing the dates definitely makes me feel like an outsider looking in; I don’t feel like I’m really part of the relationship, if that makes sense. Everything is very surface-level.

The art is perfectly suited to the theme of love. Everything is cutesy and cartoony, making what could be terrifying monsters more accessible. Let’s be real, a game with literal Godzilla dating would be much, much different! The uplifting music makes me feel hopeful while dating, even if it’s not going so well.

Kaichu – A Kaiju Dating Sim could have easily been bland, but it’s not (despite the lack of oomph to the relationships). The game is adorable, funny, and relatable on a personal level. I quite like the way the entire dating experience is framed by the reporters, it was an incredibly creative way to link the dates to each other as well as to deliver a little bit of narrative to go along with the dating experience. The dating pool is quite varied, with someone for everyone… well, hopefully. You never know with love, do you?

It’s difficult to review fandiscs, because they’re a step beyond…

We need more effort put into streaming (independently of subscriptions)