Joining a cult has never been so cool.

Religion is one of those topics you’re never meant to discuss in polite society. When it comes to video games, it’s one that’s historically either been airbrushed out of games to avoid offence, or dealt with in very broad brush strokes to define it away from existing real-world religious groups.

Cult of the Lamb, from Australian/UK developers Massive Monster isn’t having any of that, mind you. As the name suggests, it’s a game about cults.  What’s the difference between a religion and a cult? It’s largely one of scale, and you’ll find yourself at the start of the game taking on the role of the very last lamb.

Why are you the last lamb? It’s because that while you thought that all sheep did was hang around in fields growing wool, it turns out that they’re actually in thrall to a dark, hidden eldritch god that might also be a cat, at least based on the early impressions you’ll get of “The One Who Waits” after he saves you from being sacrificed. 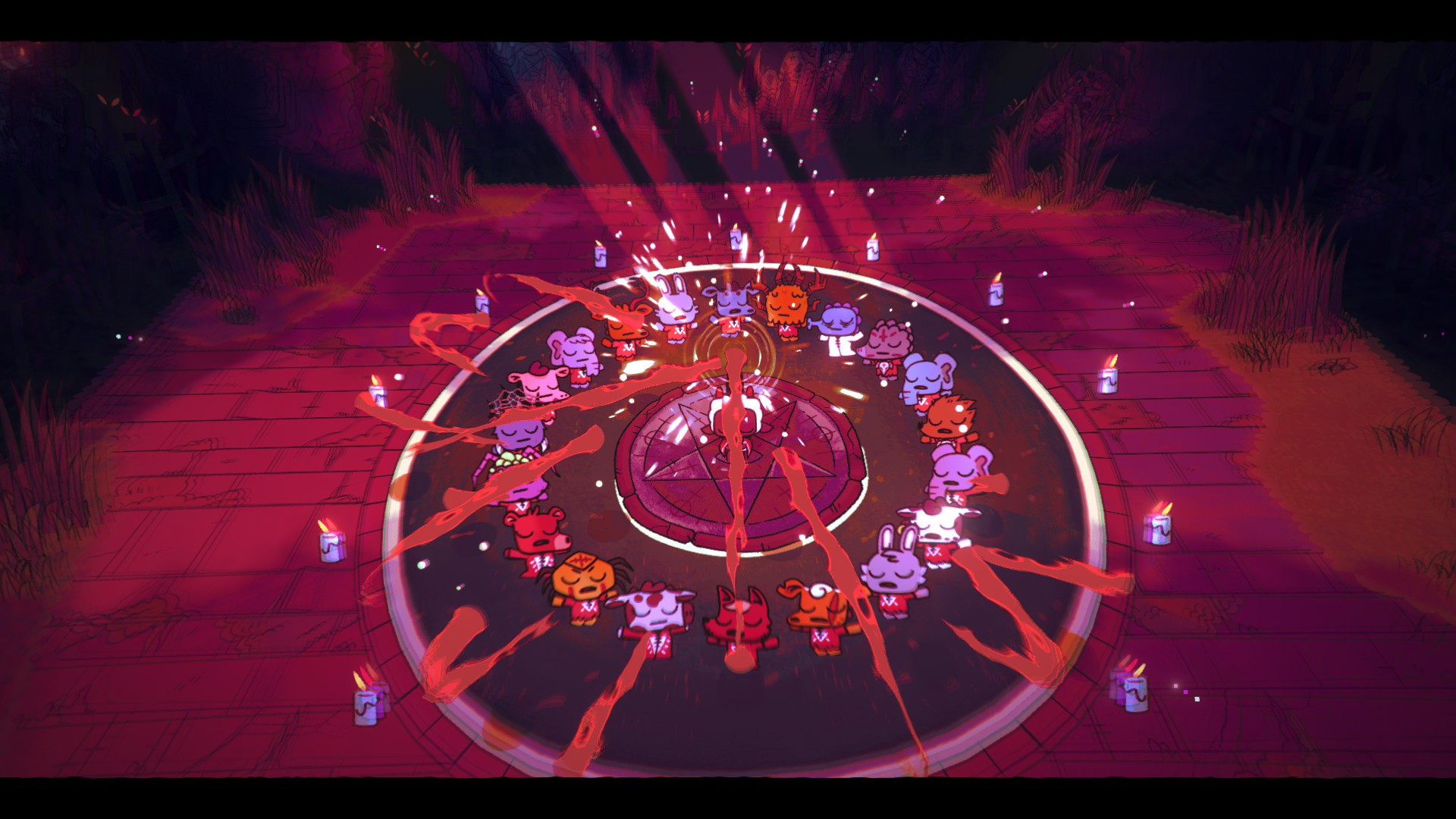 In thrall to your dark lord, you’ll then embark upon a quest to take down the four bishops who keep your shadowy demon pal locked away. Actually, it’s effectively two quests, because Cult of the Lamb successfully fuses together twin game styles. For much of the game you’ll be in resource management mode, building up your cult’s following and base, whether that’s farming plots, places for your followers to sleep, religious buildings such as missionary huts or tabernacles or demonic summoning circles.

The other half of Cult of the Lamb is a randomly generated dungeon romp where you’ll work your way up to the deadly bishops, but also where you gather resources of all types – everything from super-common grass to more esoteric resources and plenty of followers as well.

Most other god games tend to treat followers purely as ways to generate faith resources – and that’s still true for Cult of the Lamb too – but you’re constantly reminded that your followers are more versatile resources too. Over time, they may become disaffected with the cult and start spreading heresy, at which point you’ve got to decide whether to reeducate them, imprison them, or simply stab them in the back. All three approaches have benefits and drawbacks. 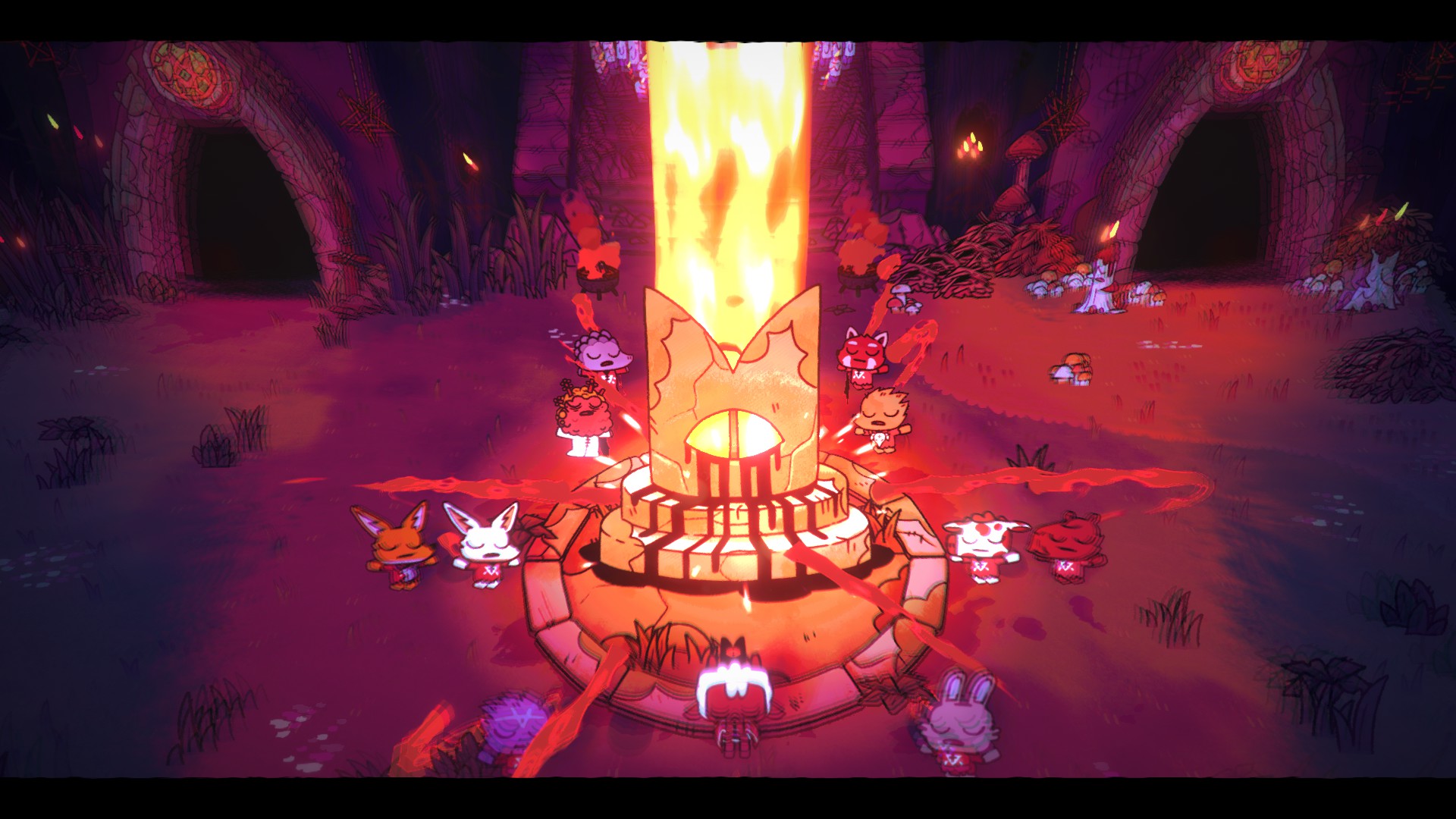 For my part, I tended to favour prison and re-education, carefully placing the prison stocks right in front of my cult’s corpse pile so that the dissenters would have something to look at while they learned the one true way. It’s the little touches that count when you’re a considerate cult leader, no?

Similarly, your followers age pretty quickly in the game, eventually dropping dead. Cult members don’t typically like corpses that much. But do you bury those corpses, turn them into compost or tear them apart in order to produce meat for your followers to chew on? The choice is yours. And, yes, I did quite often mince my dead followers up into meals for my dissenting followers to eat. It’s a waste of good protein! Stop looking at me like that.

At first, The Cult of the Lamb seems to be more heavily balanced towards its cult simulation, because your earlier, weaker lamb leader isn’t terribly good in the combat sections, and getting used to the slower combat style and long dodge roll mechanics is a little clunky. This is to say that I struggled more with the game’s earlier dungeons than I did the latter, although that wasn’t just a case of getting used to specific movements or the game’s randomised combat buffs, delivered through tarot cards. As time goes by and the faith of your followers builds up your abilities and opportunities, it gathers steam and becomes considerably more fun. 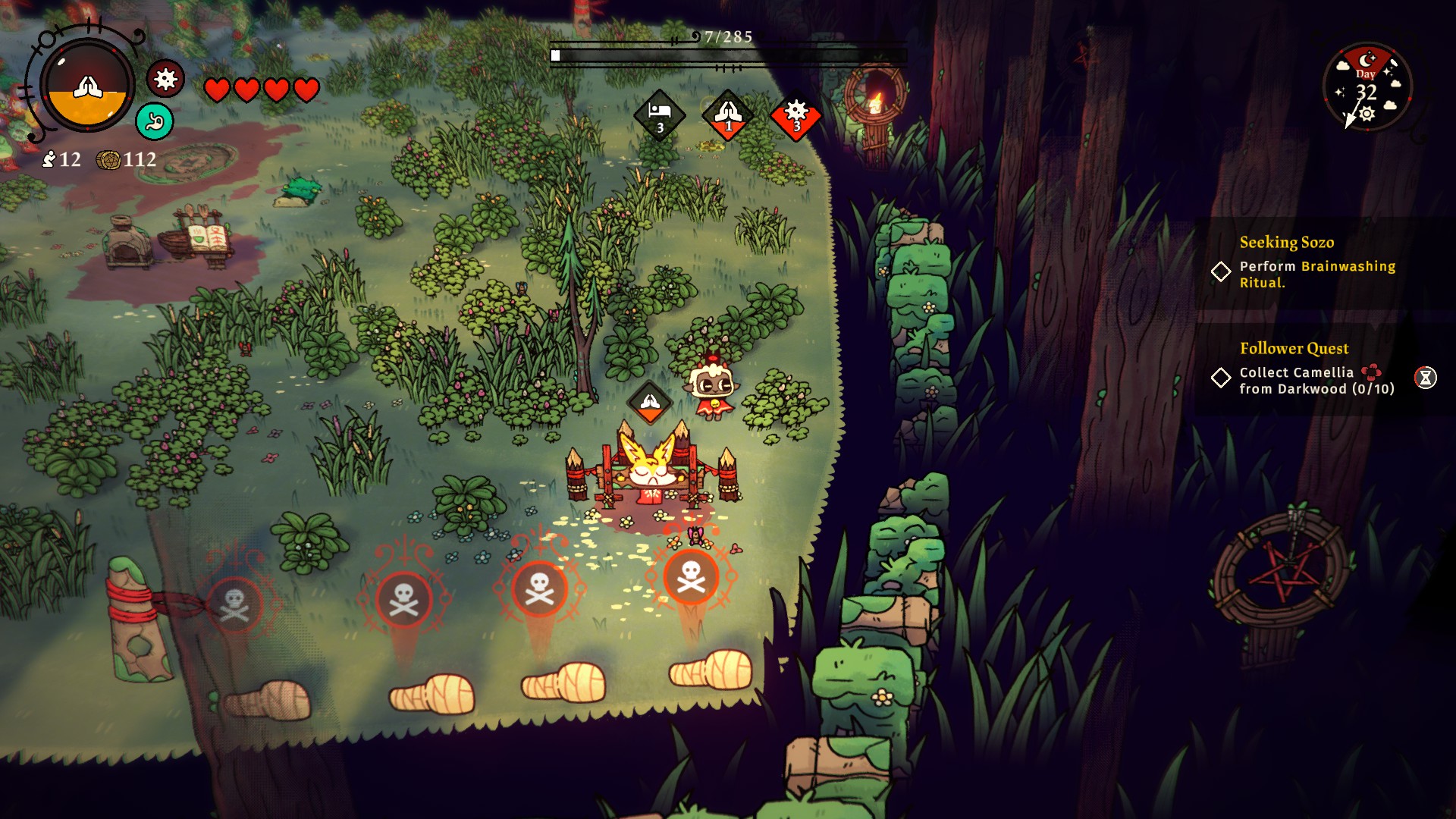 Because Cult of the Lamb uses a time clock that keeps running whether you’re tending to the flock or running through a dungeon, there’s even some resource management in play when you’re in combat. Spend too long in the dungeons and you’ll gather plenty of wood, stone and grass, but back home your flock will have lost faith, become hungry and crapped all over the place – and somebody’s got to sweep that up, usually you – if they haven’t absconded with the collection plate takings in the meantime!

As an aside, if you’re at all coprophobic, this isn’t going to be the game for you. Your animal followers poop absolutely everywhere, but their poop is used to fuel fires, grow crops and, upon request from some of your more unusual followers, make meals. Yes, you can literally force your cult members to eat shit, and sometimes they’ll ask for precisely that. It turns out that even animals who join cults can be a little on the eccentric side.

Stylistically there’s some obvious forebear games – titles like Don’t Starve or The Binding of Isaac come to mind – that you could compare Cult of the Lamb to. The art style and animation does a fantastic job of bouncing merrily between the abjectly cute and the starkly horrifying. One minute you’re welcoming a new elephant-styled neophyte into the flock, the next you’re sacrificing him to tentacles that emerge from a portal in the chapel floor, because you could really use the faith boost in your remaining followers. It’s all in a day’s work for a busy lamb cult leader. 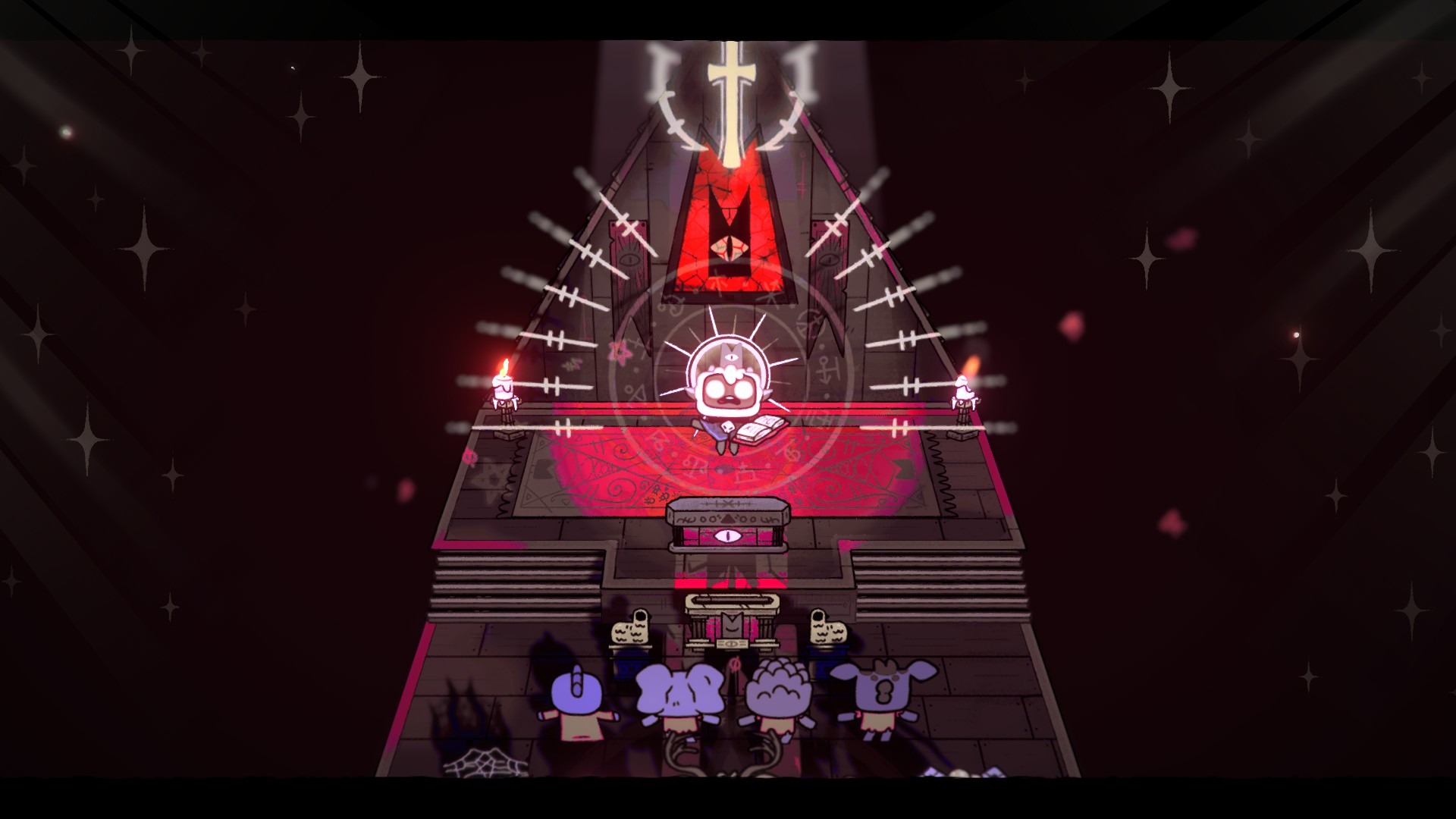 All of this could be good without being great, but where Cult of the Lamb steps up is in the way it’s been balanced, both for gameplay and moral choices. As you progress and gain new abilities, you unlock a couple of what are effectively technology trees. The primary building tree works much like any other, and over time it’s possible to unlock every single building type. However, the rituals and doctrines you choose for your cult are selected from binary lists, with a moral directive behind each. Do you want your cult to celebrate youth and be more productive, or venerate the elderly and gain more faith? Is resurrecting the dead OK? Do you need a “holy day” of rest? Is it OK to sacrifice a follower by dunking them in molten gold?

I feel certain you can guess my answers to those questions, but just in case you can’t, I went for venerating the older cultists to glean yet more faith from them, zombies are AOK, sabbaths are fine and followers look so much nicer with a slightly fatal golden tan. Again, this could come across as a bit pious and all too worthy in the style of some specifically religious games, but then Cult of the Lamb never takes itself too seriously, so it remains fun through its relatively short initial playtime.

Play length is not, and should never be seen as a value indicator in games, but for whatever it’s worth, I made my way to the game’s conclusion in around 16 hours of real-world gameplay time. However, it’s a title I absolutely will return to, because it’s entirely feasible to create a very different cult with different choices, and that’s one I do want to try out for myself. Massive Monster has also made noises – but no concrete promises as yet – around post-game DLC and possibly even multi-player modes, which could lead to some fascinating post-game scenarios, depending on whether they went for competing or cooperative cult activity. 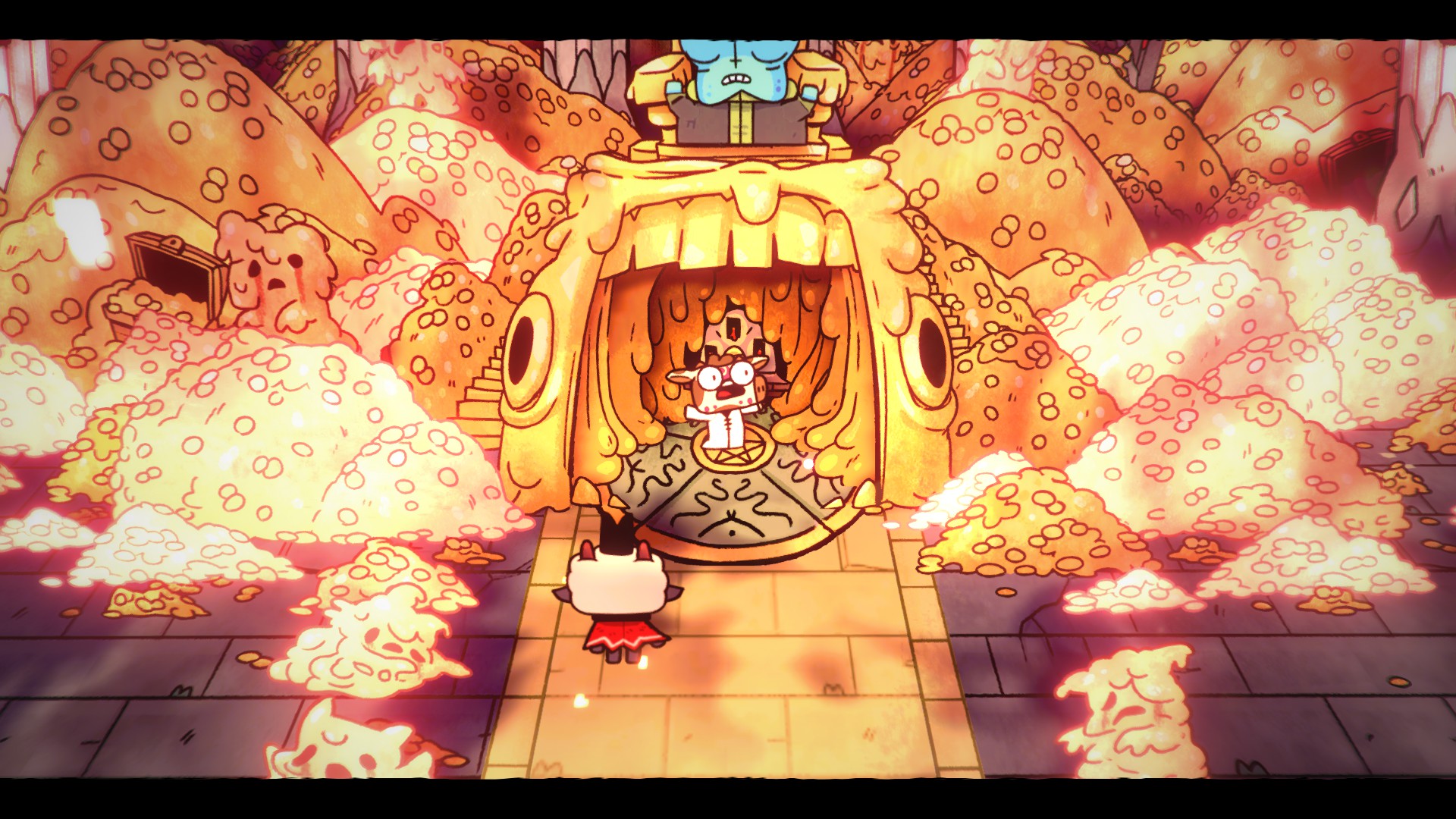 Maybe this time I won’t encase my followers in liquid gold. Maybe. 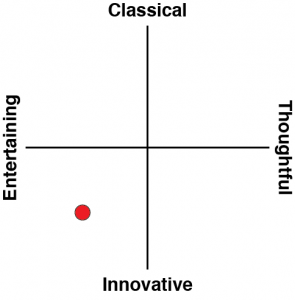