Blimey! Dinkum is the best game set in Australia, ever

Today was a pretty woeful day in Australia. I don’t want to bore the non-Australians here, but here’s the short version: we’re a country that will be at the forefront of climate change devastation. Today, our Greens political party (who went to the last election on the promise of hard action on climate change and got a record number of votes) capitulated completely to the Labor party, who proposed a climate change bill that is embarrassingly worthless. I’m not kidding here. They capitulated completely. It was a vicious turkey slap to any of us that actually cared about having an inhabitable country in the future.

Anyhow, the point of that intro was simply to say it’s nice to be able to boot up Dinkum and remember that not everything about Australia is as pathetic as the Greens. In fact, Dinkum’s an unmitigated delight.

Dinkum dropped on everyone almost out of nowhere. The developer released it to early access with no fanfare (or, it would seem, a PR budget), and were it not for a Twitter account that specialises in sharing short video trailers, I would have missed it completely. I’m glad I didn’t, but this is the kind of game that you don’t realise you want until you’re actually playing it. 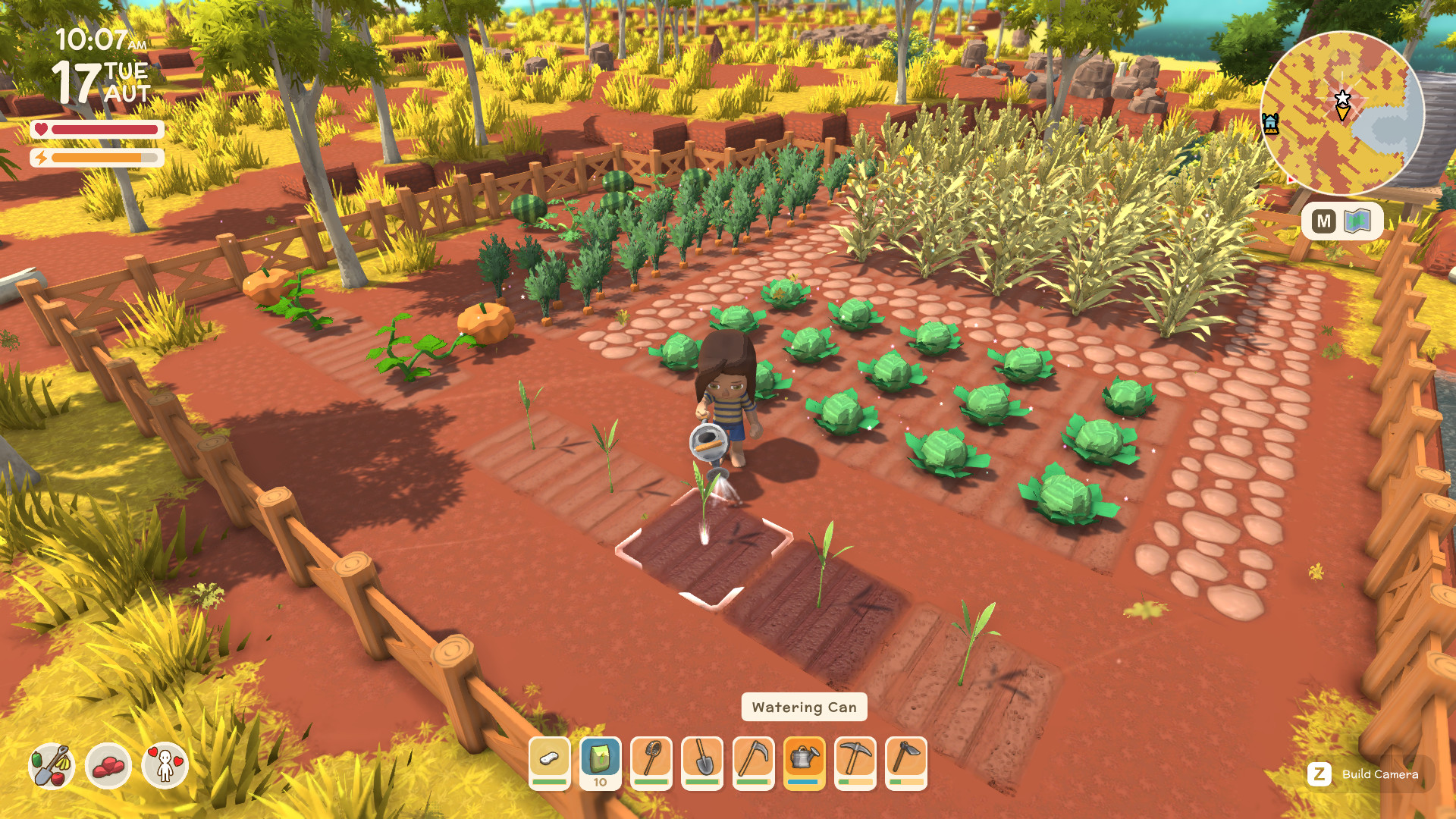 The best way to describe the game is a blending of Harvest Moon, Rune Factory, and Animal Crossing, set in the Australian outback. The aesthetic is there; scorched earth, dry trees, kangaroos, wombats, and even the Ulysses butterfly hovering around. There are even crocs, and they’ll try and take a good bite out of you, which would surely be something that would set Bob Katter off (the last political reference in this article I promise you, but if you ever want to see something perfectly – beautifully – Australian politics, watch this video, where Katter was asked about whether same-sex marriage should be legal).

You’ll do all the things you do in those laid-back farm-and-lifestyle games. You’ll start with an empty wilderness and nothing but a tent to rest in, but before long you’ll be crafting houses, laying down farmland, and setting up fences to protect the chickens. You’ll run around mining ore for metals, catching butterflies with a net, and indulging in a spot of fishing… and then completing objectives to get people to move into your growing community and continue to expand it out. If you’ve spent any time playing Animal Crossing or Harvest Moon, this is all going to feel immediately comfortable and familiar, and that’s a big part of the appeal of it. It’s not pushing for innovation or to do something new in the genre. It’s just that kind of game… set in Australia.

We don’t get many games that do Australia well (or at all). There’s the occasional effort that, you could argue, uses the country and its qualities for a bit of fun and humour (Ty the Tasmanian Tiger, for example), and bits of Australia will show up in racing games or whatever, but its rare for a game to be just plonked in an Australian setting for no explicit reason. Look at how many RPGs are coded to European settings as a standard, or so many GTA-likes are set in distinctly American cities. We don’t really have that here. Most Australians that make games set them elsewhere themselves. The few times that Australia is used as a setting, it’s because the game is actively draws attention to how Australian it is. 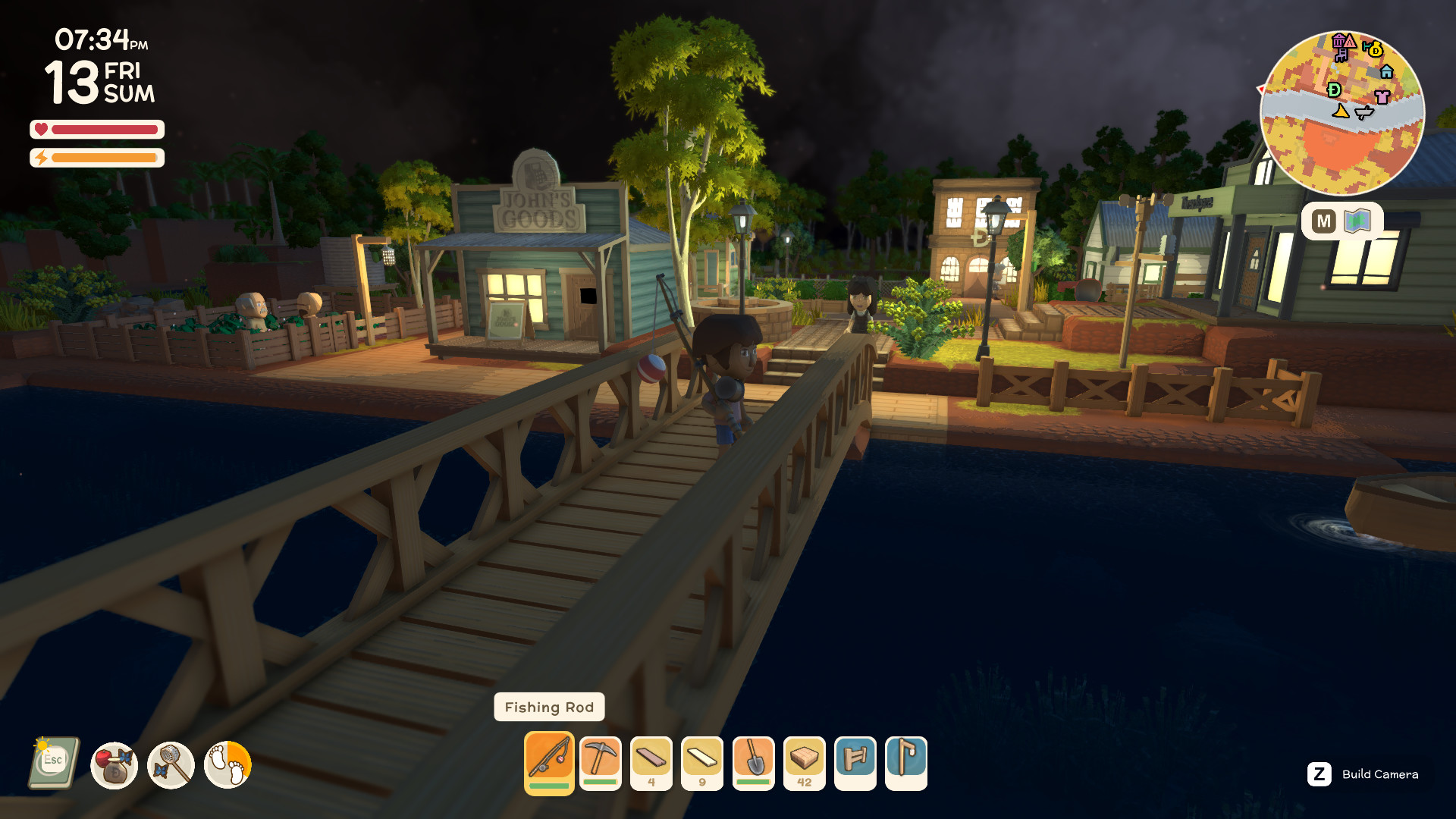 It doesn’t take long for Dinkum to settle down into a rhythm whereby the Australianness is just there. That the kangaroos bounding around in the scenery are no more unusual than it is to spot a duck in a Harvest Moon, and you’re not really thinking about how the butterflies and fish that you’re catching are specific to this nation. It’s organic, is the point I’m making here, and I genuinely love that about Dinkum.  It’s a love letter to this nation’s unique natural aesthetics that never feels contrived, and as much as this country frustrates me sometimes, I am Australian and I find great joy in having a game space that is a genuine treatment of my homeland.

While Dinkum is early access, it feels robust and refined already. I’m sure the developer will continue to work on the finer points (the controls are a sticking point for some at this early stage), and it would be nice to have some more variety cooked in over the long term, but this is an early access purchase that you can make secure in the notion that even if the developer abandons it entirely, the state it’s already in is sound.

I don’t expect the developer will abandon the game, though. In fact, I’d bet money on console ports and many years of expansion to come. The fact that Dinkum has become a darling on Steam already, despite the lack of fanfare leading up to its release and despite the early access status, is a good sign for its future. This is a downright wholesome and good-natured thing, that manages to be different enough on account of its setting, while also offering fans of a familiar genre a familiar experience. We may well be looking at the next Stardew Valley here.

This excitingly innovative open-world multiplayer puzzle game has the potential…

I haven’t written about Hokko Life for over two years…

Deathverse: Let it Die is being delayed after beta testing