Ogre has probably been around longer than you.

Ogre is a classic board game that has been around in some form or another since the ‘70s. It is fondly remembered in the same way that the likes of Hero Quest or earlier editions of Dungeons & Dragons are: for older players, these are the kinds of games that generate a strong nostalgia for childhood gaming sessions. Ogre on the Switch is a port of the 2017 PC adaptation of that classic experience. The base game is enormously influential, and the developer Auroch Digital, did a decent job of capturing its appeal with the adaptation. The main problem is that Ogre really does show its age through its systems.

Board games are not unlike video games; as creators learn new technics and mechanics, designs change in kind. For instance, board games have taken steps to remove dice rolls from the systems as far as feasible, to reduce the element of luck and to focus on indirect player interaction (i.e. players have a minimal ability to influence the other player’s game, and the winner is the person that simply does their thing the best). These “Eurogames” are a genre that is very much in vogue, and if you’ve played Catan, Carcassonne, Puerto Rico, Agricola, Lords of Waterdeep, Ticket to Ride, Wingspan or any of a dozen other popular examples, then you’d know how they work. These have been so popular that they’ve influenced developers of other “genres” of board games to likewise reduce focus on randomisation and instead provide players with easy to learn but intricate systems that reward logical and creative thinking.

Ogre comes from an older time, where the dice roll was overwhelmingly influential to the result of most games. Think of the era where people were playing Monopoly, Risk, The Game Of Life, Clue/Cluedo, Axis and Allies, and so on. These were all games where pure luck could rampage through the best-laid plans and deliver you a defeat. Could that be exciting? Sure. There’s nothing quite like tossing a dice down knowing full well that the result could be the difference between victory and loss. But at the same time, that approach took a lot of the agency in the results out of the hands of the players. 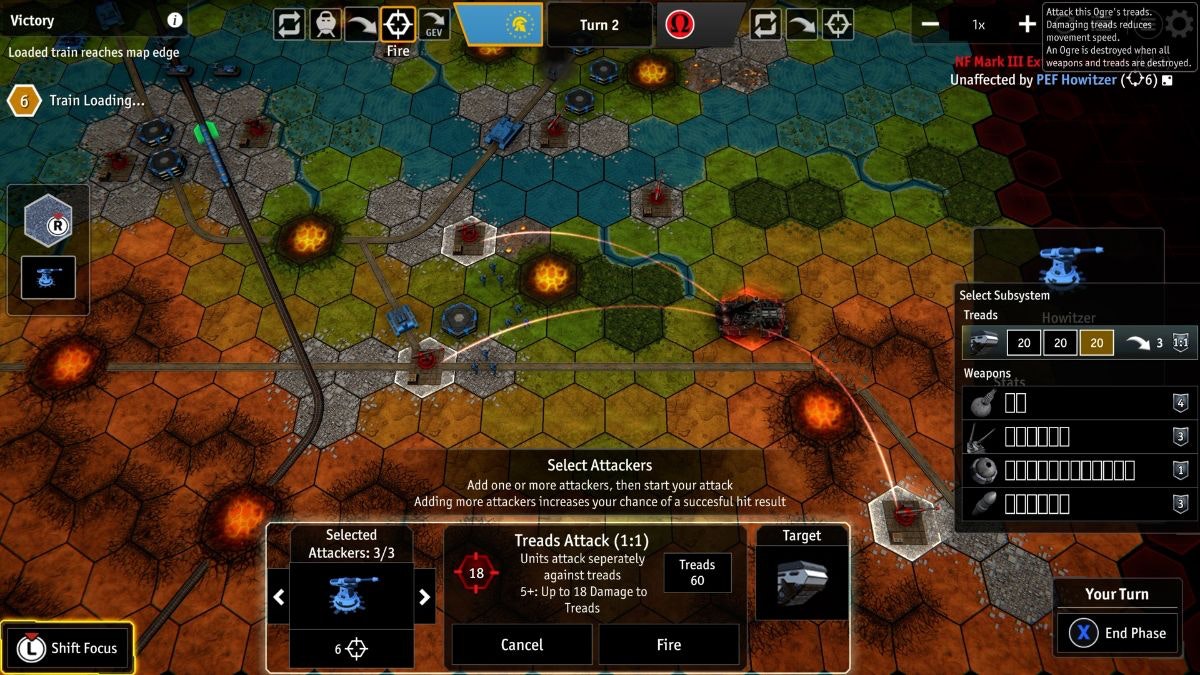 Ogre relies heavily on dice rolls. It is a military combat game, and therefore strategically orientated, and it has an interesting quirk to it that further adds to the strategic quality (we’ll get to that shortly), but it’s also a game where a single instance of pure luck stands between your most valuable unit surviving an attack completely unharmed or being totally destroyed. There are things that you can do to stack the odds in your favour (for example, attacking an enemy with a single unit might require a “5+” dice roll to destroy the enemy, but attacking the enemy with a stack might mean a “2+” roll will be sufficient), but there’s always the potential for things to go wrong. A couple of bad dice rolls in a row can be intensely frustrating.

The game’s quirk is that the two sides facing off against one another are not remotely even in construction. On the one side is a single “Ogre” – a single unit of immense power, which typically has the goal of getting off an edge of the board. The other side is made up of a vanguard of tanks, missile units and infantry. Individually they are all vastly outgunned by the Ogre, but can the squad come together to bring down the powerful individual they face.

This really is a great concept, and within the game’s mechanics you can actually choose to target different parts of the Ogre to target. Do you risk wasting a turn on trying to defeat a cannon that’s decimating your ranks, when your real target is the Ogre’s tracks that are conveying it to its objective? To you swamp the tank with everything you’ve got in the hope that sheer numbers will do the trick, or do you try and play a war of attrition instead? These are all good strategic challenges to throw at players. If only it weren’t possible to the dice roll to undo the player’s answer to the challenges. 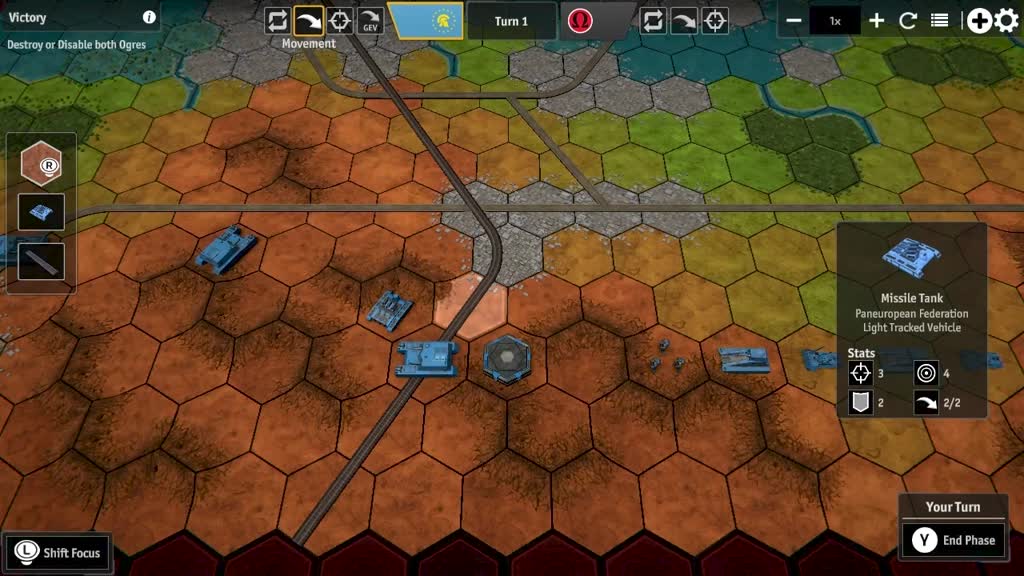 Some very pedestrian aesthetics do not help the digital adaptation of Ogre. The developers have decided to depict the board in the same way that the tabletop edition does, and that means you’re looking at flat hexagons that are coloured differently to represent terrain. Units are animated and move around, but lack personality and character. There’s no reason that a board game on Switch can’t be beautiful – see Wingspan for proof of that. Or even the version of Risk that’s on Switch, for an idea of how an older game could be visually modernised. It’s just that in their apparent rush to create something authentic to the physical board game, Auroch Digital instead created something quite generic.

Much more critically, however, is that there is a dearth of things to do in this package. There is just a handful of “campaigns” and “skirmishes” that are basically the same thing (combat scenarios, or more-or-less the same in terms of goals and objectives), and there’s local multiplayer, but no online multiplayer. This oversight is an especially big deal because Ogre’s AI is incompetent. I’ve yet to lose a match, despite making some truly horrible strategic mistakes in my first couple of games, and despite having never played Ogre before this. At the very least, Ogre needed online play to give strategy fans – the sole target audience of this game – something substantial to bite into. Finally, as a single-player title, the lack of narrative also hampers its long-term longevity… and no, the short one-paragraph text to explain the scenario does not count as storytelling.

Ogre is a highly influential and important game, and on that basis, there might be some value in picking this title up for nostalgia’s sake. However, it is also one of the poorest board games on the Switch. The lack of decent AI, and multiplayer that’s only available offline, are issues that no strategic board game in 2022 is ever going to be able to overcome.