Capcom shows 'em all how it's done.

Capcom’s previous retro fighting game compilation, 2018’s Street Fighter 30th Anniversary Collection, was an excellent and loving historical record of Capcom’s most valuable property. Four years later the company has done much the same thing with the Capcom Fighting Collection… but if anything I think this is the superior option for fighting game fans.

It’s not that I think that the ten games hosted in this collection are inherently superior to anything from the Street Fighter series, but rather it’s because these games are far more niche, and therefore by being in a collection such as this, their discoverability is improved. This is the first time that Red Earth has appeared on consoles and PC, for example. Vampire Hunter 2 and Vampire Savior 2 are available in the west for the first time too (albeit with a Japanese-only language option). The Darkstalker series deserves to be remembered, and Gem Fighter, Puzzle Fighter and Cyberbots round out an eclectic package. There is every chance that you’re not so familiar with these “B-tier” Capcom fighters, and that’s part of the appeal of a retro collection – it’s a chance to experience things that you might not have, alongside the things you have fond memories for.

Once you start playing these games you’ll wonder why Capcom hasn’t dusted them off again for a modern revival. Darkstalker, especially, is a worthy series, being based on various horror traditions, and offering a rather lovely, if cartoonishly morbid setting, backgrounds, and combat animations. Red Earth, meanwhile, is one of the strangest fighting games of all, featuring an RPG-like levelling system within bouts. This is a complex fighting game, and not really for me, but it is certainly one of the most experimental fighters of its time and it’s worth playing now just to see what it did within the genre. Puzzle Fighter and Gem Fighter add some cutsey charm to the package, and to round things out, there’s a port of one of the finest Street Fighter 2 versions. There’s a lot of variety across this collection of games (something that for obvious reasons the Street Fighter Collection lacked), and that should keep people playing (and mastering) the respective titles for some time to come. 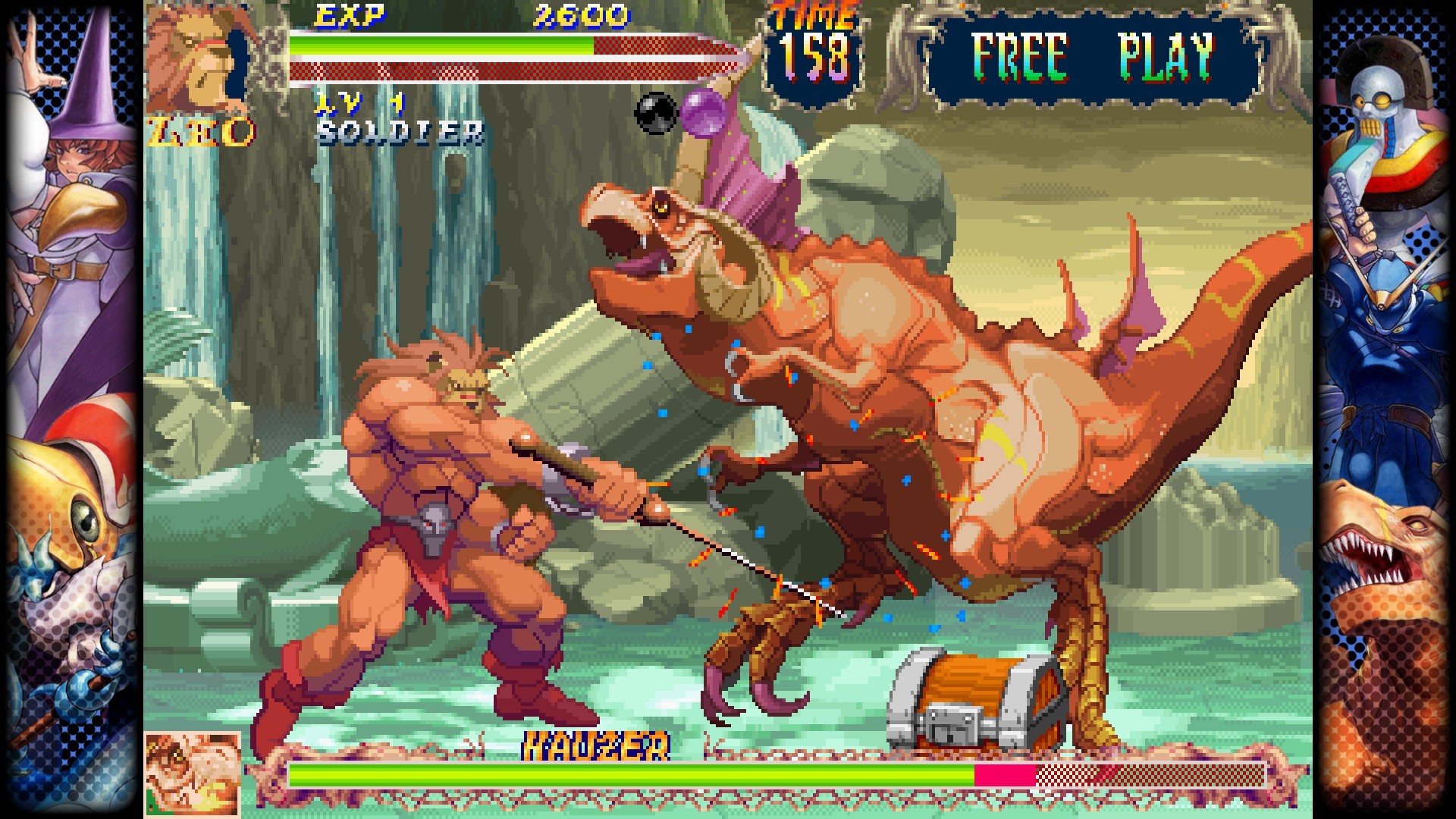 All titles in the collection are taken from the arcade editions. Now, on the downside it means that the extra characters that were added to a few of them for the original home console ports (to PSP, PlayStation 1, etc) are not in this collection. On the other hand, the arcade versions of older fighting games are always superior in detail and precision, and that is well worth trading some characters for. Grab yourself a decent quality arcade stick, and the experience is a 1:1 parallel to playing in the arcade somewhere. Meanwhile, the Switch JoyCons aren’t really designed around fighting games, having these games in playable form for on-the-go play is a nice bonus in itself.

There are also a wealth of features to ensure that you are able to enjoy these games on your own terms. There are seven screen filters to choose between, so you can enjoy the “CRT” effect of dank old arcade, or enjoy the sprite art in their full, unfiltered quality. There are also all kinds of aspect ratios, allowing you to stretch the image to full screen if you don’t mind the deformation, or play in pixel-perfect format if you prefer.

All the titles in the collection can be played online too, which is important for any fighter. I didn’t notice any significant lag when I got into matches through testing, but then I’m nowhere near good enough at fighting games to tell if the netcode is esports-worthy in this instance. Local multiplayer is excellent too, of course, and given that these are arcade games and therefore very thin on the single-player material, it almost goes without saying that the longevity in this collection will be in finding people to play with. 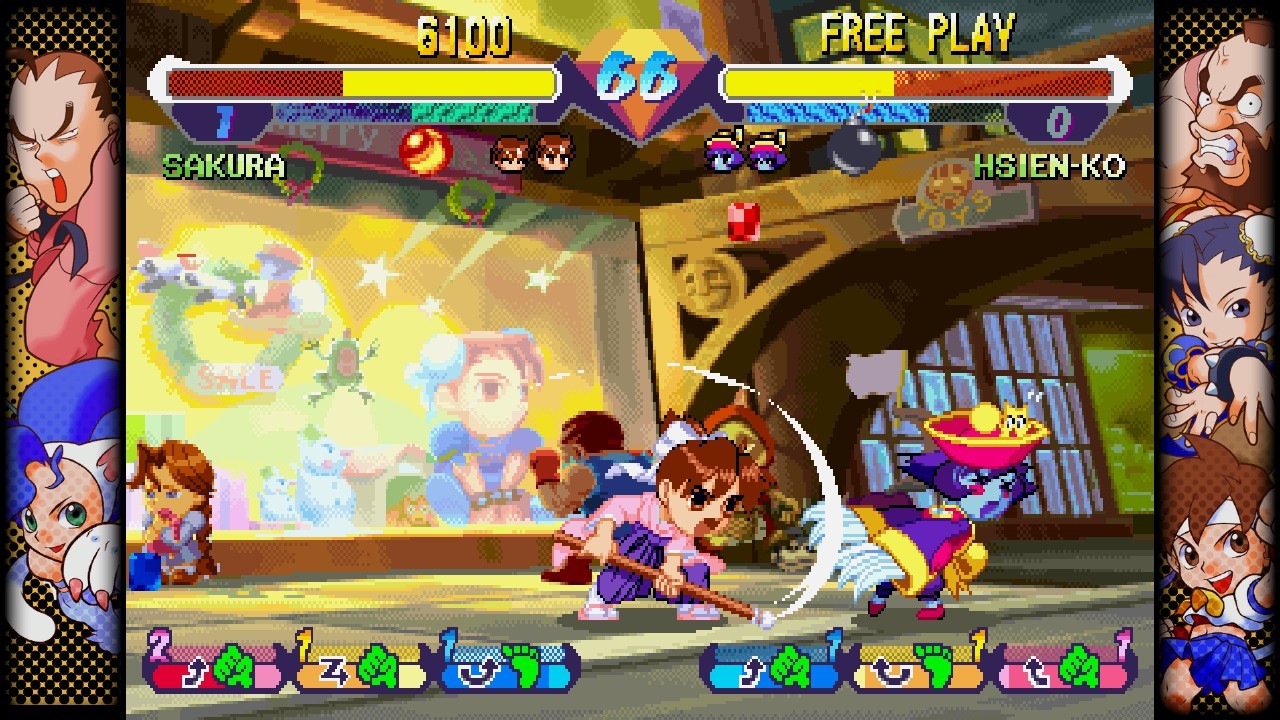 However, as good, considered, and complete as all of the above is, the real killer feature is the museum. The Street Fighter collection had something similar, but this package has over 500 words of art to scroll through via a digital booklet, and 400 pieces of music to listen into. This is something I wish the other publishers of retro collections took much more seriously, because it adds so much to the compilation and really leaves the impression that you’re exploring a virtual gallery and exhibition, rather than just buying into a collection of old games that have been thrown together to net the publisher some money. I could spend hours exploring that museum feature alone.

Much like the Street Fighter collection before it, Capcom Fighting Collection is a truly stand-out effort to preserve not only the games that were included in the collection, but the artistry and stories behind them. You don’t even need to be a fan of the fighting genre to appreciate just how valuable this approach is to retro compilations… and the unfortunate downside to this effort is that it makes every other retro compilation seem so pedestrian by comparison.