You know what they say: There's a fine line between love and hate.

Perfect Gold: The Alchemy Of Happiness highlights just how mundane love and romance can be. I don’t mean that in a negative sense, though. Far too often in the arts romance, as a subject, either deviates toward smutty eroticism or overly sentimental tear-jerking. There’s nothing inherently wrong with either of those approaches and there’s a role for them to play in entertaining us, but in reality romance – and, particularly, relationships – are far less dramatic. They’re a thing people grapple with on a day-to-day basis. That’s what Perfect Gold taps into.

The game is centred around two girls – students at a magical academy – from very different sides of the track, that fall passionately in love. Unfortunately, that was a year ago. Now, they absolutely hate one another. That anger becomes so extreme that their teacher puts them both in detention, and sadly that means that they will miss their city’s big festival that they both were looking forward to.

So they conspire to slip out of detention together, and that results in them spending the day at the festival in one another’s company. While that’s perhaps not what either would have wanted, it does afford them the opportunity to start sorting through their issues and see if some kind of relationship can be salvaged. Despite the magical fantasy setting (which wasn’t strictly necessary to the plot), the story of Perfect Gold is perfectly normal; two people that clearly have ongoing feelings for one another trying to resolve their issues. 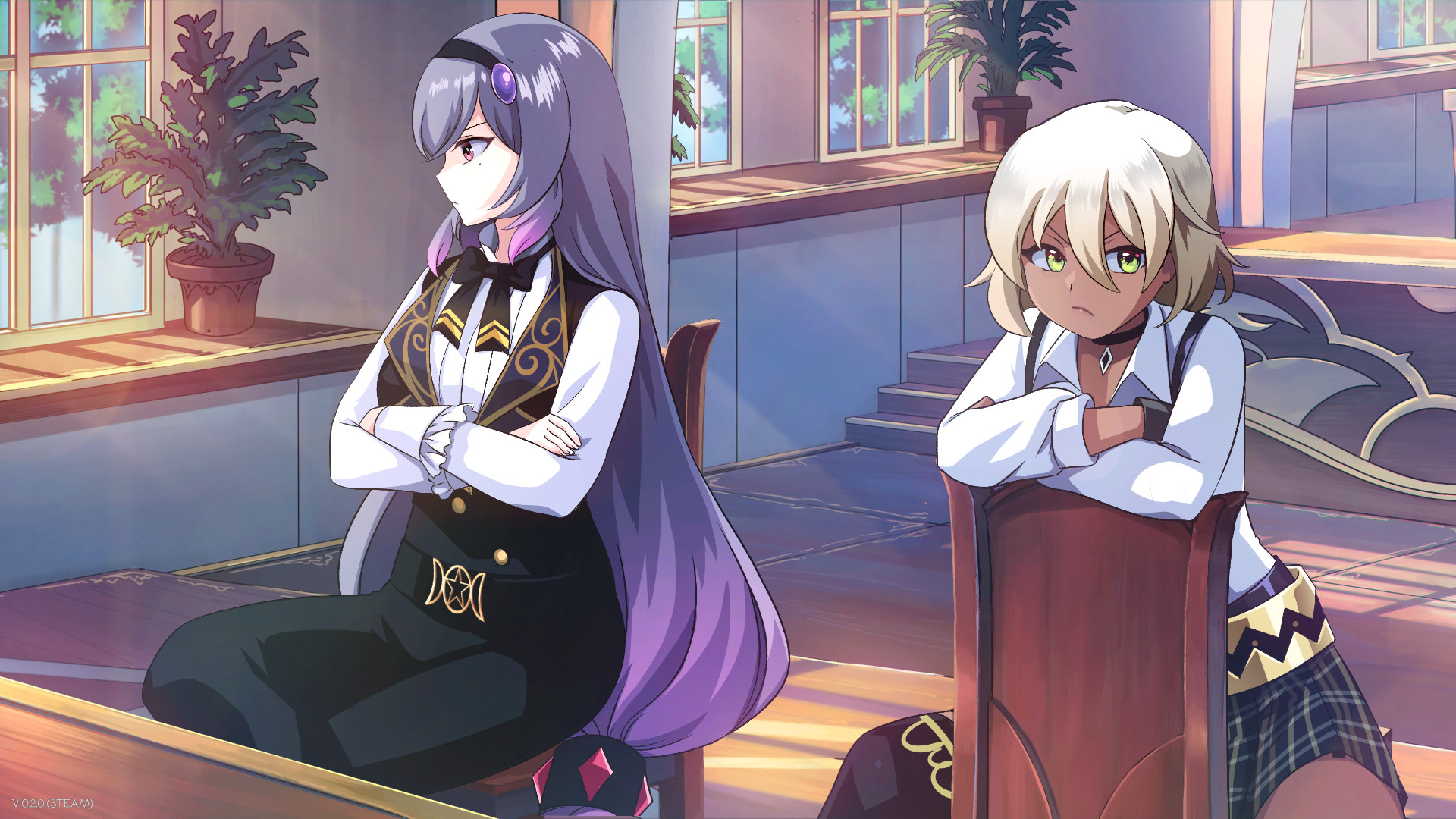 For the most part, it’s written well and believably carries two very different characters. Audrey Clary is a “princess” and wealthy family heiress, while Marion LaRue is a rebellious and tomboyish girl from the working class. That yearning socio-economic gap is a sore point for both, that they use to insult and belittle one another. Unfortunately, it’s also one of the most well-trodden story hooks of all, and because this game isn’t interested in doing anything with it beyond using it as a funnel for the two girls to bicker at one another, it does come across as shallow. Believably so, thanks to the writing, but an empty motif that isn’t really adding anything to our collective literary tradition.

As for the root source of their schism, we don’t learn about that until much later in the game, and that brings me to the biggest problem Perfect Gold has: it’s too ambitious in scope for what it’s actually doing. All this jumping back and forth in time, and dancing around the big reveal of how the girls could go from love to hate is handled in a sometimes painfully short time span. The entire game is only about 30,000 words long. I’ve written visual novels that are longer than 30,000 words. It’s not nearly as impressive as the number sounds. That’s not to say that a 30,000-word visual novel is poor value. This is not a criticism on the basis of content. However, the plot jumps back and forth through key moments over the last year, and the strength of the game’s emotional pull rests on your ability to connect to these two characters really quickly. Nothing is expanded on or explored quite to the depth that it should be to achieve those outcomes. Finally, as I mentioned earlier, the Harry Potter-like setting of school for magic users is completely pointless. In fact, a perfectly normal college or school would have been far more appropriate for how perfectly normal these two girls are. Perhaps the concept for the game was a bit grander, and if it were 50,000 or 60,000 words long the developers could have done a better job at explaining the setting and making it relevant to the romance.

For a budget visual novel, the art is lovely. It’s centred on the two girls, but the sprites are nicely detailed and express good levels of emotion, and the CG scenes are powerfully romantic in tone. The voice acting, however, needed to be turned off, and the music, while pleasant, seemed slightly out of place. There were moments where I felt it would have belonged better in a Dragon Quest-like game. Finally, there’s a slight technical issue in that there seems to be some significant lag in pulling up menu items and the like. It’s hardly a game-breaking issue for a visual novel, but it is noticeable. 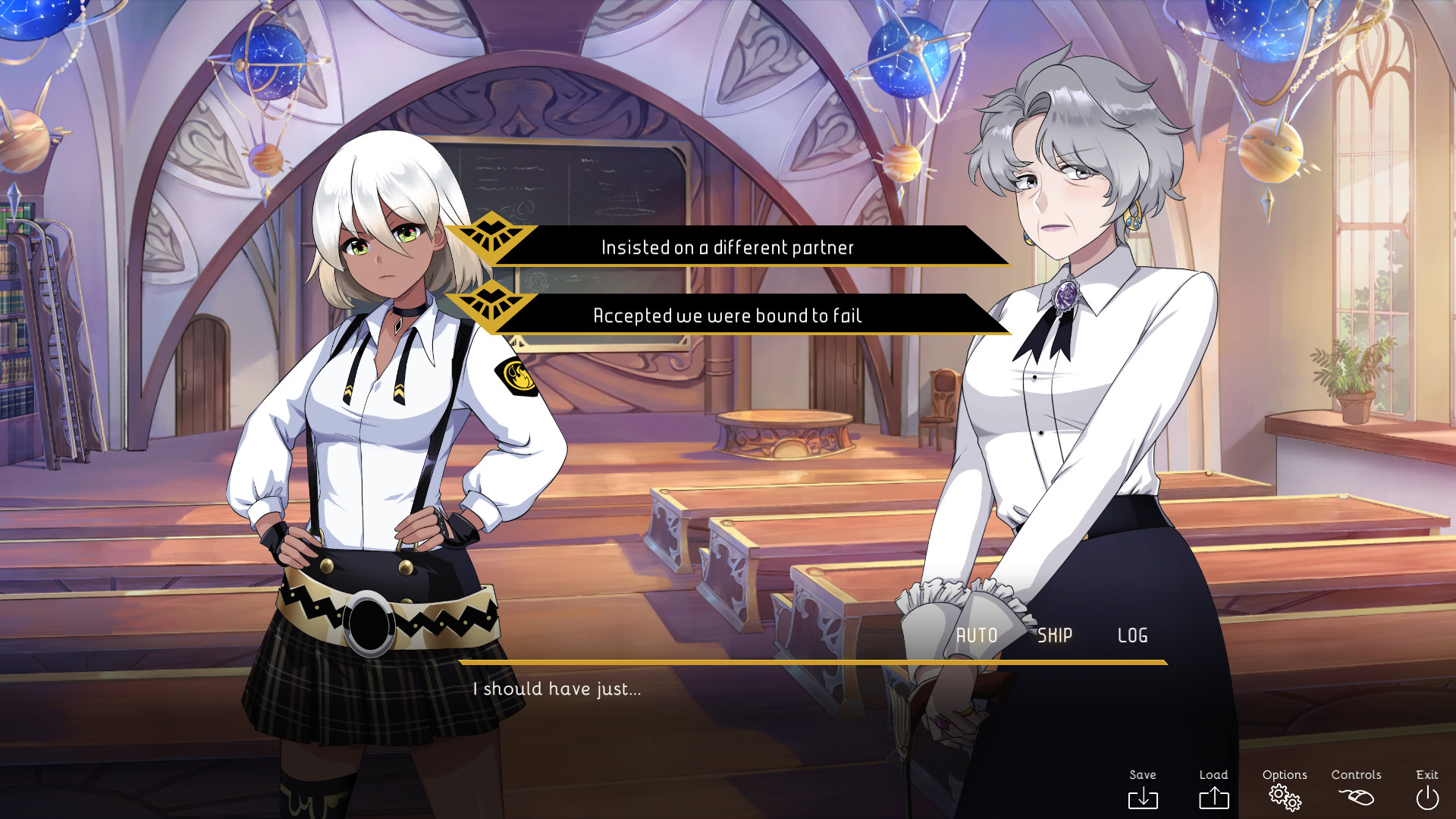 There are multiple endings, but you’ll breeze through everything that Perfect Gold has to offer in around five hours. The game doesn’t have anything particularly profound to say, but the combination of coming-of-age and romance does come across as sweet and wholesome. This might not be a game that you exactly remember, but the earnestness of it is charming and you’ll have a big smile on your face as you play.