Zombies have never been so terrifying (terrifyingly boring, that is).

It’s a lightgun game where the lightgun aim doesn’t work properly. It’s an arcade game that offers no challenge no penalty for running out of lives. It’s a remake that has lost all the atmosphere and appeal of the base game. Congratulations, developer MegaPixel Studio, I genuinely have no idea how you managed to do this but you have overtaken Uwe Boll as the worst thing to happen to The House of the Dead. Uwe Boll is the most incompetent film director in history. You beat him.

There was always something a little scandalous about House of the Dead in the arcades. With the curtains that were hanging around the booth promising very adult thrills, ducking into the booth for a game was a little like sneaking into an adult entertainment club: there was something fundamentally juvenile about the whole thing, but you certainly felt transgressive doing it. At least, I did as a youngster. When the rest of the arcade was a nice and colourful mix of fighting games, racing games and “skill testers”, having this creepy haunted house fairground ride sitting right there was enticing just for promising something a little nastier.

The game itself was fine. Actually, that’s not fair. It was a lot of fun. Of course, for all the promise of something too vile to allow impressionable minds to see, once you actually sit down to it, the game is no more extreme as an experience than those aforementioned haunted houses. Nonetheless, you could still easily enjoy it as a visceral thrill in an even-more-B-grade-than-Resident-Evil zombie trip, with blood and limbs flying everywhere, and the on-rails nature of it means that the jump scares and challenge could be controlled by the developers to the most finite degree. Within its own little genre, House of the Dead stands with the greatest, and so I don’t begrudge MegaPixel and publisher, Forever Entertainment, for taking a remake on. What I cannot believe is how incompetent this remake really is. 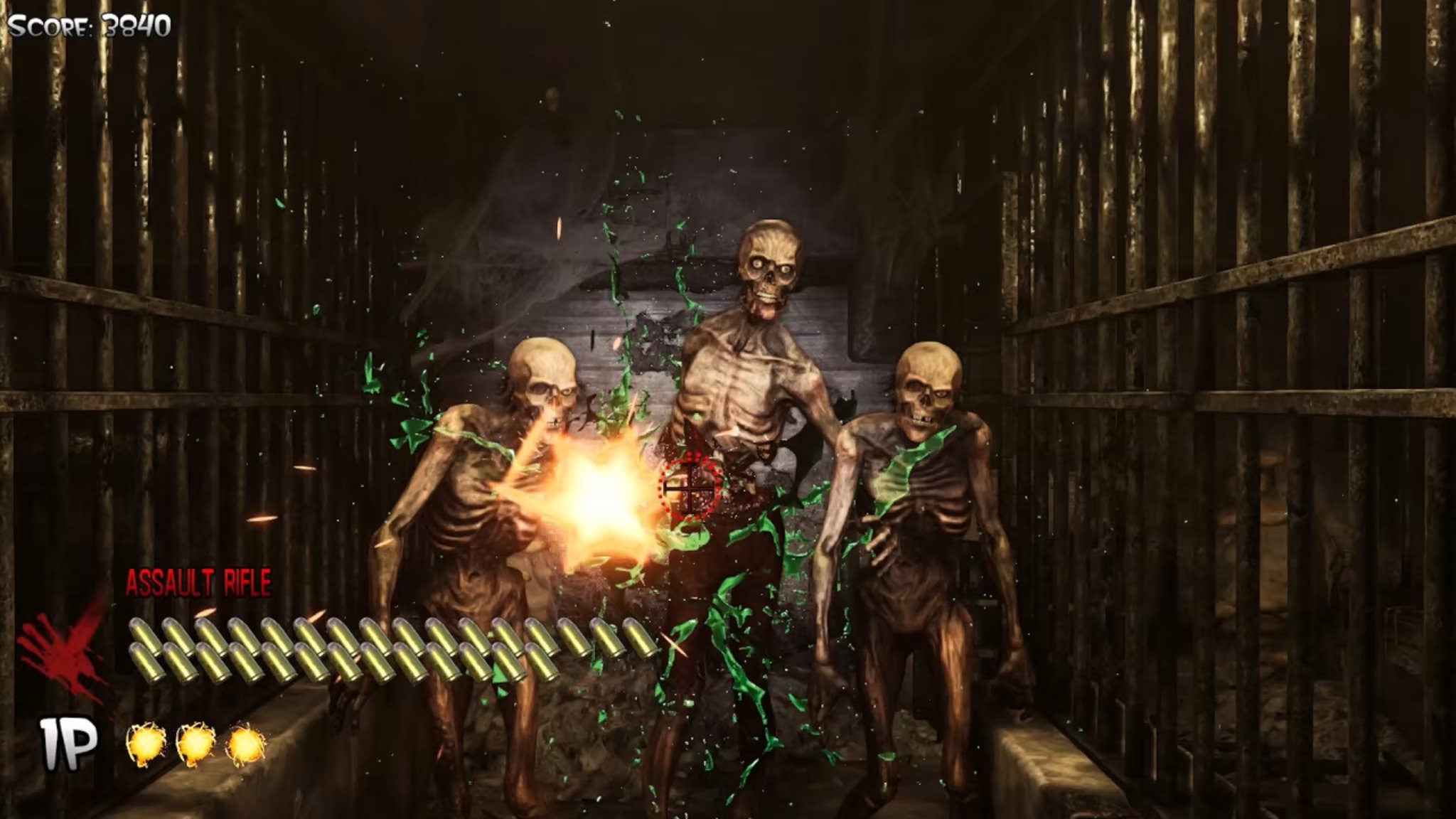 Most critically, and absolutely catastrophically to the whole experience, the gyro controls do not work well at all. This should be a slam-dunk experience: point the JoyCon at the screen and start firing away. Because the Switch is portable, you would have even been able to play this iconic multiplayer game anywhere you like, and terrify half the train or plane that you’re on with the uproarious laughter that House of the Dead encourages. Unfortunately, no one is going to want to play this with you because almost the second that you point the controller at the screen, it decides that it wants to float off into the ether, leaving you scrambling to re-centre it with a horde of zombies bearing down. You can re-centre with a single button press, yes, but in the heat of an arcade game’s action, that’s not really a process that you want to be focused on. The fact that you’ll be pressing it almost as frequently as the gunfire button is nothing short of ludicrous. As an alternative, you can play with a Pro controller and standard aiming, and though this is a little twitchy, it does at least have the benefit of the aiming reticule not deciding to go walkabouts in the middle of a boss battle. But this is a less than ideal way of playing a game where the core thrill was always that you were aiming guns at zombies. The JoyCon pointers do a nice job of emulating that (in the sense that pointing them abstracts the feel of a gun nicely). The controller has a vastly inferior feel to it, though at least you won’t feel like throwing it while playing.

Admittedly it has been some years since I played House of the Dead in the arcade now, but the developers seem to have decided to compensate for the aiming issues by slowing the action down and that just kills the visceral thrills of the thing stone dead. There’s nothing even vaguely creepy about this take on The House of the Dead, which has ended up somehow less exciting as a railgun shooter than Gal*Gun. And here the monsters aren’t anywhere near as visually appealing.

Would all of this be forgivable if there was something meaningful sitting behind House of the Dead? Sure. Is there something meaningful sitting behind House of the Dead? Absolutely not. The original is a visceral arcade game that never tried to be anything else. It was a fast, stupid thrill ride, where the longest cut scene lasts about three seconds, and if you’re really good at the game (i.e. spend a lot of quarters on many deaths from the difficulty of it), then you would reach the end in half an hour, feel great that you beat the game, and be told to get out so the next person could play. 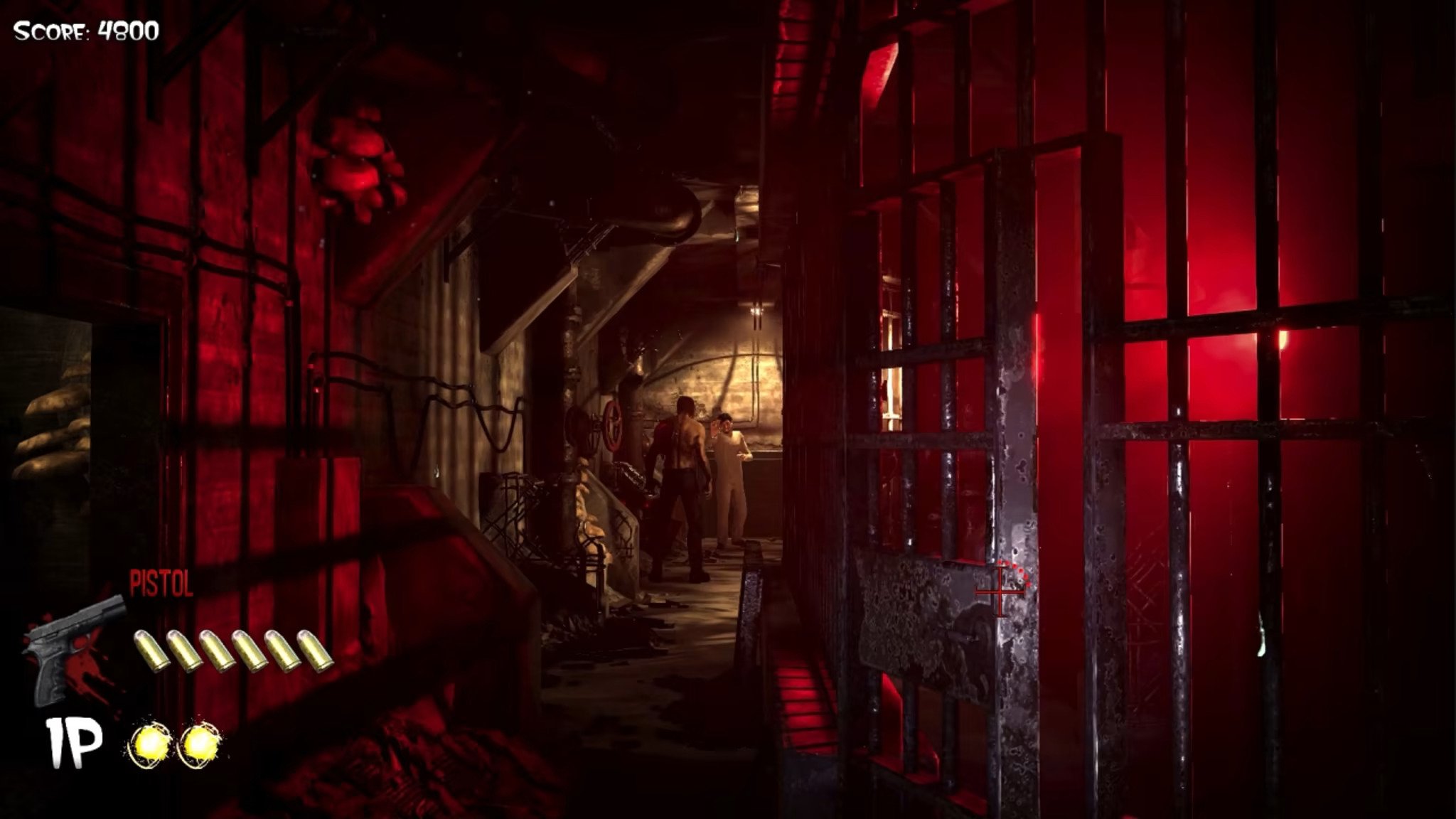 You can see the problem with this on Switch, right? The first time you play through The House of the Dead, where you have unlimited credits and the game doesn’t even bother with a Game Over screen (you just resurrect in the spot you lost your last life immediately), is the best experience you’ll ever have with it. After that, there are some mildly different routes to take to reach the same outcomes, and a high score system that only matters if you care about the game in the first place. The plot, characters and setting are pointless, the action is predictable, and therefore stops being exciting, and within about an hour, most people will be done with this. I’m always supportive of short games when they use their length to have a big impact on players, get them thinking, and give them something to come back to down the track. The House of the Dead has none of those things. It’s shallow entertainment in its truest sense and there have been far (far) better efforts to take the base House of the Dead experience and make it work outside of arcades.

The House of the Dead is a classic and monumentally important video game. I didn’t even bat an eyelid when this popped up on the eShop. Even knowing that as a Forever Entertainment project it probably wasn’t going to be all that, my fierce loyalty to the brand caused me to buy this instantly. As I wrote in the introduction to this review, however, The House of the Dead Remake makes Uwe Boll’s film seem like a masterpiece by comparison. At least Boll had the good sense to put gratuitous B-genre exploitation nudity and unintentionally hilarious directing in his film. His film was a thing you could enjoy drunk. You play this game and you’ll just jump straight to the hangover.

On bringing Chrono Cross back: Developer Q & A