Let’s get this out of the way from the outset: this is a Hatsune Miku game, and you all know how I feel about Hatsune Miku, so the score at the bottom of the review is going to be no surprise to you. It is what it is, so let’s all just move on with that. However, now we’re through the jokey “oh it’s Matt reviewing a Miku game”… if we put aside the actual rhythm games, Hatsune Miku Jigsaw Puzzle might well be my favourite in the expanding Hatsune Miku “series” to date.

I actually really like jigsaw puzzles. They’re right up there with the most zen form of entertainment there is. You settle down with a coffee or beer (depending on the time of day), and stare at a pile of pieces, clearing your mind of everything else so you can focus on a single, simple task: trying to form patterns and the associations between the tiny pieces come together to form a larger picture, and making methodical progress, bit by bit.

Then comes the sense of satisfaction of finishing a puzzle. Firstly, they’re satisfying because a jigsaw puzzle is a substantial project and there’s a basic sense of achievement in finishing the “task” (especially when you’re like me and typically look to 1,000+ piece puzzles), but there’s also a sense of satisfaction that comes from the sensation that you had a role in constructing the image. I’m a terrible artist (really terrible), and so I find a cathartic joy in jigsaw puzzles. They’re a small-scale mitigation against the lack of my art skills. I enjoy like paint-by-numbers for similar reasons: basically, I do get to feel like I’m creating an art work, even if I’m just piggybacking off someone else’s art. 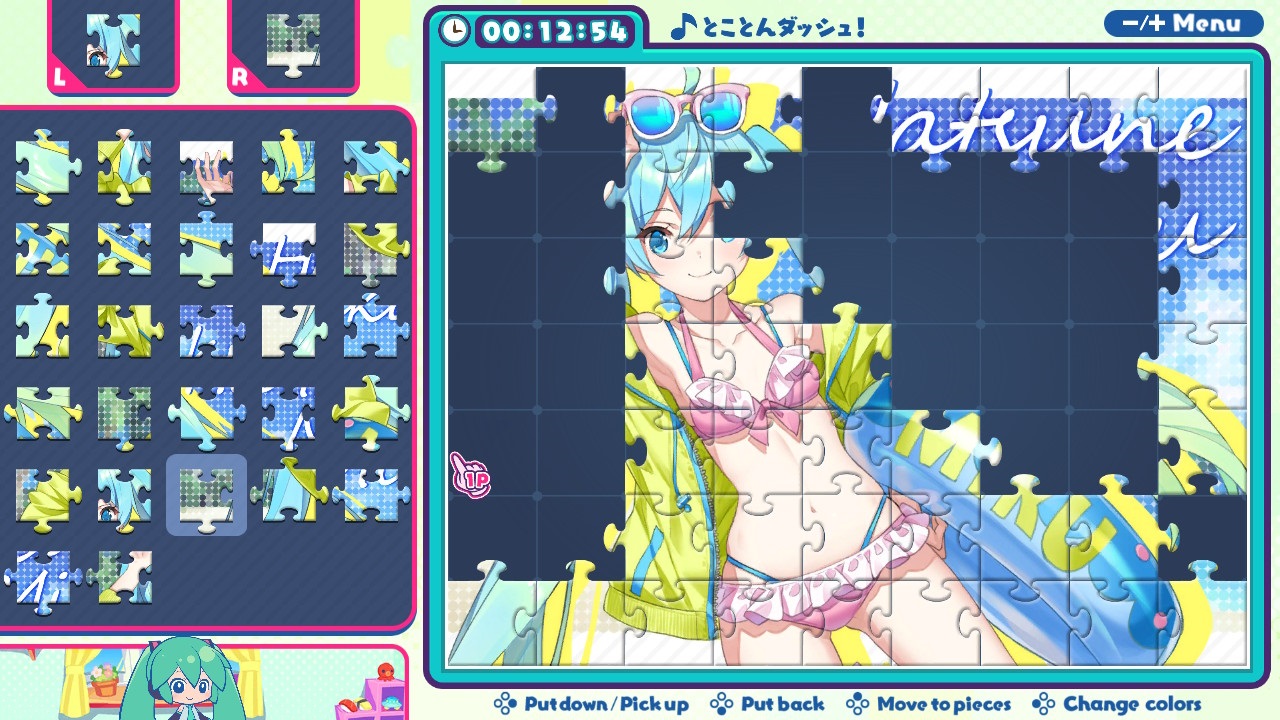 Unfortunately, jigsaw puzzles are, apparently, difficult to do in video game form. I say that because as far as I’m aware, before this Miku one, no one had managed to actually make a good jigsaw puzzle app. If you go looking for jigsaws on the Switch eShop, for example, you’re going to find a whole lot of shovelware with very little thought put into the interface, user experience or, frankly, the art. Most of the time these things really do look like someone ran a bunch of uninspiring Shutterstock photos through a jigsaw cutter piece of software, and then, for gameplay, simply dumped the entire load of pieces on a play field for you to manually sort through. Managing a mess like that to look for the pieces you want to use, and then getting them on to the “table”, was inevitably an unpleasant experience.

Hatsune Miku Jigsaw Puzzle has had some actual thought put into it. The playing field is nicely broken up into a grid, so you can see where pieces will go (though the grid are just squares, rather than the piece shapes in silhouette, so it doesn’t make the fundamental puzzling any easier). Arrayed on the left are the pieces, in nice, neat rows that you cycle through with the L & R buttons, and then, when you find the piece that you want, you select it from that menu, which drops it on the board to place wherever you like.

Is it a slightly streamlined take on the jigsaw? Yes. The pieces don’t need to be rotated, for a start, so some of the logical skills that goes into a jigsaw puzzle are not required when you play this game. But the trade-off to that is that you’re never manually sifting through virtual piles of pieces and fighting with the interface. What Crypton have achieved here is a puzzle game that doesn’t feel like quick-and-nasty shovelware, and that captures the most important essence of the jigsaw puzzle: it’s relaxing and enjoyable to play. 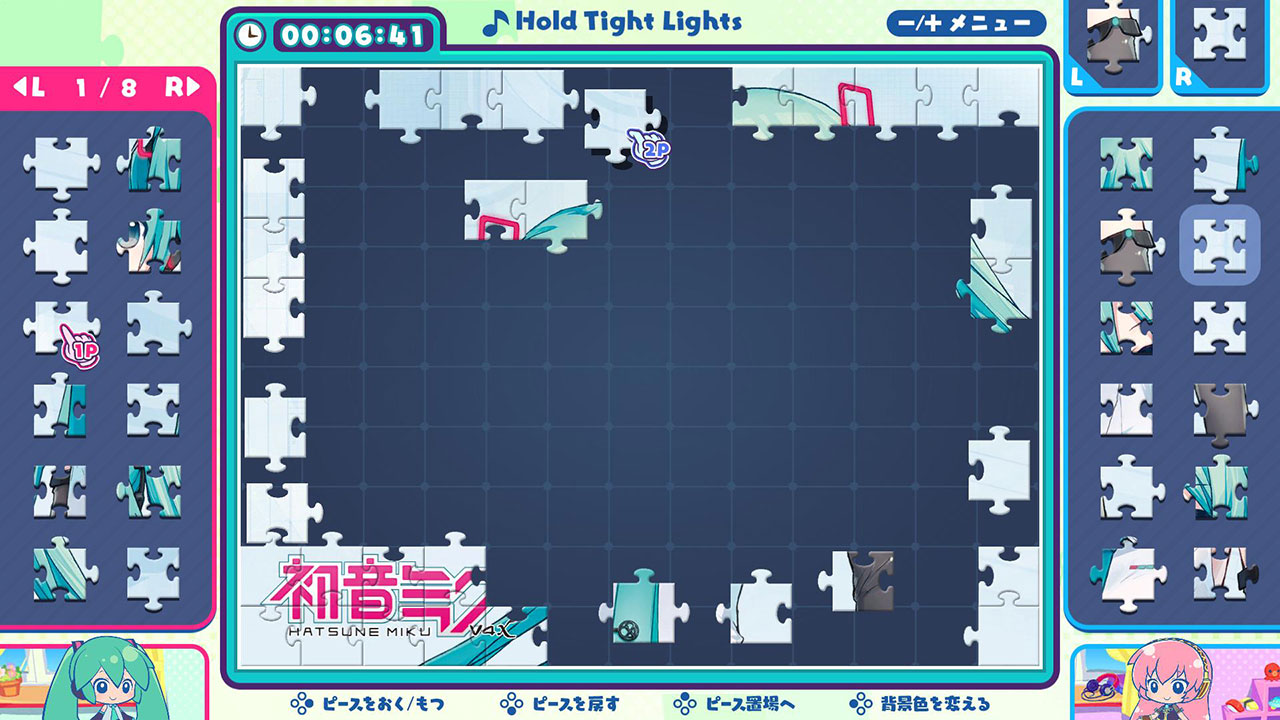 There are three difficulty settings, with higher difficulties having more pieces. “Easy” features 63 pieces, “Normal” 130 pieces, and “Hard” caps out at 300 pieces. As someone who only buys a physical jigsaw puzzle if it’s 1,000 pieces or more, I would have liked the option for a larger number of pieces, but I can also see how more than 300 pieces would have been unwieldy in a game that is trying to be as accessible, clean and efficient to play as possible. As it is, the three difficulty settings does still mean there’s a lot of raw content: there are 39 puzzles (Hatsune Miku fans will know why Crypton picked that specific number), and if you consider that it would take approximately 10 minutes to complete a puzzle on Easy, through to around 30 minutes for Hard, you’d be looking at close to 40 hours in total to clear everything that this game has to offer. That’s hardly a bad deal.

Most importantly, though, these are puzzles that you’re actually going to want to finish, and that is a stark contrast to the Shuttershock art that you simply won’t care about in other jigsaw apps. One of the greatest things about Hatsune Miku is the unbound creativity that comes with her image. Crypton actively encourages fan artists to do whatever they like with the character, and they’ve largely driven her popularity in turn. For this package, Crypton has gathered together some excellent art (I would buy all of these in actual jigsaw form), and then backed it up with a bunch of great, original music created just for this game. Combined, the presentation is flawless. If ever there’s a celebration of everything that Hatsune Miku has represented, it’s this exact thing: a highly accessible and entertaining game that players of all ages can enjoy, backed with stunning, varied art that showcases just how creative people can be with the character, as well as brightly charming music.

At this point it’s pretty clear that Crypton’s strategy has shifted from positioning Hatsune Miku as something associated principally with music, to developing an all-ages mascot character in the same vein as Hello Kitty, Rilakkuma, or Doraemon. I am quite certain that these light and casual little puzzle games are cheap to produce while Crypton builds its capabilities in this area… but at the same time, it is quite clear that these games do come from a proper company with a serious vision and a commitment to quality. Even putting aside my undying love for Hatsune Miku, this is genuinely the best digital jigsaw puzzle game I’ve played to date, and as a fan of jigsaws, this was the nicest of surprise releases.

Merch of the week: Coffee mugs!