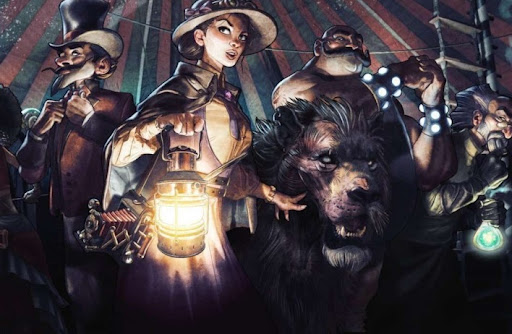 Article by Lindsay M.
So 2021 was a really great year for games. But what about 2022? How’s that shaping up? Yep, that’s right. We’ve turned our eyes forward and are now puzzling through what to expect from the year ahead.
Over this week, the DDNet team will share our thoughts about what our five favourite games of 2021 were, and what we are most looking forward to in the year ahead. First up is the news editor, Lindsay!

Dark Nights with Poe and Munro

I adore Dark Nights with Poe and Munro because of its pulpy spookiness. The FMV game is the third in a trilogy, but the other two aren’t necessary to enjoy it. The game contains six chapters, each with its own self-contained story. It follows Poe and Munro, colleagues at a radio station who have become *ahem* a little bit more despite Poe being married. Everything I look for in a game by this developed, D’Avekki Studios, is here: supernatural mysteries with a good helping of humour added to it, and characters I grow to care about. I legitimately do care about Poe and Munro and whether their relationship is good for either of them, but their banter and sparks make me lean towards them being perfect for each other. As an added bonus, one of the stories links to The Infectious Madness of Doctor Dekker, so fans of that game (like me!) will really love the flashback, and the story explains a lot about Munro while also humanising her. Dark Nights with Poe and Munro is available for iOS, PC/Mac via Steam, PlayStation 4, Nintendo Switch, and Xbox One.

Since its announcement, I was interested in Twelve Minutes. A point-and-click adventure stuck in a time loop, the story focuses on a man whose wife is accused of murdering her own father by a lone police officer. The cast is another reason to pay attention: the three main characters are voiced by James McAvoy (the husband), Daisy Ridley (the wife), and Willem Dafoe (the cop, incorrectly credited as the father on IMDB). The husband and wife settle in for a calm evening, although the wife has a surprise planned, when the police officer bursts in with his accusations. The husband will soon die, and the time loops begin. There is a specific order of events required to live, although it’s the mistakes that really help tell the full story. Twelve Minutes is available for PC/Mac, PlayStation 5, PlayStation 4, Nintendo Switch, Xbox Series, and Xbox One.

When it comes to games I’ve spent the most hours on this year, Cozy Grove is either at the top or very close to it (I spent a lot of time playing Ooblets in Early Access). I came across it when it launched for Apple Arcade in March, and have only missed a handful of days since then. It’s often compared to Animal Crossing, but aside from collecting things, I see very few similarities. The player’s character is a scout, and end up stranded on an island inhabited by ghost bears. Or is it bear ghosts? Either way, there are bears who died and are now ghosts. The scout is tasked with helping each bear remember their own life stories and come to terms with their death. There is resource management, crafting (you can decorate multiple campsites!), fishing, and mining, but the bulk of the game is in completing tasks for the bears to move their stories forward. What keeps me coming back daily months after completing the story is the collections: fruit, bugs, resources, cooked recipes, and more can be given to a certain bear to keep track of the collections. Cozy Grove is available for Apple Arcade (iOS/iPadOS, TVOS, MacOS), PlayStation 4, Nintendo Switch, and Xbox One.

The premise of Boyfriend Dungeon is a bit weird: your weapons can turn into humans, who you can then date. Of course, there’s more to it than that. The player moves to fair Verona Beach, where they begin to meet new people (most good, some creepy) and plunder the depths of recently-revealed dungeons under places like the mall and the nightclub. Each procedurally-generated dungeon is themed based on its location; for example, in the nightclub, you’ll be battling cocktails and unwanted affection. The game is incredibly inclusive, and the player can create a character of any gender, with any dating preference. It does delve into some tough subjects, like stalking, but it does so in a very smart and self-aware way. Boyfriend Dungeon is available for PC/Mac/Linux, Nintendo Switch, Xbox Series, and Xbox One.

You’d think that, as someone who has moved quite a bit in life (I’m 35 – or 36 depending on when this is published – and I’ve had 11 primary residences in my life), I wouldn’t want to play Unpacking. Why would I want to unpack more than I already have?! But there is something inherently charming and real about Unpacking that made it irresistible to me. It’s the story of someone’s life as told through unpacking rooms, apartments, or an entire house. By unpacking, you learn where this person is in their life. The most heartbreaking moment is when the protagonist moves into the apartment of someone who clearly has no room for them (in the apartment and in life), but as the player, you can’t stop it despite knowing full well it’s going to end badly. It’s a story told through objects (the only words are photo captions), and looking carefully at the objects is how story tidbits are discovered. Unpacking is available for PC/Mac/Linux, Nintendo Switch, Xbox Series, and Xbox One.

Okay, okay, I understand how overdone comic-inspired media is these days. I know. But I just can’t help my excitement over Marvel’s Midnight Suns. In the game, the Midnight Suns are a group comprised of characters with supernatural roots: Blade, Ghost Rider, Magik, and Nico Minoru. They’re called into a situation by the Avengers, so some of those characters will make an appearance, as well as many others. Hydra has revived Lilith, the Mother of Demons. Lilith wants to complete an ancient prophecy to summon her master, Chthon. The Midnight Suns will have to resurrect Lilith’s forsaken child, an ancient warrior known as The Hunter. The Hunter is the only person to ever have defeated Lilith. So why am I so on board for this game? It’s a story that hasn’t been beaten to death, and while we will see some characters who are definitely overdone (hello, Wolverine, I’m so over you), there will also be a good amount of lesser-known characters involved. Marvel’s Midnight Suns will be released for PC, PlayStation 5, PlayStation 4, Nintendo Switch, Xbox Series, and Xbox One in the second half of 2022.

Circus Electrique is a late addition to this list, as it was just recently announced. However, the one announcement is all it took for me to be hooked: the concept is bizarre in the best of ways. In Victorian steampunk London, random people are starting to turn into cold-blooded killers. A circus, no longer in its heydays, is still operating in the city, and as it turns out, only its performers can save the day. The battles are against common people, like bobbies or posh girls, and turn-based. That means you’ll see fights like clowns versus sailors, and other oddball combinations. But Circus Electrique is not just a turn-based RPG: it’s also a circus management sim. It’s everything I never knew I needed. Recruit new acts, train them, and bring the circus back to its former glory. Now, I need to mention one thing: when I wrote about Circus Electrique in the catch-up coffee, I questioned why one of its title words is English while the other is French. It turns out, it’s because the ringmaster knows his audience; they know what “circus” is in English, but not in French (“cirque”) but “electrique” sounds exotic. That just goes to show how much careful thought was put into the game, making it that much more appealing (I didn’t know that was possible). Circus Electrique will be released for PC via Steam/Epic, PlayStation 5, PlayStation 4, Nintendo Switch, Xbox Series, and Xbox One in 2022.

If I’m feeling down, Ooblets is the game I already turn to – and it is still in early access! It’s just too happy. The music, the characters, the graphics, all happy. The developers were aiming to launch at the end of this year, but unless it’s a surprise launch (which I honestly wouldn’t rule out) it seems like that will be pushed to early 2022. Ooblets is a farming/life sim combined with card battles and creature collecting. The player creates a character, and that character moves to a place called Badgetown. Badgetown has normal folk about, but it also contains small creatures called Ooblets. Ooblets can be battled with to collect a seed that can be grown into that type of Ooblet. The battles are card-based, and sometimes part of the story. Badgetown is being cut off from every other place nearby, and nobody is certain as to why. The story revolves around solving the mystery by restarting network towers in those places, but only after battling your way into them. Homes and farms can be customised, and the player’s character has lots of clothing to choose from. Sometimes I sit down to play one in-game day, but one is rarely enough because there’s always so much to do. I am so excited to be able to finally solve the mystery, as well as getting some well-earned achievements! Ooblets will be released for PC via Epic (it’s exclusive, there was quite the controversy around that) and Xbox One. It is available now via Early Access for both platforms, and it shouldn’t be too long for a final release.

I love art. I love museums. I love FMV games. I love murder mysteries. Logic tells me that I will love it when these four things are combined for D’Avekki Studios’ Murderous Muses. The game takes place in a procedurally-generated cursed art gallery. At night, mysterious rooms appear and portraits come to life. Not many plot details have been released, but we do know everything leads back to the murder of Mordechai Grey, a controversial artist. The game doesn’t have a finite ending, and is infinitely replayable. Murderous Muses will be released for PC and consoles in 2022.

If you follow my twice-weekly news wrap, the catch-up coffee, you’ll already know about Pupperazzi. It’s a game about photography and dogs. And more dogs. And even more dogs. The player’s goal is to get the best photo of a pup possible by dodging obstacles and performing stunts like double-jumps, then upload it to social media to try and increase their presence. To get the best photos possible, it’s possible to upgrade camera gear like lenses filters. In addition to photographing the dogs, you can play with the dogs, dress the dogs, dance with the dogs, and even terrorise the dogs (thanks, vacuum cleaners everywhere). There are different places to explore, including a lighthouse cove, a boardwalk, and a cityscape. Pupperazzi will be released for PC/Mac via Steam/itch.io and Xbox One on January 20, 2022.

Miss any of our DDNet Awards? Catch up on all of them here!