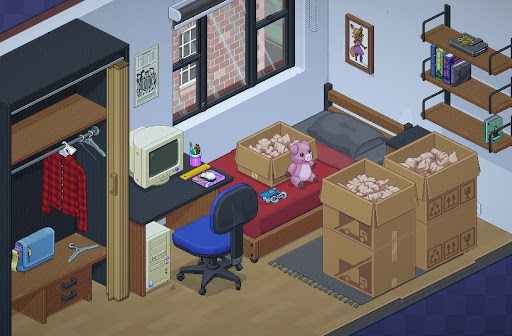 The concept of a puzzle game built around moving into a new house and unpacking boxes is a neat one. The process of finding just the right spot for every little object, piece of clothing, book, and so on is oddly soothing—especially in the context of a game, where you know there must be a solution, even if it’s not immediately apparent. That’s not something you can say about the real-life equivalent.

Unpacking takes that idea and delivers on it flawlessly, and yet, the satisfaction that comes from solving these organisational puzzles is the least memorable thing about WitchBeam’s latest outing. Rather, this is a game about the stories contained within all those mementos: the memories that live in what’s kept, and the snapshots of someone’s life that each box represents—both in what makes the move, and what doesn’t. This is where the real beauty of Unpacking lies.

The first level, taking place in May 1997, sees you unpacking a single room: a child’s bedroom. There’s a bunk bed with a desk underneath it, a few shelves and a small cabinet—not a huge amount of furniture, but enough for a couple of boxes’ worth of toys, school things, and clothes. Upon completion, a snapshot of the room gets saved in a photo album (which serves as Unpacking’s level select), with the caption “Finally, my own room!” 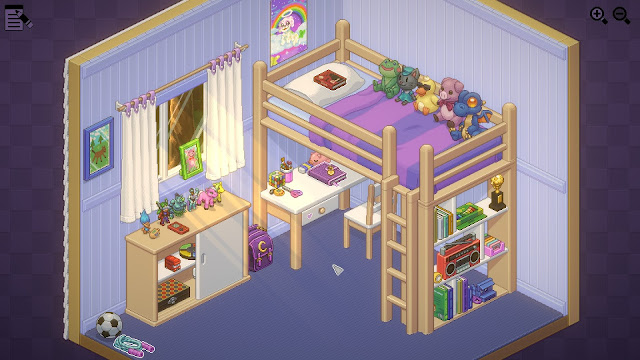 You’ll never meet this kid or see what they look like, but over the course of the game that follows, you’ll become intimately familiar with them. Each new move is a new milestone in life—moving out of home, moving into a bigger place, moving in with a partner, and so on—and the process of unpacking that life, again and again, paints a vivid picture of who they are and what they’re going through. Some objects will persist through every stage, from that kid’s first room in ’97 to the home they live in 20 years later. Some things will appear in one level and never be seen again: pieces of a life lived in that moment, but left behind as this person moves onto new, different things.

Life is a journey of ups and downs, and that sits at the heart of Unpacking. It’s easy to assume a version of this game that’s just an upwards progression through bigger and bigger homes, each one more elaborate, with more stuff to unpack—and, by extension, with trickier puzzles to solve. But that’s not the way life works, and so that’s not the way Unpacking works, either.

One of the most memorable levels sits about halfway through the game, in September 2010 Every home prior to that one is bright and colourful, the main character’s mark all over every room even when they’re sharing a flat. But suddenly, this level sees her moving into a cold, lifeless apartment high above the city, full of someone else’s stuff—not the mishmash of people’s lives coming together like they did in the previous stage, but a place that’s already in established and clearly belongs to someone very different. It’s a sudden jump in difficulty, simply because there’s not much place to put even the vastly reduced number of belongings she’s brought with her. The framed diploma that hung so proudly on the wall before? Here, the only place it fits is under the bed, hidden from view. Without so much as a single word, or even a character on screen, Unpacking draws a sobering image of someone giving up so much to be with someone who clearly won’t sacrifice a thing. 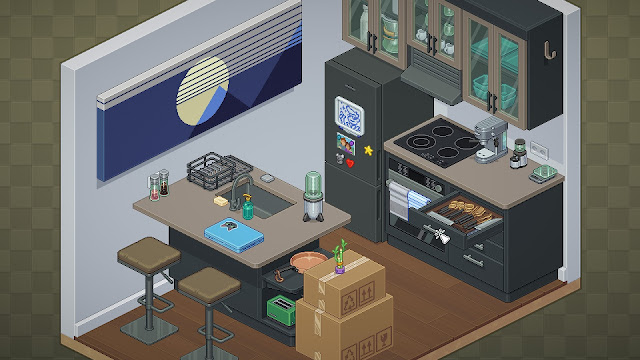 This is just one example of many. Unpacking is the story of a life lived, with all the joy, sorrow, heartbreak, and excitement that comes with that. Packing up your life and unpacking it again somewhere new is never just a utilitarian exercise; it’s a reflection on life itself, not just in the cherished memories tied to heirlooms, but in the choices about what we take with us and what we don’t, in where we move from and where to. Unpacking never forgets that.

But even if we ignore that powerful narrative element for a moment, the puzzle design alone is impressive. It’s deceptively simple: click on a box to pull out objects and find somewhere they’ll fit, and you pull out more stuff, the available space inevitably shrinks, so you have to rearrange things to make everything fit. But you can’t just dump stuff anywhere—things have to go where they make sense. If you try to store a frying pan under a pillow, you’re not going to have much luck.

The concept is clever, but the genius comes in the way the layouts of each room, right down to the position of the boxes you’re unpacking, feed off each other. It’s not uncommon to be struggling to find space, only to finally clear a box and discover that there was a whole set of shelves hiding behind it this whole time. Sometimes the things you unpack are storage solutions in their own right; other times, stray objects will wind up in boxes for completely different rooms, because that’s just how things roll when you’re packing to move. 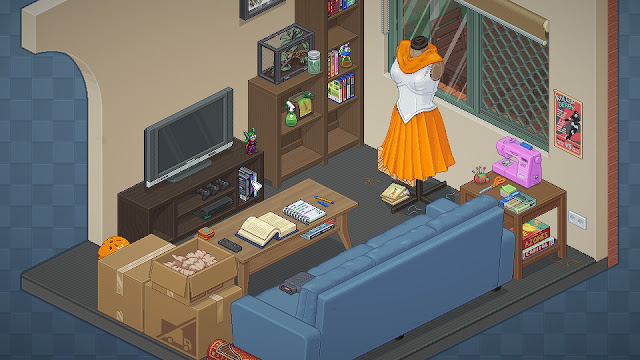 It never gets particularly difficult to find a solution that works (so long as you’re old enough to know what a GameCube is, I guess), but the fun and satisfaction of organising and reorganising a little pixel-art homes goes beyond just placing things wherever they fit and calling it a day. Even after a puzzle is solved, you’re free to go back in and rearrange to your heart’s content, take photos, and just enjoy the surprisingly soothing process of finding just the right home for everything.

But, like I’ve said, those nifty puzzles are just the jumping-off point for what makes this such a remarkable, memorable experience. A clever game of unloading boxes would have been enough to make Unpacking worth playing, but it’s the way it weaves its beautiful story through those puzzles that makes it truly sublime. 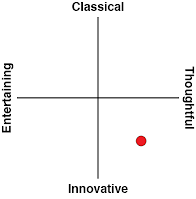