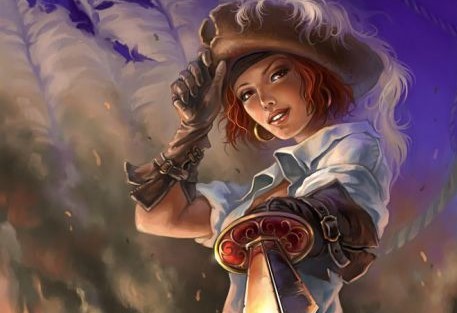 Ah yes. Emulation and piracy. Two of the favourite – and oldest – discourse topics within gaming communities. A white-hot wave of rage erupted today over an article on Kotaku that appeared to be supporting the piracy of Metroid Dread. A game that has been out for around 72 hours or so. See, some bright spark developed an emulator for the Nintendo Switch, and it seems that that emulator is particularly good. And the Kotaku writer seems to have appreciated it.

This naturally exploded in everyone’s faces. In part because people are forever desperate for a reason to be angry at Kotaku, but also because it’s Metroid Dread, and if the response my own review got from certain elements of the community was anything to go by, you just don’t mess with Metroid fans. This anger naturally resulted in a counter red-hot wave of rage directed back at the angry people. According to them, you’re a “simp for Nintendo” if you oppose the piracy of new Nintendo games. Or Nintendo, as a big business, doesn’t get to complain about piracy. There were even a few “take back the means of production” comments and while I don’t know how sincere those people are, I’ve just got to say this: you cosplaying as a communist to excuse your desire to pirate games that you are meant to pay for does not make you a comrade, folks.

Anyhow, the point is that there had been an unusually large number of really bad takes from just about everyone over the past day or so, even by video game standards. So, here’s the actual nuanced response for your future reference: 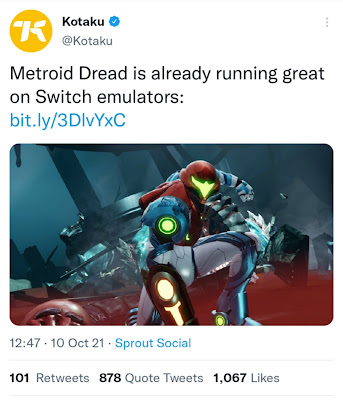 Emulators are not illegal. This is correct, and the people with that take are right up until that point. However, that they also think this justifies pirating Metroid Dread is taking their good take and flushing it down the toilet. Piracy – the act of playing a game on an emulator – is, in fact, illegal.

But here’s the thing. This isn’t really an argument over legalities. The legal argument is both limited and largely misunderstanding the point. The real matter for debate with piracy is morality, because what is legal can be immoral, and what is illegal can be moral. Here’s where things can get fuzzy.

So, to discuss the moral argument here. There’s nothing immoral about playing a game that is no longer being sold for a console that is no longer available on the market. For example, there’s nothing immoral about buying an Anbernic handheld console, loading it up with a ROM of Snow Bros., and reminding yourself that back in the day Bubble Bobble was completely inferior to those two little snowball-tossing weirdos. It’s not immoral to pirate that game because the developer and publisher of Snow Bros. is long gone, and until an arcade revival specialist like Hamster can gain access to the rights to Snow Bros. and re-release it on modern consoles (at which point you should revert to buying it), being able to access a game through illegal means is more moral than the law preventing you from accessing a work of art. 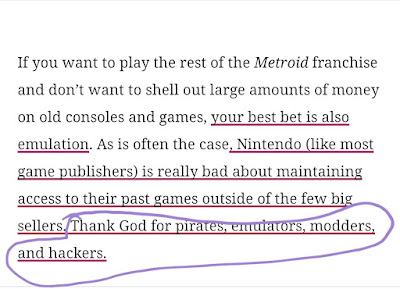 However, there is nothing moral about pirating a modern game, which developers and publishers are selling. Look, there is a lot wrong with modern capitalism, from the way it has made EA and Ubisoft go stupid with their respective game development and monetisation strategies, to the way that capitalism has driven endless devaluation of games making it hard for an independent developer to make and sell something that is actually worth playing. Capitalism is a thing that we can – and should – criticise. However, game developers and publishers also exist in capitalism and if games don’t sell, people lose jobs. And under capitalism, people who don’t have jobs suffer.

I think we can all agree that taking actions to cause suffering is immoral, yes? I know there’s a broader philosophical debate about that (that has been raging on for thousands of years, no less), but on a basic level, our understanding of virtue is largely wrapped up in the idea that the virtuous don’t cause suffering. Pirating a new game doesn’t serve a greater good, and yet each person that does so is making an act, however small, to cause suffering. Therefore it’s an act that lacks virtue. It’s immoral. Part of the process of pirating Metroid Dread is legal. Part of it is illegal. Neither is relevent, because on a much more basic moral level, you just shouldn’t do it.

So, no, Kotaku. Let’s not “Thank God” for piracy. Let’s try acting like reasonably intelligent, mature, and decent human beings, understand where the line between ethical piracy and unethical piracy is, and most importantly of all, let’s not encourage people to do the unethical one.

Poll of the week: Which platform (aside from PC) supports indies the best?